Foals can be brought along as hand horses

The horse training covers a wide range of methods for the training of horses . Depending on the area of ​​application, from horse races to heavy trains to therapeutic riding for the disabled, various training paths are followed.

Throughout history, horses have been trained for war , cavalry , agriculture , sport, and transportation . Today, training is mostly geared towards leisure activities or sports. However, horses are also trained for special purposes, such as stunt horses for the film industry, circus , police work or animal-assisted therapy .

excessive joy in running in a foal

Common to all training methods are the basic concepts of animal training . Since horses are much bigger and stronger than humans, they must first learn not to injure humans. The horse's natural behavior must be incorporated into the training so that the horse can understand the trainer's goals. Horses are social herd animals which, when treated properly, learn to respect, obey and trust a human being as a guide .

The first thing to do is to make the escape animal horse safe to handle, so that everyday situations can be mastered safely. As prey animals , horses have an innate flight instinct. You have to learn to rely on humans to help you decide whether flight is the right response to an unfamiliar situation. You can't just let instinct guide you.

Most horses complete the same training levels at the beginning of their training path.

Foals can to people in the first days of life marked with situations like hooves lifting, touching all over and the human voice are familiar. However, there is also the opinion that it is better to leave the foal alone with its mother for the first few days so that the bond between mare and foal is strengthened.

Most of the time, the suckling foals get used to humans while they are still too small to be dangerous to humans. This is how the foals learn that a person is not a danger, but that it must be respected.

The foal must learn during the care to be quiet, the hooves scrape leave, as well as deworming and veterinary treatments, such as vaccinations to accept. Foal hooves must be cut out regularly by a farrier . The young horse should let itself be caught in the pasture , let itself be loaded into a horse trailer and lose its fear of loud, fluttering things. It should be familiar with the hustle and bustle that people spread. For example, it should know about cars, radio music, the rattling of garbage cans and the like.

Some foals are either for lack of time or out of conviction only at weaning from the mother to the holster used to. Weaning is a difficult time for the foal in which it likes to join people. 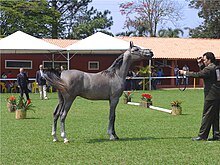 Arab yearling on a show

As a yearling, the young horse should be capable of haltering. That means it should be able to be holed up and carried with the halter. It should not only be possible to walk at a step, but also to trot on commands, to keep pace and to stop and to stand tied for a certain time.

If the halter ability was not achieved in the first year, the yearling will be trained further. Yearlings are taller and less predictable than weaners. They are more easily distracted, even by the first signs of sexual maturity . However, they are still easy to shape, quickly grasp and do not yet have the full strength of a full-grown horse.

Yearlings can learn simple commands to march or stop, or learn the correct line-up for a breed show . Sometimes they also learn more difficult tasks, such as covering with a horse blanket , scissors with a clipper, washing hooves with a bucket, or hosing down the horse's legs with a water hose.

Young horses are seldom left alone by humans until they are old enough to break in. You then complete the halter training and the basic equestrian training in one go. Waiting until the horse is fully grown before training can be more dangerous for the people involved, as considerably more skill is required to avoid injuries. 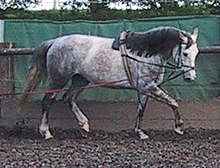 A young horse tied up on the lunge

Yearlings and two-year-olds can be further encouraged with ground work and build up their first muscles. Most of the time, however, only deepen what was already learned as a foal and ensure that it remains used to humans. During this time, something that has been missed can still be made up with a little extra effort.

In growing young horses, bones and joints are still soft and tender. In order to avoid damage to joints and cartilage , horses must not be seriously worked too early. In particular, strongly curved lines, such as round pen and lunging , should only be required by two-year-olds.

With the help of serenity training , they can be introduced to initially frightening situations (flutter tapes, umbrellas, balls, rappelsack, tarpaulin lying on the floor). You can get used to a saddle , bridle , bit or harness without actually riding or harnessing the horse.

A horse can only be broken in or run in if it knows and tolerates all equipment, reacts to voice commands and understands rein aids. The horse must be able to stand still, be harnessed in front of the wagon and be harnessed again or saddled and unsaddled. It has to be able to wait quietly while the driver or rider climbs up and down. It should be able to master simple tasks such as marching off, stopping, changing pace and turning.

In addition to the mother, foals can get to know traffic

Driving off the ground while training a draft horse 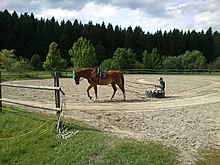 Moving in with a dragging load

Horses can be harnessed earlier than ridden because they do not have to carry any weight in front of the wagon. Normal warm-blooded animals can be strained as early as two years of age . There are different ways to bring a horse in.

The young horse can initially run next to a team to get used to the situation and the noises.

When the horse walks confidently on the long rein, the harness can be adjusted and then stretched in front of a beam, tractor tire or some other load that does not roll. The horse learns to pull and not to step over the strands. The load should not be too light so that the horse really has to pull, but of course not so heavy that it is overly stressed. A load dragging on the ground is slower and less dangerous than a wagon , and it is less likely to tip over because of the low center of gravity . At the beginning the horse can also be led by the head, then it has to learn to cope on its own. Depending on the circumstances, intermediate steps can be omitted or added.

To drive in in front of the carriage, the young horse is usually harnessed as a hand horse in a pair on the side facing away from traffic . On the traffic side, an experienced horse, on which the young horse can orient itself, is harnessed. A light, robust training car is suitable for this, as the young horse should not pull hard.

A young Lipizzaner in the Spanish Riding School with saddle , bridle and Cavesson so he can lunged before riding

The age at which horses are broken in depends on the breed and area of ​​activity. Many thoroughbreds run their first race when they are two years old . They are often broken in before they are two years old. This is possible because the English thoroughbred has been bred for precociousness for two hundred years and because jockeys are very light. American workhorse breeds, such as the quarter horse , are usually broken in at the age of two.

Young horses with good basic training should not be afraid when they get up for the first time. You will just consider it just another exercise and will rarely hunch back, back down, or go over your head. You can get them used to the weight on your back in advance.

In principle, horses can also be broken into later, even if they then no longer learn as quickly. An older horse that has already had a good basic training can usually be broken in more easily than a wild horse caught as an adult , for example a mustang. However, it may be easier to break in an adult wild horse than a domestic horse with bad habits.

There are different views and ways to train horses. The further training is described under the respective disciplines and riding styles.