from Wikipedia, the free encyclopedia
This is the sighted version , flagged on August 13, 2020 . There are 2 pending changes that have yet to be viewed.

The Icelandic horse , also called Icelander or Icelandic pony , is a versatile and robust breed of horse or small horse that originates from Iceland and can also be ridden by adults thanks to its strong physique. Icelandic horses belong to the group of gaited horses , as most of them not only have the basic gaits of walk , trot and gallop, but also the genetically fixed gaits of tölt and / or pass . Only pure-bred animals are recognized as "Icelandic horses", without cross-breeding with foreign blood, whose ancestry can be traced back to Iceland without any gaps. In Iceland, the importation of horses is prohibited to prevent disease. As a result, horses that were born in Iceland and have once left the island cannot be brought back to Iceland.

Background information on horse evaluation and breeding can be found under: Exterior , interior and horse breeding .

Thick mane of an Icelandic horse

Icelandic horses vary in type. While many - especially older horses - are of the pony type , an elegant, flexible, well-muscled Icelandic horse in the riding-horse type with a beautifully carried, expressive head and full tail and mane hair corresponds to the current breeding goal of FEIF . However, this breeding goal is controversial, as is often shown in the IPZV association organ "The Icelandic Horse".

Icelanders are robust and weather-resistant , as is typical of the breed , because they develop a particularly thick winter coat that enables them to overwinter outside in their Icelandic homeland.

An Icelandic horse is only fully grown when it is around seven years old. In view of the horses' late physical maturity, they are only ridden between the ages of four and five. Icelandic horses usually get quite old, 30 to 35 years and more are not uncommon. Often the horses can be ridden well beyond their 25th year of life.

What is wanted is a versatile riding horse for leisure and sport that can be ridden by adults and children. An Icelandic horse should be tough, independent, social and easy to handle, be frugal, have a good will to walk and have a good and balanced character.

Icelandic horses are basically physically and mentally strong and healthy. However, problems with the so-called sweet itch and spat can occur.

Summer eczema is an allergy to the saliva of a species of midges (Culicoides sp.) (Not native to Iceland ) , which leads to severe itching in the affected horses, often in connection with insufficient exercise, incorrect feeding or overfeeding. In percentage terms, horses imported from Iceland suffer more often than those raised on the continent. The tendency to eczema is hereditary, in certain breeding lines the disease occurs significantly more often than in others. Horses kept in the lowlands fall ill more often than those in the mountains or near the sea. In the meantime, so-called eczema blankets and certain preparations can keep the unpleasant consequences of the disease within limits.

Spat is an inflammation of small bones in the ankle joint , which ideally leads to ossification and which occurs more frequently in pony breeds. During the inflammatory process, sick horses become more or less lame. After the ossification process is complete, a certain stiffness of the hindquarters is usually observed. Icelandic scientists recognized the heredity of Spat and recommend breeding based on it. Since 2006, all stallions (5 + 6-year-olds) who take a material test according to the FEIF Icelandic Horse Breeding Regulations (FIZO) for the first time in Germany have had to present a late examination.

In addition to the well-known basic gaits of walk, trot and gallop, most Icelanders today have mastered the gaits tölt and pass. The gait spectrum of Icelandic horses moves in many variations from four-gaited to five-gaited, whereby the breeding goal often achieved today is an Icelandic horse with expressive movements that is easy to ride in all gaits.

Gait riding is demanding and also requires very good equestrian knowledge and skills from the rider, which can only be achieved through specific training on gaited horses. Only a well-trained rider is able to optimally ride an Icelandic horse according to its gait.

The foot sequence of the tölt corresponds to that of the step and is a clear four-beat. In contrast to walking, where two and three-legged supports alternate, a tölting horse only has one or two hooves on the ground. Due to the missing jumping phase, the rider sits on a tölter with almost no vibrations or swings comfortably up and down, almost like in a chair, with horses with high movement. The horse goes upright under the rider and "dances" out of the shoulder. Tölt can - depending on the gait disposition and level of training of the horse - be ridden almost from walking pace to canter speed (Renntölt).

The tölt gait is very pleasant for riders and has contributed significantly to the popularity and spread of the Icelandic horse.

The world records in racing pass in 2012 were: 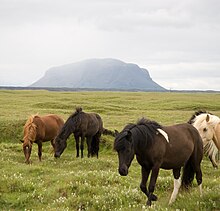 A herd in Iceland

The horse import ban has been in place since 1909. Especially geldings of other breeds, e.g. B. Fjord horses, previously found their way to Iceland as work horses. Today's Icelandic horse breed developed from the then existing mixed population of Nordic pony and Central European horse breeds. Historical texts suggest, however, that individual thoroughbred horses also inherited in Iceland.

To this day, Icelandic farmers mainly breed horses and sheep. Large parts of the herds graze unsupervised in the highlands in summer (a form of mobile pastoralism ) before they are driven back on horseback in September. The horses have always been used to obtain meat. Only about 40 percent of the horses bred are used in breeding or as riding horses. While there have always been and still are real meat horse breeding in the grassy southern region of Iceland, farmers in other regions have specialized in breeding riding horses, with hard selection. In the north of Iceland in particular, equestrian sports are more important. The horses from this region are also bred much narrower and more elegant than the somewhat coarser ones from the south.

Until about 1926 Icelandic horses were needed in Iceland as riding and pack animals because there was no road network. The Icelanders remembered this achievement when they erected a monument to their pack horse in Reykjavík . Icelandic horse breeding subsequently experienced a decline. At the end of the forties, however, the turning point was achieved and the almost exclusive breeding goal “riding horse” established itself. In the 50s and 60s the Icelandic horse experienced an export boom. The main market was Germany, where the Icelander gained particular popularity as a recreational horse, to which the Immenhof film series , based on the works of the author Ursula Bruns , later publisher of the specialist magazine “Pony Post / Freizeit im Sattel”, played a key role. Later the priority of breeding and riding in Germany developed towards the gaited horse that we know today. In contrast, the objective of a versatile, compactly built all-terrain horse "for the whole family" took a back seat, which was also due to the rising price trend. In 1967 the federal association IPZV eV was founded. Well-known German riders such as Walter Feldmann and Hans Georg Gundlach developed gait riding from the fundamentals of dressage riding and brought the knowledge back to Iceland.

Today Germany is the largest breeding and exporting country for Icelandic horses after Iceland.

Traditionally, Icelanders get Icelandic names in all countries, connected by the word “frà” or “von / vom” with the name of the farm or stud.

Icelandic mare with foal in Iceland

In Germany, the breeding season usually begins on June 1st so that the foals can be born in the pasture after an eleven-month gestation period in May. The herd of mares is put together one to two days before the start of the breeding period in order to avoid conflicts of rank during the breeding period. During this time, the Icelandic stallion and the mares are part of the herd association (natural jump). In the mating period of six weeks, there are two horse periods of the mares four weeks apart, which are covered with 90 percent certainty, a value that is unmatched by other covering methods. Stallions usually cover up to 30 mares over two periods (twice six weeks). Some stallions only or additionally cover by hand, this way more mares can be covered. Artificial insemination of mares is practically not used.

The gestation period is 11 months. In Iceland, Icelandic foals are born in the mother mares herd without human support and remain in this herd until the beginning of December, after which they are separated (weaned) from the mother mares and raised with foals of the same age. At the end of the first winter, the yearlings are separated according to sex. Young stallions are neutered between the ages of one and three.

Icelandic horses traditionally live robustly in free-range herding, which means that they are kept outdoors all year round if possible. In large herd of riding horses, geldings and mares are often kept separate to avoid injury, especially when there is a high fluctuation within the herd.

In winter, riding horses are usually kept near the stable in paved runs with protection from the weather.

In the 1930s and 1940s, the Heck brothers crossbred Icelandic horses in addition to Przewalski horses and other domestic horse breeds with wild horse characteristics in order to obtain an image breeding similar to the original Tarpan , which is known today as the Heck horse .

According to statistics from FEIF (the international association of national Icelandic horse associations) from 2010, there are over 300,000 Icelandic horses worldwide. Most of the horses are in motherland Iceland, around 78,000. After Iceland, Germany is the largest breeding area for Icelanders with around 65,000 horses.

In some nature reserves in Central Europe (such as the Netherlands), Icelandic horses are used due to their properties as robust horses for year-round extensive grazing in order to keep the areas open.

Icelandic horse sport tournaments differ from "normal" riding tournaments, as the four or five gaits of the Icelandic horse in particular are shown on an oval or pass track. There are also special gait tests only for the gaits tölt or racing pass as well as pass races. The Hestadagar competitions were specially developed for recreational riders .

The Icelandic horse is the only breed for which a world championship is organized. The 1st International Gæðingakeppni Championship took place in 2012 in the gaited horse center in Aegidienberg in Bonn instead.

In Icelandic there is only the word hestur for horse and in the absence of other Equus breeds on the island, no further distinction is necessary; Ponies are generally referred to as smáhestur , "small horses". In Iceland, the term Icelandic horse is preferred. Icelanders are morphologically considered to be a pony breed based on their breed origin and size . In Germany, however, there is the designation small horses , to which the Icelandic ponies may be counted.