The malleolar fork is held together by the distal tibiofibular syndesmosis . Syndesmotic injuries are found in around 16% of all ankle injuries and are typically also present in Weber C and sometimes Weber B fractures of the outer ankle . A distinction is made between four bands :

The mechanics of the upper ankle joint does not quite correspond to a hinge joint , because its axis runs diagonally through the ankle roll and the ankle joint fork. This allows - described simplified - the reduction ( plantar flexion ) and the lifting of the foot (dorsal flexion or dorsiflexion ). In addition, a small amount of internal and external rotation as well as an inward ( pronation ) and minimal outward rotation ( supination ) of the ankle roll is possible. According to the neutral-zero method , the range of motion (plantar-dorsal) thus covers a range of 50 ° –0 ° –30 °. However, the ankle roll does not have the full shape of a cylinder , as it is wider at the front than at the back. The slight movements to the side ( abduction and adduction ), which are greater when the foot is lowered, are hardly possible when the foot is raised. The ankle joint is one of the most heavily stressed joints in the body, as it has to carry the entire body load with every step and transfer it to the ground. 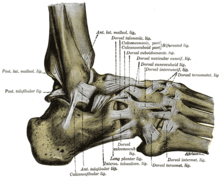 This high load and the incompletely cylindrical anatomy as well as the different design of ligament connections result in a wide range of injuries, which primarily affect the ligaments, but also the bones. Ankle injuries are extremely common. " Sprains " and " twisting " of the joint are particularly common.

In the ankle joint, without previous injury, signs of wear ( arthrosis ) develop less often than in other joints . Most of the arthroses of the ankle are secondary (post-traumatic) arthrosis, i.e. the long-term consequences of severe or inadequately treated injuries such as ankle sprained fractures or complex capsule ligament injuries . Developments and techniques that are fully developed on the knee joint to improve the cartilage surface (transplantation of cartilage cells or cartilage-bone cylinders) or to replace it with an endoprosthesis (artificial joint) are now also successful in the ankle. The treatment options are still limited, especially because the joint is irregular and very narrow and therefore not as easily accessible to a variety of arthroscopic treatments as the knee joint, for example. Basically, in many cases, a graduated therapy scheme is used and conservative treatment (including technical shoe measures) is started, which in some cases leads to years of relief from the symptoms. If these possibilities are exhausted when osteoarthritis develops, there are essentially two surgical therapy options: the stiffening of the upper ankle joint ( arthrodesis of the ankle joint ) or the installation of an artificial joint ( ankle joint endoprosthesis ). 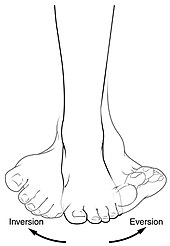 This axis of movement of the lower ankle joint runs from the center of the scaphoid to the outside of the calcaneus. The angle to the horizontal plane is approximately 30 °, the angle to the sagittal plane is approximately 20 °. In the lower ankle, only two movements are possible: 20 ° eversion (lifting the outside of the foot) and 35 ° inversion (lifting the inside of the foot) from the neutral position .

Ligaments of the ankle

View of the medial ligament of the ankle

The outer ligaments are particularly often affected by twist injuries; in this case one speaks of an outer ligament rupture . Ankle injuries often lead to damage to the capsular ligament apparatus (ligament strain, stretching, tearing). Bony injuries are rare (fracture of the outer and inner ankles, rupture of the connecting ligament between the tibia and fibula). The ankles are very often affected, accounting for around 20% of all sports injuries.