An arthroscopy (from the Greek arthros = joint , and skopein = to look ) (syn. Joint mirroring ) is a minimally invasive diagnostic and / or therapeutic treatment of joints via small incisions ( arthrotomies ) using an endoscope (also: arthroscope ). Outside of joints, the general term endoscopy is used (from the Greek éndon = inside and skopein = to look ). The most common locations for arthroscopic techniques used are the large joints (knee, shoulder, hip, elbow and ankle joint). Due to technical progress (smaller arthroscopes and instruments), arthroscopy is also finding its way into smaller joints (e.g. wrist and lower ankle).

The Dane Severin Nordentoft (1866–1922) is considered to be the founder of arthroscopy and was the first to use the term “arthroscopy” (“arthroscopia genu”). In 1912 at the German Congress of Surgeons in Berlin, he first described the technique of knee arthroscopy using a trocar endoscope, a modified cystoscope. However, it is still unclear whether he only used the technique described on cadaver knee joints or also on patients. A few years later the Japanese Kenji Takagi (1888–1963) also performed arthroscopies on cadaver knee joints, developing increasingly smaller instruments based on cystoscopes . He took the first intra-articular color photos in the 1930s and published his work “Das Arthoskop” in 1938.

At almost the same time, the Swiss surgeon Eugen Bircher (1882–1956) published the first clinical publication in 1921 with 19 cases from the Swiss Cantonal Hospital in Aarau . From 1919 he performed diagnostic arthroscopies on living people. Bircher used nitrogen or oxygen as the arthroscopic medium. He performed arthroscopy to diagnose meniscus damage , which he then treated with open surgery. In total, he performed around 60 arthroscopies by 1930. In 1930 he gave up the technique and finally used double contrast arthrography to diagnose meniscus lesions. The Japanese Masaki Watanabe (1911–1995), a student of Kenji Takagi, further developed arthroscopy and carried out around 800 arthroscopic operations on the knee joint by 1957.

Robert W. Jackson (1932–2010) from Toronto learned these techniques from Masaki Watanabe during stays in Japan in the 1960s and introduced them to North America . Due to the rapid technical progress ( cold light , camera unit, flexible fiber optics , water pumps, etc.), arthroscopy has seen rapid development in the last few decades.

The following equipment is required to perform an arthroscopic operation:

In addition, arthroscopic working instruments are required that differ from open surgical instruments in terms of their size and length (e.g. tactile hooks with scaling, arthroscopic scissors, arthroscopic grasping forceps, knot pusher, etc.). In order to avoid excessive water pressure loss, the portals can also be secured with self-closing cannulas (rigid or flexible).

The arthroscope is inserted into the joint via a standardized portal using a stab incision. In the case of small joints, it is necessary to fill the joint with fluid before entering it with the trocar in order to lift the joint capsule from the cartilage and to facilitate entry. In addition, a work portal will be created for introducing the instruments under view. The diagnostic arthroscopy includes a complete tour of the joint, whereby the joint structures are checked visually, functionally and palpatory (tactile hook). The condition of the most important structures and the measures carried out are documented in standardized form using photos.

Arthroscopic procedures are mainly performed on the knee, shoulder, hip, elbow and ankle. You will there u. a. used to remove free joint bodies and to restore the mobility of the joint ( arthrolysis ). 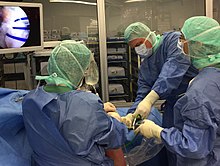 Performing an arthroscopy on the knee joint

Arthroscopy of the knee joint (knee endoscopy , knee arthroscopy ) is the most widespread arthroscopic procedure and has the classic arthrotomy for many indications. H. Opening of the joint, detached. Nowadays, knee joint arthroscopy is used as standard for the removal of free joint bodies, knee joint mobilization (knee joint arthrolysis), cartilage diagnostics or, in some cases, surgery, meniscus surgery and cruciate ligament reconstruction. In the most common cases, at least two portals (on both sides of the patellar tendon = patellar tendon) are set and these are used as camera or work portals. Depending on the indication, additional portals can be used.

Hip arthroscopy was initially developed as a diagnostic tool for inexplicable hip pain. Nowadays, however, it is already used in a standardized manner for treating changes in the hip joint. The most common arthroscopic interventions in the hip area include impingement surgery (hip trimming, acetabular surgery, labral surgery), removal of free joint bodies, ligamentum teres injuries and interventions outside the actual hip joint (e.g. psoas release, tractus release).

Elbow arthroscopy has become increasingly important in recent years. In addition to the therapeutic aspect, the dynamic arthroscopic examination of the elbow also plays an important role in recognizing possibly undetected instabilities (e.g. postero-lateral) and treating them appropriately. The spectrum of common arthroscopic interventions includes the removal of free joint bodies, joint mobilization (arthrolysis), the removal of painful mucosal folds (plica) and cartilage diagnostics with cartilage therapy if necessary.

Elbow arthroscopy has particular advantages in the treatment of diseases and injuries to the child's elbow. In children and adolescents, not only is the relatively smaller joint an aggravating factor in treatment, it is also important to protect the growth plates. The minimally invasive nature of arthroscopy allows cartilage damage and other problems to be treated successfully without increasing the risk of complications.

Arthroscopy of the anterior joint compartment of the upper ankle joint has been widespread for many years and numerous interventions can be carried out here: removal of free joint bodies, joint mobilization (arthrolysis), removal of painful scars (meniscoid), expansion of the anterior joint space in soccer's ankle (bone attachments to the Front edge of the tibia, which lead to restricted mobility) and cartilage diagnostics with cartilage therapy if necessary. Arthroscopy is now also finding its way into hindfoot surgery (e.g. resection of painful os trigonum) as well as surgery of the lower ankle.

This means viewing and examining a joint using arthroscopy without any therapeutic measures. The knee joint mirroring enables z. B. the view of the articular surfaces of the thigh , lower leg , kneecap , cruciate ligaments and menisci . Additional instruments are also used for diagnostics, e.g. B. a tick to test the cruciate ligament stability.

A purely diagnostic arthroscopy has only rarely been indicated since the introduction of MRI .

Interventions on neighboring bones, e.g. B. in the context of an osteosynthesis of a joint fracture, can also be checked by diagnostic arthroscopy for the correct repositioning of the fracture fragments and a stepless joint surface.

This is used for injuries or degenerative changes in joints . As therapeutic measures, cartilage lesions can be smoothed ( shaver system ), torn cartilage fragments removed or reinserted , ligaments and menisci removed, smoothed or sutured. In addition to the arthroscope, this requires another access to the joint for the corresponding tool.

Examples of therapeutic arthroscopy are:

In osteoarthritis , the therapeutic arthroscopy of the knee is one of the most frequently performed operations. A therapeutic benefit has not yet been proven. In evaluating eleven studies with more than a thousand patients, the Institute for Quality and Efficiency in Health Care was unable to determine any effect that went beyond a placebo effect.

One advantage of arthroscopy is that the joint does not have to be opened completely in order to view or treat structures. The minimally invasive access is tissue-friendly and access morbidities (e.g. detachment of tendons / muscles) can be avoided. As a result, a number of comparative studies documented reduced postoperative pain symptoms compared to open procedures. In addition, the small stab incisions produce a better cosmetic result than the open surgery. Another advantage is the ability to dynamically assess joint structures during joint movement (e.g. impingement = entrapment). The smaller wound area also reduces the risk of infection compared to open surgery (see section “Complications”). An estimated 400,000 arthroscopic procedures are currently being performed on the knee joint in Germany.

In addition to wound healing disorders and residual joint effusion , joint infections can rarely occur. The likelihood of infection after knee arthroscopy is significantly lower compared to the open procedure and is given as around 0.08–0.13%.

Further cartilage injuries can occur during arthroscopy. In particular, the intraoperative administration of a local anesthetic or the use of a pain pump with a local anesthetic for postoperative pain therapy increases the risk of chondrolysis and subsequent osteoarthritis .

After knee joint arthroscopy, there is also an increased risk of thrombosis , which is 0.25% for symptomatic venous thrombosis (1 thrombosis per 400 arthroscopies), and for pulmonary embolism (symptomatic in 0.17% = 1 in 588). In a large retrospective analysis, the risk was still increased in women who took contraceptives (0.63% versus 0.30%) and in patients over 50 years of age (0.51% versus 0.34%). The gender or the indication of the procedure had no influence on the risk of thrombosis. The overall mortality was 0.04% within the first three months after knee arthroscopy.

During a 30-day follow-up of over 12,000 knee joint arthroscopies carried out in the United States, one patient died ( mortality 0.008%), complications were found in 1.6% of all cases, with venous thrombosis being the most common complication in addition to a necessary reoperation. In the multivariate analysis, the main risk factors for a complication were a previous operation in the month before the operation ( odds ratio OR = 6.33) and an operation time of one and a half hours (OR = 1.84).

In the German-speaking area, doctors working in arthroscopy are organized in various associations ( AGA , BVASK , DGOU ). Arthroscopy is also promoted by topographical specialist societies (e.g. German Society for Shoulder and Elbow Surgery e.V. (DVSE), German Association for Foot and Ankle Joint e.V. (DAF), Deutsche Kniegesellschaft e.V. ( DKG)). With approx. 3,900 members (as of 06/2014) the "Society for Arthroscopy and Joint Surgery" (AGA) is the largest European specialist society in the field of arthroscopy.