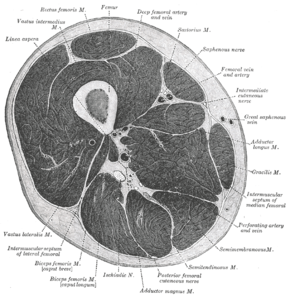 Cross section through the thigh

The thigh ( Latin femur ) is the part of the leg or the hind limb between the groin and the knee or between the buttocks and the lower leg .

The thigh is supported by the thigh bone ( os femoris or femur for short ). This is filled inside with fine spongy trabeculae ( cancellous bone ), which are aligned along the mechanical load lines (trajectory lines). They allow a very high stability with the lowest possible material consumption and weight. Furthermore, the gaps are also filled with bone marrow and are therefore used for blood formation . The bone marrow is partially replaced by adipose tissue in old age .

The anatomical position of the thigh bone when walking upright is remarkable : Due to the special shape of the hip joint (see below), the thigh bone is crooked in the supporting leg , so that the body weight does not project through the middle of the bone in which position it would be stable. Due to the misalignment of the bone, the bone shaft ( corpus ) experiences high bending stress towards the outside and threatens to break . This is prevented by a tension belt on the shaft. This tension band is carried out laterally by a wide tendon plate ( aponeurosis ) on the lateral ( lateral ) thigh side, which reinforces the thigh ligament ( fascia ) ( fascia lata ) ( iliotibial tract ) and from the middle ( medial ) from the predecessors, especially the great pre-leader ( Musculus adductor magnus ). This can be illustrated particularly clearly in people with increased stress on the thighbones (e.g. sprinters or weightlifters) using the hypertrophy of the tensor fasciae latae , which tensions the tendon plate.

The joint between the hip and the thigh ( hip joint , articulatio coxae ) is a nut joint , a special form of a ball joint in which the joint head lies beyond its equator in the joint socket. The joint-forming bones are the head of the thigh bone ( caput ossis femoris ) and the socket of the pelvis ( acetabulum ).

The joint between the lower leg and thigh ( knee joint , articulatio genus ) is a bicondylar joint , the joint surfaces are the articular knots ( condyles ) of the thighbone and the shinbone ( tibia ). In this joint, in addition to pure bending ( flexion ) and stretching ( extension ), rotational movements ( rotations ), e.g. B. in the final rotation of the knee extension, as well as shifts ( translations ) forwards and backwards possible. The flexion of the knee joint is thus a combined rolling ( Athro ) and sliding movement ( osteokinematics ) of the femur on the tibia plateau .

The femur is a whole series of muscles as origin and insertion point , z. B. the outer hip muscles and the lower leg muscles . The actual fleshy mass of the thigh, however, forms the thigh muscles, which can be divided into three groups:

Arteries from the internal iliac artery

From the internal iliac artery arise for the supply of the buttocks and thighs:

Arteries from the external iliac artery

Course of the arteries in other mammals

In domestic animals , the arteria profunda femoris and the arteria circumflexa femoris medialis for the inside of the thigh originate from the external iliac artery . The continuation of the external iliac artery from the point where it crosses over to the inside of the thigh is also referred to as the femoral artery . This artery is used as a pulse sensing point in dogs, cats, sheep and goats . Originating from the femoral artery:

From the hollow of the knee, the continuation of the femoral artery, as in humans, is called the popliteal artery .

The venous outflow of the thigh can be divided topographically and functionally into two sections: the superficial and the deep venous system.

The deep venous system is made up of veins that run parallel to the corresponding arteries and are also referred to by the same name. The most important vein in this system is the popliteal vein , which merges into the femoral vein .

The thigh, like the rest of the leg, is supplied by the nerves of the lumbosacral plexus .