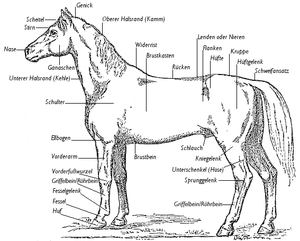 As exterior the appearance and the physique of a is called horse . The exterior and interior determine the usability of the individual animal, and the purpose of the breed is determined through them in the breed description .

The structure of the horse is roughly divided into forehand (head, neck and front legs), metacarpus (trunk) and hindquarters (croup and hind legs).

In horses, the term dry in the head and legs area is synonymous with well-contoured, as opposed to spongy . Used on the body it indicates a well-trained horse with only a very thin layer of fat . Thoroughbreds, for example, have a predisposition to a dry physique, while cold-blooded animals tend to have a predisposition to a spongy physique, but may well have a dry head.

The frame of a horse is the ratio of shoulder and croup length to stick size and body length. So a horse with a large frame has long shoulders and a long croup in relation to its size. A large frame indicates good mobility and is therefore desirable for sport horses.

The term nobility , or noble , is used ambiguously:

The horse's caliber is the ratio of weight to height .

The performance or suitability of the horse is not influenced by the shape of the head. Only a pike head that has been bred out too much does not offer enough space for the bit, which is why the diet has to be adjusted. With normal feeding, the teeth would wear out prematurely from the abrasion. Therefore an extreme pike head can only be found in show horses, but not in race horses.

Ganaschen is the name given to the semicircular rear area of ​​the lower jaw. A too tight position of the ganches makes it difficult or even impossible for the horse to assume the posture required in dressage . Therefore the Ganaschen size is one of the decisive factors for the suitability for equestrian sport.

When riding, you need a neck that bulges slightly and, like the reins, has its highest point on the poll. Furthermore, the topline of the neck should be well muscled (training question) and the neck should be sufficiently long. If the neck is too long and strongly arched, the highest point may be behind the neck. This is known as the gooseneck and is not desirable for riding, as it easily removes the horse from the reins . A steep neck set too low ( deer neck ) is also undesirable, as it makes correct posture very difficult or even impossible for the horse due to incorrect muscling (lower than upper line of the neck). A neck that is too short also affects the suitability for equestrian sport, as the horse cannot balance itself so well.

Relationship between body length and height at the withers

As work riding horses that should be used all day, square horses are preferred, which is why these are usually found in western riding . The reason for this is the higher load on the back from the rider's weight. It is more difficult for a longitudinally rectangular horse to carry the rider for long periods of time without breaks. In dressage, the longitudinal rectangular horse is preferred due to the better back freedom (mobility).

The withers of the horse essentially determines the position of the saddle and is therefore of great importance for riding horses. If the withers are too flat, the position of the saddle is unstable. In the past it was common to use a tail strap to prevent him from sliding forward, but this method should now be avoided in the interests of the horse. If the withers are too high, there is a risk that the saddle will slide too far back. In this case, it must be fixed with a breastplate .

The back should be strong and swing freely in order to be able to take the weight of the rider well. Too short a back can easily make the horse tight, making it useless for dressage. Too long a back makes it difficult for the horse to step under enough to get the weight on the hindquarters. In dressage, a not too long rectangular horse is desired, which on the one hand has the necessary freedom in the back and on the other hand is not too long.

The same high withers and croup are desired for all riding horses. For racehorses, a covered (higher) croup, which allows a greater jump length, is advantageous, for draft horses a slightly lower croup can be advantageous. Also Quarter Horses are often built over.

Faults in the back are the swayback (a downward arching back) and the carp back (an arching of the back). The back of a carp robs the horse of the necessary flexibility and thus also makes it unusable for riding. Also in front of the carriage, saddlebacks and carp backs cannot be used, as the backward pressure of the harness cannot be correctly transferred to the hindquarters here.

The croup (corresponds to the buttocks ) is also a decisive characteristic for the usability of a horse. A very straight, flat croup, as is often found in racehorses, is conducive to a flat, fast canter, but at the same time it is a hindrance to a high load-bearing capacity and can also hinder a good stepping under in the gathering . A steeply sloping croup, on the other hand, is good for the load-bearing capacity and is also desirable for heavy draft horses, but is a hindrance for dressage and show jumping . In dressage and show jumping, the sloping, well-rounded croup is desirable, which also offers optimal freedom of movement with good load-bearing capacity. In cold-blooded animals, a split croup is desirable - the croup looks as if it were split due to strong muscle building.

The essential feature of the legs is the correct position. All misalignments lead to increased stress on the joints and should therefore be as low as possible if they are present.

The strength of the cannon bone (third Vordermittelfuß- or rear pastern bone ) is often used as an indicator of Spring suitability, since not long grown too weak Röhrbein the heavy loads landing. In general, it is also used for the horse's resilience due to the rider's weight.

The joints should also be exactly one above the other when viewed from behind. Malpositions seen from behind:

Correct hoof position plays a decisive role in the strain on the flexor tendons during movement, which is why it is of great importance in any case. The angle between the fetlock and cannon bone is used as a measure of the hoof position.

Since the fetlock joint is a kind of shock absorber for the horse, the horse is softer or harder for the rider to sit depending on the bondage. A soft bondage is more prone to tendon injuries and patency. If the imaginary line through the fetlock joint, crown joint and hoof in the fetlock joint is broken, one speaks of a bear-pawed hoof position. It makes a horse unsuitable for any load because the flexor tendon is significantly overused.

The coat colors of horses (see also genetics of horse colors ) and their markings are only of interest for color breeding.

Like the color of the horse, the long hair is also not a characteristic of performance, but in some breeds, such as Friesians and Andalusians , great value is placed on full long hair, since such breeds are also used as show horses.