This article looks at the specific hair shape. For the German cyclist see Erich Mähne . For other meanings, see long hair (disambiguation) .

Long hair is a special form of hair that occurs in some animal species . As their name indicates, they are particularly long and have a long growth phase. In addition, they are relatively thick and therefore only slightly deformable. The long hair serves primarily as protection against insects or to mark differences between the sexes (lion's mane). The hair on the head of humans is also long hair. 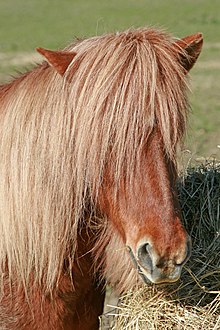 Dense forelock and mane of an Icelandic horse , long guard hairs on the lower jaw

In addition to the top coat, horses also have long hair.

The long hair includes the head ( Latin: Cirrus capitis ), mane (Juba) and tail hair (Cirrus caudae) . Forehead, mane and tail do not serve as protection from insects, as is usually assumed, but were specifically bred for a long time through selective breeding with horses that do not shed the long hair when the coat changes due to a genetic defect called hypertrichia. One can often observe that horses keep each other free of insects by flapping their tails, but insect scare away actually happens through targeted muscle contractions.

As Köten ( Cirrus metacarpeus or metatarseus ) long hair on the fetlock joint of the horse called. The fetlocks protect the fetlock bend from moisture by allowing the water to drip off along the fetlock hair and thus be conducted past the sensitive fetlock bend. In the case of strongly pronounced fetishes one speaks of fetlock hangings or fetlock hangings . A strongly pronounced droppings is characteristic of many draft horses . Some horse breeds (for example Friesians and Tinkers ) are bred for rich long hair and droppings. However, if there is excessive droppings, it hardly dries off properly in the wet season, and there is an increased susceptibility to Mauke . You must always shave in the direction of your hair in the droppings region so that a small amount of the droppings remains and water drainage is guaranteed.

Long hair, which is used to drain water, is commonly called awn hair . Horses also have guard hairs on their lower jaws, ears, and along their legs that water can drain off. Northern pony breeds in winter coat, in particular, often have pronounced guard hairs.

From a chemical point of view, long hairs are natural substances with a high protein content , more precisely keratin content .

A horse for a tournament spruce , the mane is often intertwined , for example in a Spanish braid . 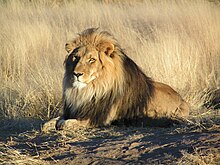 At the tip of the tail of various mammals, such as cattle , donkeys , zebras and pigs , there is also a tassel made of long hair. The goatee (barba) is typical of goats .