Assembly is a term used in equestrian sport and, from a holistic point of view, encompasses the physical, mental and emotional readiness of the horse to move directly in any direction of the room. People can make use of them as riders, but also from the ground, through suitable communication aids. So a sick, mentally jaded horse or too young, physically and mentally immature horse will never show a meeting in the real sense. Visible from the outside is the lowering of the horse's hindquarters , which increasingly takes up the weight of the rider and horse. The assembly is the sixth and last point on the training scale of the German Equestrian Association . It is defined as “that state of the horse in which, in order to combine all forces for a specific purpose, it relieves its forehand by increasing the load on the bent hind legs”. The gathering is important not only for dressage , but also - albeit to a lesser extent - for jumping and eventing .

According to the dressage guidelines of the International Equestrian Federation (FEI), the meeting serves firstly to develop and improve the equilibrium of the horse, which is disturbed by the additional rider weight. Second, the horse's ability to bend the hind legs more should be increased so that the forehand is relieved and more flexible. Third, the gathering contributes to the ease and self-holding of the horse and makes riding more pleasant. Depending on the degree of assembly, "posture and permeability can be increased to their maximum". According to Seunig, “permeable obedience in the congregation” is the “crown of training”. He points out that "not all horses" can achieve the same high degree of assembly. If, however, a horse is able to “allow itself to be gathered together at times to a self-holding position, in which the front and rear pair of legs each have to carry half the load and which goes so far that in individual lessons the hindquarters most of the Load, if not all of it willingly and resiliently absorbs ", it is" superior to all other horses ".

Assembly is achieved by lowering the croup (the rear part of the back between the waist and neck of the horse tail) and by Hankenbeugung with arched back and from the withdrawal and straightening of the horse's neck. 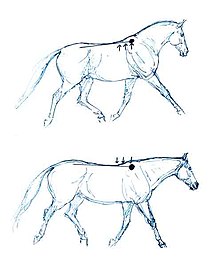 Above a assembled horse, below a horse on the forehand 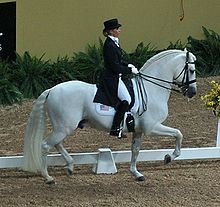 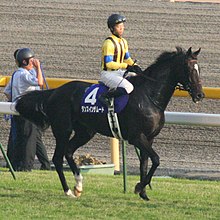 Trot on the forehand without any gathering

Under Hankenbeugung is meant an enhanced angulation of the knee and hip joints and stronger in front and behind legs beneath the horse's belly (so-called sub-set ). The bending of the hips reaches its highest increase in lessons of the high school of dressage equestrianism such as piaffe or levade .

When erecting the horse's neck, a distinction is made between the false absolute or artificial erection, in which the rider / driver causes the erection by pulling the reins without the croup being lowered accordingly, and the correct relative or natural erection, in which the straightening occurs of the horse's neck corresponds to the lowering of the croup, d. H. is offered by the horse itself without muscle tension. The "eased forehand gets a freer and more elevated front and rear exit - shoulder room ", the horse goes almost "uphill".

Further "unmistakable signs" of the meeting are the "supple play of the back muscles ", the "looseness and permeability", the "energy of the swing" as well as the "posture" and the "attention", which is also defined as physical and mental "willingness to perform" become.

The increase in the thrust generated in the assembly "through increased driving is [...] intercepted with persevering or accepting rein aids , returned via the permeable back, whereby an increased load-bearing capacity is achieved."

A criterion for the amount of gathering that one can expect the horse to be, are "space and swing in the middle trot ", but also the rhythm .

For the young horse, Seunig recommends “the first trot meeting is best done by picking up from a lively and fluid middle trot”, whereas a “shortening of the working canter is achieved by frequent canter”. An “increase in the gathering” is only possible if “the flexibility and load-bearing capacity of the hindquarters allow the additional load”.

The approaching from holding as well as the galloping from the step or, if the ability to collect is already greater, also from holding have a gathering effect. If done properly, these transitions are an "unmistakable test of whether the horse is gathered and permeable to the aids". In order to maintain “freshness and liveliness”, the assembled trot should “only be ridden over short distances and always alternating with freer gears”. In the gathering canter work, it is not “the shortening of the jumps per se” that matters, but rather the “preservation of the lively freshness”, the “liveliness and purity of the jump in the straight direction ”.

The assembled step is loud Seunig "undoubtedly one of the most difficult tasks for the rider." Also this pace should "always be ridden only on short distances."

So-called gathering lessons are worked to achieve and improve the congregation. Their perfection is also a measure of the horse's increasing ability to gather.

If a sufficient amount of meeting has been established, lessons can also be demanded that can only be offered without errors from within the meeting.

Mastering the assembly requires a high degree of trust between horse and rider, as well as the stamina and muscle strength of the horse. It is demanded more and more as the horse's training progresses and finds its climax in the lessons of the high school .

A logical sequence of ever stronger gatherings can be recognized in the lessons of classical equestrian art , in the following order: