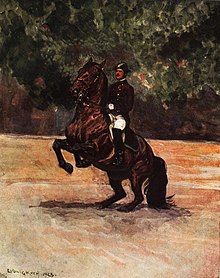 large picture: Levade,
above: development from the piaffe,
below right: uncontrolled ascent.
Drawing by Ludwig Koch

The levade (French: se lever = to rise ) is an exercise in classical equestrian art in which the horse shifts its weight to the bent hind legs, raises its trunk at an angle of less than 45 ° to the ground and pulls the front legs towards the body . If the angle is larger, one speaks of a pesade . The two terms levade and pesade were synonymous until they were distinguished by Gustav Steinbrecht at the end of the 19th century .

The Levade under this name has not been passed down from before 1850, but Pluvinel already gives a similar description of the development of the caper:

“In order to achieve good capers, one must begin with what is hardest for the horse, which is to get up in front and bend its legs, shortly afterwards it is necessary to get it to rise in the back in the way that I do Your Majesty declares. "

The levade is one of the schools above the earth of horsemanship. These are divided into surveys (levade and pesade) and school jumps ( croupade , ballotade , caper , Viennese courbette ). The levade is first trained on the hand before it is performed under the rider. It is developed from the piaffe , in which the horse already gathers strongly . The lesson "is to be completed by slowly sinking down".

In the Spanish Riding School , the levade is also used as a preparation for school jumps.