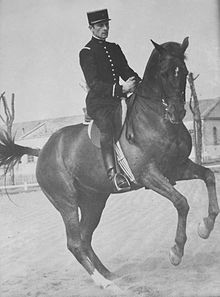 Gallop pirouette, performed by a rider of the Cadre Noir

A pirouette is a movement of the horse in equestrian art and a lesson in dressage riding . Especially the "turn around the hindquarters galloping" belongs "to the Higher campaign - and High School " on, "as they carried out correctly, already such a degree of collection requires, as it only after several years of training may be required and only above average beanlagten horses ".

Pirouettes are ridden as a step, canter and piaffe pirouette on two hoof beats . The forehand moves in a circle around the hindquarters, which however also describes a very small circle around a center point as close as possible to the inner hind leg. The inner rear foot stands out clearly from the ground and rests “in the same place or only very slightly in front of it” or describes a “small circle as possible”. The horse is most gathered and is placed and bent in the direction of motion; the pirouette is a sideways movement, but by definition does not belong to the side movements .

The canter pirouette is usually performed as a full, half or double pirouette, the whole (360 degrees) in 6 to 8 gallop jumps , the half (180 degrees) in 3 to 4 jumps. The horse should jump evenly in (three) beats in as close a circle as possible, neither simply twisting around the inner hind leg, nor jumping with both hind legs at the same time. A military instruction from 1743 states:

“ A hussar must be able to frolic in a place like a plate on his horse and turn as he wants. "

During the pirouette, every single gallop jump should be ridden: "like with a gallop". Attention must also be paid to keeping the beat . The inner gluteal bone is more stressed, the inner thigh is driving on the girth and provides the necessary flexing of the ribs, the shortened inner rein gives the horse the position and acts sideways, but must not block the inner hind leg. The outer leg lies behind the girth and ensures that the horse is led around with the other aids , while the outer rein acts as a guardian and limits the position.

The horse must have such a degree of permeability in these lessons that “the rider is always able to interrupt the sideways movement and convert it smoothly and without hesitation into a straight one”. Of course, the rhythm and momentum of the pirouette must not be lost.

According to the guidelines, the prerequisites for the gallop pirouette are 1. "Safe control of the assembled gallop" with increased bending of the hind legs and load bearing on the hindquarters, 2. the horse should "control the gallop traversals on both hands" and 3. the horse should "be able to to perform some shortened gallops in a high gathering ”.

Prerequisites for the step pirouette are the hindquarters turn, the short turn and the collected step "which is developed through frequent riding of transitions".

For practice purposes you can first do quarter pirouettes and then half pirouettes. The guidelines recommend the following exercises, especially for working out the canter pirouette :

Seunig recommends working out the canter pirouette with the involvement of Travers and Renvers: Reversing volte in Travers (= Passade) from the second corner of the long side, continued about five to eight paces away from the gang in outer canter, transition to Renvers canter and just before the corner half pirouette.

The guidelines name the most common mistakes