The term Arab is an umbrella term for horses that are of Arab origin in appearance and origin, regardless of whether they are recognized by the World Arabian Horse Organization or not.

In a narrower sense, the term describes a separate breed group within the Arabian horses. Horses whose blood is not pure enough to be considered thoroughbred Arabs , but whose proportion of foreign blood is too low to be assigned to one of the three other breeds ( Shagya Arabs , Anglo-Arabs or Arab half-blood ) are classified into the Arabian breed group to become. The stud book of the Arabian breed is kept in Germany by the Association of Breeders and Friends of the Arabian Horse VZAP and the Breeding Association for Sport Horses of Arab Descent ZSAA.

Arabs are often very temperamental. They are very popular for trail riding or long distance rides due to their willingness to work and their hardness. Arabs tolerate high temperatures and high humidity and were bred for endurance performance. The history of the Arabian horses explains their success: for centuries they were the beduins' riding animals, lived in hot climates, moved on difficult terrain and had to cover long distances with scarce rations. Arabs naturally have indestructible legs and are extremely enduring. 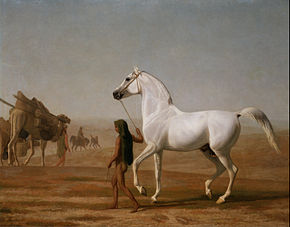 Representatives of the Arabian race group include: B .: