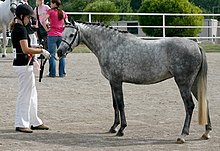 Thanks to their strong stature, Icelanders can also carry tall men over long distances.

Children on ponies in Brisbane, 1940 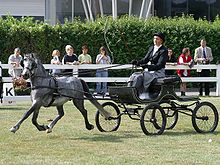 Welsh A as a driving pony with an adult driver, 2003

A pony is a small horse .

The typical pony breeds are landraces , which are characterized by stocky stature, short, strong legs, small, hard hooves, short facial skull with a broad forehead, pronounced nostrils, small ears, rich long hair with dense Schweifwurzelbehaarung (called Pony bell), strong nerves and Leichtfuttrigkeit ("Good feed converters"). They are used as riding, carrying and draft animals. They are usually strong enough to carry adults too. Due to their great robustness, breeds of this type are almost exclusively used in semi-wild keeping for year-round grazing in grazing projects. In their social behavior, ponies are characterized by a comparatively short individual distance and strong herd ties.

Sports-type pony breeds are drawn to riding horse points, such as a longer back, a good saddle position, expansive gaits and jumping ability, and are used in pony sports. These pony breeds were often refined with Arabs and, depending on the degree of breeding, show flowing transitions between pony type and warm blood type . Well-bred sports ponies often look like miniature riding horses and, because of their light build, can usually not carry adults for long periods of time. These ponies are usually not as easy to feed as the classic pony type.

When used in tournaments, ponies and small horses must not exceed a certain height . The FEI sets this height at 148 cm. In Germany a further distinction is made between

Feeding typical pony breeds differs from feeding warm-blooded animals . A typical pony requires significantly less concentrate than a warm-blooded animal. Without work, in maintenance feeding, good pasture in summer and hay and water in winter can suffice. If necessary, it is appropriate to give mineral feed. Excessively fat willows and too much concentrated feed represent a great danger, which can cause laminitis , crab and colic . An excess of mineral feed can also cause hoof damage.

The following important information is missing from this article or section:
Historical usage is missing, cf. for example pit horse
Help Wikipedia by researching and pasting it .

Ponies are used as children's ponies, in recreational riding and in pony sports.

Due to their size, pony breeds are particularly suitable for children and smaller, lighter adults.

Icelanders, Haflingers and Norwegians can also carry heavy adults due to their strong build. For inexperienced riders and children, the typical pony breeds are often better suited than large horses, as they are usually not yet able to sit out a large horse swinging in the back with sweeping gaits .

Icelanders have their own mass sport competitions, the Hestadagar , as well as a tournament scene with gait tests .

In equestrian sports, pony riders are in the age group up to 16 years. In order to participate in pony tournaments , the height of the pony must be certified. Sports ponies that come close to the permitted height of 148 cm are called final size ponies. Final size ponies look like miniature riding horses and, due to their light build, can usually not carry adults for long periods of time. There are both jumping and dressage tests for pony riders.

In Germany, in addition to the internationally common distinction between pony and large horse, there used to be the designation small horse. With a size of more than 130 cm and less than 147.3 cm, the small horse was located between the pony and the large horse. Small horses were understood to mean, in particular, those breeds that are listed above in the “Leisure horse” section.

Today in the insurance industry, the term small horse is used as a synonym for pony in connection with horse liability insurance , where the tariffs differ for small and large horses .

The singular is the pony (plural: the ponies ). The hairstyle, on the other hand, is called the bangs . A male pony is called a pony stallion, a female pony mare, a young pony is a pony foal. The name pony originally comes from the Latin pullus , meaning foal (later also pullanus , young stallion). From then old French poulain or poulent became in Scottish poulenet in the pronunciation “pulnei” and later “punei” in the spelling powney , which then led to English powny and finally pony , which was then borrowed from there in the 19th century. Pierer's Universal Lexicon of 1847 already states that ponies “… a very small, graceful, but powerful and very hairy horse breed " and one " [...] the smallest ponies [...] on the Shetland Islands , Iceland , Norway , Öland etc. Corsica ; somewhat larger [in] Wales , Galloway , Sardinia a . the Pyrenees ” .

In the following, some typical pony breeds known or widespread in the German-speaking area are listed.
Pony type: