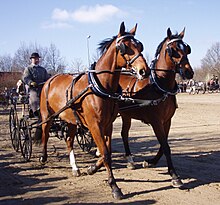 Driving is a form of equestrian sport and in the broadest sense refers to driving with carriages and wagons .

On driving competitions is switched in general, driven two- or four horses. Most tournaments consist of tests in the disciplines of dressage , off-road driving and obstacle driving . These can be scored individually, but there are also combined tests in which the team with the best results wins all three partial tests.

Benno von Achenbach was the pioneer of driving . Even today, the Achenbach driving system is still used at all German tournaments under the umbrella organization of the FN , other recognized driving systems such as Hungarian tension are tolerated. “Not driving to Achenbach” leads to a low point deduction (0.5 points) according to the LPO (performance test regulations).

Here a prescribed dressage task is completed on a driving arena. As in riding, the dressage task consists primarily of certain hoof beat figures that must be performed in the specified gaits (walk, trot, rarely also gallop) and in the required gait (e.g. working trot, strong trot). The focus is on gymnastics and the level of training of the horses. In the judges' assessment, value is also placed on stylish clothing, carriages of traditional construction and equipment (whip, carriage lamps, etc.) as well as matching horses (see also equipage ). Dressage is rated with grades between 0 and 10 with tenths of a value. Many organizers require the achievement of a score of at least 5.0 in order to be allowed to drive the following terrain or obstacle test. 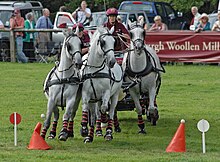 A ball falls while skittles

Hunting for points , the obstacle with 120 points is more difficult than the pair of cones with 40 points, in the background a time-consuming labyrinth is set up that is worth the most points

The obstacle driving is also called cone driving. It all depends on the horses' speed, skill, obedience and permeability. Depending on the degree of difficulty of the test, up to 20 pairs of cones are set up on a course, the distance between them being about 20–50 cm further than the carriage track . The pairs of cones are to be passed as quickly as possible within a specified distance without knocking over a cone or throwing off a ball that is lying on the cone. The cone gates are numbered with a red number on the right and a white number on the left. Anyone who misses a goal or drives from the wrong side is disqualified.

There are several different alignment methods for the assessment. So z. B. the judging procedure according to penalty points and time. So it is only scored after mistakes and only afterwards according to time, the team with the fewest penalty points wins and, in the event of a tie, the team with the fastest time. For each thrown part three penalty points are calculated. In another widely used judging procedure, five penalty seconds are added to each thrown part; the fastest player wins.

In the "Hunt for Points" judging process, the various obstacles on the course are worth different points. The aim is to collect as many points as possible in a given time. The number of points for each obstacle is indicated on a board by the right cone. Each obstacle can only be passed twice, regardless of the direction. An obstacle that was started within the permitted time may still be completed, after which the finish line must be crossed directly. One possible strategy is to tackle the most difficult obstacle with the highest score at the end, as this obstacle also takes the most time.

Unofficially also called "marathon". Here, natural and artificial obstacles such as bridges, small streams or narrow and winding paths have to be overcome. The route is divided into 3–5 sections, mostly around 15–18 km. Certain gaits and times (minimum and maximum times) must be observed in the sections. The last section of the route has between five and eight obstacles that must be passed as quickly as possible. Often terrain obstacles such as water crossings have to be mastered. You can gallop in the obstacle course. You drive in sportswear and mostly with a marathon car . The co-driver (groom) stabilizes the carriage in fast bends by shifting weight and often calls out loudly to the driver of the route or the way through the obstacles.

The combined evaluation consists of three sub-tests and results from the results of the dressage test, terrain test and obstacle driving.

In addition to the world championships, the world cup is the most important competition for four-in-hand drivers.

International tournaments that are organized according to the rules set out in the General Regulations of the FEI are called Concours d'Attelage International (CAI).

Also known as traditional driving. During this sociable driving sport, historical teams and appropriately prepared animals are presented to experts and the public. This is followed by an obstacle course with a wide variety of tasks, and the culmination is a drive from the manor through woods and fields. The drivers also dress in elegant costumes that match the year of their team and equip themselves as authentically as possible. The aim is to preserve the historic cars, to breathe new life into them, to promote young people in order to maintain the tradition of historic driving with future generations.

When hiking, long distances are driven by horse and cart, sometimes over several days. Driving associations, for example from the Bavarian Drivers' Association , offer relevant information.

The popular recreational skijoring or sledging, where a rider steers the horse and a skier or sled driver holds on to a pulling rope, like a water skier, is often used as an introduction to driving .

With skijoring, the skier steers the horse himself, with skijoring he is pulled by a ridden horse.