This article deals with the anatomical term; for other meanings, see tail (disambiguation) . 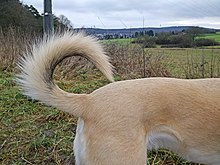 The tail or tail of a domestic dog is primarily used for body language communication. This dog sniffs a scent trail extensively and feels in control of the situation. The high erect tail expresses self-confidence and concentration.

In the vertebrate is a tail ( lat. Cauda ; Greek . Ουρά ) with the muscles , tendons , skin and possibly coat (or scales or feathers held), rear end of the spine at the base of the anus . In some vertebrates it is long and then consists of many vertebrae, often with a high degree of mobility due to muscles (for example the wound and prehensile tails of many primates ), in others it is short and stubby, sometimes wide and flat ( beavers , whales ), in some it is completely absent ( humans , adult frogs ). So-called tail people , in whom a stubby tail is present as an atavism , are very rare.

Cats and dogs use the tail for both balancing and communication .

Originally only in the High German language area valid word mhd. Swanz is a regression from MHG. Swanzen , pivotally movable '. It initially meant 'swaying movement when dancing', then 'train, drag dress' and only then does the meaning 'animal tail' derive.

In anatomy, the terms caudal or caudal for `` concerning the tail '' or `` towards the tail or in the direction of the rear end of the trunk (located) '' are derived from the Latin word cauda (also kaudad or caudad as a pure indication of direction ). The Greek word ουρά ourá can also be found in scientific terms, for example in the medical name brachyuria for a congenital deformity of the tail, and, like cauda , in various scientific names of biological taxa , including Anura , Urochordata and Uroplatus or Caudata , Caudofoveata and Caudipteryx .

The tail of the horse is called the tail, which consists of the tail and long hair.

In the hunter language , there is next to the tail of the beaver special terms for the tail of certain animals, such as flower with hares and rabbits , a rat with foxes and martens , Pürzel in the wild sow , standard in foxes and wolves , Wedel at ungulates except wild boars. Shock refers to the totality of the tail feathers in a bird's tail . In domestic dogs, the tail is called the tail .

In some mammals, scent glands are formed at the base of the tail , such as the vial gland in predators or the caudal gland in guinea pigs .

Injuries to the tail are relatively common in animals. Tail chasing and tail biting are among the obsessive-compulsive disorder.

Tail paralysis occurs as a result of damage to the tail nerves or the spinal cord (→ cauda equina syndrome in dogs ).

The limber tail syndrome is an inflammatory painful disease in domestic dogs, which occurs probably due to overload. In the ring tail of the rats, ring-shaped constrictions and tissue deaths occur.

Hair loss (alopecia) on the tail, known as the rat tail, is a symptom of various diseases. In domestic dogs, this includes hypothyroidism , hyperadrenocorticism and sebadenitis .