Anura is a redirect to this article. For the Malaysian long and triple jumper see Andre Anura .

The frogs (Anura; also: Salientia ) are by far the most species-rich of the three recent orders from the vertebrate class of amphibians . The other orders of the amphibians are the caudate amphibians (Caudata, Urodela) and the sneak amphibians or caecilians (Gymnophiona).

Most frogs are referred to as "frogs" without any closer relationship. Among the anurans also include toads and toads .

The terms frog and toad are systematically not clearly delimited. A “frog” is commonly understood to be a relatively slender, agile frog with rather smooth and moist skin and strong jump legs. Example: the genus Rana ( real frogs ). In contrast, a "toad" is generally considered to be plump and stocky built. Your skin is rather dry and "warty". The comparatively short hind legs are only used for short hops and for walking on all fours. Example: the genus Bufo ( real toads ). In reality, these demarcation features are often blurred and can not be confirmed in the amphibian taxonomy .

Unique are the toads delineate and systematically assigned: A toad is a phylogenetically primitive, less Froschlurch having a flattened body, warty top and brightly-colored (yellow or red) marbled ventral side. Toads form the genus Bombina .

In contrast to the tail amphibians, the frog amphibians only have a tail during the larval phase in the water. With the metamorphosis to the land animal this is receded. Depending on the shape of the hind legs, which are significantly longer than the front extremities, frogs move forward walking, hopping or jumping far. Some are very good at climbing; others dig themselves into the ground or live in the water constantly.

As with all amphibians, the bone structure is partially reduced. Thus, apart from a few species of the suborder Archaeobatrachia , they have no ribs. In contrast to the caudal amphibians, the shoulder girdle of the frog amphibian is ossified and equipped with a collarbone. The hip region is built to be particularly stable and has limbs positioned noticeably far back in order to be suitable for the enormous leverage and pushing effect when jumping.

The skin can be smooth or warty. It is permeated by mucous glands that keep the surface moist and allow the skin to breathe . Many species also have body glands that produce poisonous protective and defensive secretions . Pigment cells are responsible for a variety of coloring and drawing.

The largest species is the rare West African goliath frog ( Conraua goliath ) with an occupied head-trunk length of 33 and an estimated 35 to 40 centimeters . On the other hand, several "miniaturized" species barely reach an inch in size when fully grown, such as the Brazilian saddle toad Brachycephalus didactylus , the Cuban Monte Iberia frog ( Eleutherodactylus iberia ), the Malagasy narrow- mouthed frog Stumpffia pygmaea or the Seychellois vertebrate vertebrae to the world's smallest cochineal frog count at all.

Amplexus in the common frog

Most frogs seek out a body of water to reproduce and lay their spawn there; However, there are also species with direct larval development within the eggs laid on land ( Terrarana ) and at least one viviparous species ( Limnonectes larvaepartus ). The males often have sound bladders to make mating calls. The eggs on the cloaca of the female in the form of lumps, strings or single eggs into the water - but sometimes on leaves above the water or on the forest floor - issued while from the Amplexus externally located males inseminated (see it. Caudates ). After several days, a tadpole developed from the embryo .

At first the gills are on the outside, later they are covered by a fold of skin. After several weeks of larval development, during which the tadpole feeds on plants, organic material, small animals and carrion, and in some poison dart frogs also on species-specific, unfertilized spawn, the animal first has a pair of rear legs. The front legs only become externally visible a few days later.

After mostly several months in the water, the actual metamorphosis to land animals occurs, with the gills receding, among other things. Breathing now takes place through a simply constructed lung and the strongly changing skin. The digestive and nervous system as well as other organs are completely transformed within a short time. Outwardly, the more fish-like shape gives way to the shape of a frog or a toad (for details see tadpole ). At the end of the transformation, the oar tail is gradually reabsorbed .

Depending on the species, it takes a different length of time, usually one to three years, before the animal becomes sexually mature and takes part in the reproductive process itself.

Frogs occur on all continents, with the exception of Antarctica , and many islands from the cold-temperate to the tropical zones. The biogeographical region of the Holarctic is comparatively poor in species; Species diversity focuses in particular on the subtropics and tropics of the New World Neotropics (Central and South America) and Old World Paleotropes (Southeast Asia, Sub-Saharan Africa).

Currently, depending on the overview, 40 to 47 recent families with around 5,800 species are differentiated - the number of species is constantly changing, mainly due to new findings from phylogenetic research on systematics as well as constant new discoveries, especially of tropical frogs, which were previously unknown. The most diverse families are the tree frogs (Hylidae) with around 870 species and the real frogs (Ranidae) with around 850 species.

(Sorting within the same rank alphabetically according to scientific names) 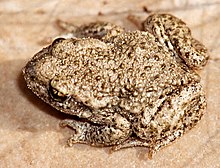 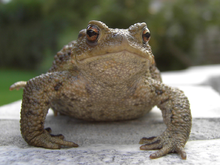 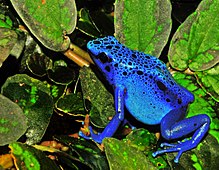 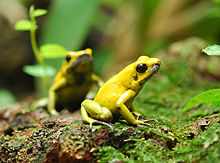 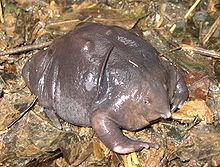 The phylogenetic origin of the frogs and the other modern amphibians ( Lissamphibia ) has not yet been clarified with absolute certainty. Mostly it is assumed that it is to be found in the group of Temnospondyli . Gerobatrachus , a unterpermischer temnospondyli from the family of Amphibamidae , showing a mixture of frog and Schwanzlurchmerkmalen ( " mosaic form ") and could the common ancestor of frog and urodeles closely related. Czatkobatrachus from the Lower Triassic of Poland and Triadobatrachus from Madagascar already show clear frog features. Both are counted among the Salientia , a group of amphibians, to which the modern frogs and original fossil forms belong. Some of the more recent frog families can be traced back to the Jurassic and the Cretaceous on the basis of fossil finds .

Soft PVC can contain phthalate plasticizers , antioxidants , heat stabilizers (support the shaping) such as organotin stabilizers and flame retardants ( e.g. antimony trioxide ) as additives (see Foil pond # polyvinyl chloride (PVC) ). The non-chemically bound plasticizers , which can make up "up to 50% of the total mass", are easily removed from a pond liner and then migrate into the environment. Phthalates , bisphenol A and the organotin compounds they contain are considered to be endocrine (hormonally) effective; substances of this kind influence the reproductive and survival rate of amphibians and even the reputation of frogs "so specifically that all substances are classified according to their mechanisms of action and detected in environmentally relevant concentrations could become." .