The pond frog ( Pelophylax kl. Esculentus , Pelophylax "esculentus" or Rana "esculenta" ), more imprecisely also called the water frog , belongs to the real frog family (Ranidae) within the order of the frogs . In addition, it is reckoned according to appearance, way of life and relationships with the water frogs , which many authors have recently placed in their own genus Pelophylax . Within this difficult to understand taxonomic complex, the pond frog is not a biological species in the classical sense, but a hybridogenic hybrid of the sea ​​frog ( Pelophylax ridibundus ) and the small water frog ( Pelophylax lessonae ). Due to special genetic factors, however, the pond frog can exist and reproduce without backcrossing with the parent species.

The external characteristics of the pond frog are ideally intermediate between those of its parent species, the little water frog and the sea ​​frog . However, depending on the genetic disposition, an individual can either look more like one species or the other. This applies to body size as well as the coloring and drawing of the upper side, abdomen and limbs or, for example, the length of the lower legs in relation to the head-torso length . This mediating position even applies to the heel hump on the rear inner toe. In the pond frog, the heel hump called the callus internus is more raised and larger in relation to the toe length than in the sea frog, but smaller and more asymmetrical than in the small water frog.

Specimens with genetic proximity to the sea frog are up to nine centimeters (males) or eleven centimeters (females) long. In the "normal case" the upper side is colored grass green - but occasionally also brown - and characterized by a light green line along the middle of the back (from the tip of the snout to the cloaca) as well as two clearly protruding back gland ridges. Dark points and spots can also often be seen.

Even the vocalizations mediate between the parents: the mating calls are not as buzzing as with Pelophylax lessonae , but rather more clearly perceptible to the human ear in their individual tone sequences, but less choppy than the "chuckle" of the sea frog. Like all water frogs, the pond frog has two outer sound sacs , which are located in the side corners of the mouth and enable it to make loud calls. With him they are usually whitish-gray in color (with the sea frog darker gray, with the little water frog white). However, the "croaking" calls to the district can not be assigned more precisely to the various taxa .

Two triploid pond frog males from Lower Saxony. The one on the left is very similar to a small water frog, the one on the right just as clearly a sea frog, but both are pond frogs.

A hybrid is usually either sterile or at least not very vital and relies on the recombination of parental genes for reproduction in the next generation . This also takes place in the pond frog, at least if one of the two parent species lives syntopically , i.e. in the same habitat (see also hybridogenesis ). In northern Germany in particular, however, it is more the rule that pond frogs occur in pure hybrid populations - Pelophylax lessonae and P. ridibundus are then absent from the same habitat. Nevertheless, the pond frog can exist and multiply there for a long time. He succeeds in doing this because, in addition to “normal” individuals with a double ( diploid ) set of chromosomes, there are also those with three sets of chromosomes. These animals are called triploid ; they thus carry the complete genetic information of one of the two parent species. They are often particularly vital and therefore play a decisive role in the reproductive process.

Since triploid specimens have “stolen” a set of chromosomes from the parent species, according to a suggestion by herpetologists Dubois & Günther (1982) , the pond frog is not called species , but Klepton (participle neuter to Greek κλέπτω klepto “steal”). This is sometimes marked with the abbreviation "kl." Between the scientific genus and species name - however, this spelling is not adopted by all scientists (alternatively, for example, the species name part is put in quotation marks). This inheritance-biological peculiarity also explains the variability of the external characteristics of the pond frog described above: while diploid specimens are phenotypically exactly between the two parent species, as they each have one set of chromosomes, triploid animals resemble the parent species from which they have two sets of chromosomes. In field biological research, this fact means that triploid pond frogs are sometimes very difficult to distinguish externally from the parent species that is dominant in their genes.

In addition to the genetic characteristics mentioned, the pond frog's genome contains an enormous proportion (77%) of transposable elements . These DNA segments , also known as “jumping genes” , can be responsible for certain mutations ( chromosomal rearrangements ) occurring in the organism and are therefore discussed today as a driving evolutionary force.

Habitat, way of life and distribution

The pond frog is relatively tightly bound to bodies of water all year round, but again not as much as the sea frog: The animals also go on longer shore excursions and overwinter mostly terrestrially (in cavities in the earth, etc.). Perennial (permanently water-bearing), open still waters are preferred as spawning and residential waters, especially ponds and near-natural ponds, where frogs can sunbathe on the edge of the bank or while sitting on water lily leaves and look out for insects. In the case of danger, they jump into the water in the typical water frog fashion with a wide leap and hide in the mud. The mating season is May and especially June - the pond frog is the latest in the spawning calendar of Central European amphibians. For characteristics of spawn and tadpoles, see, for example, small water frog . In addition to insects, the food spectrum also includes other invertebrates (spiders, worms, snails, etc.), but sometimes even smaller amphibians or fish.

The pond frog is distributed from France through Northern Italy and all of Central Europe to the Baltic States , Ukraine and the southwestern edge of Russia . The "species" is naturally absent in the Mediterranean, the British Isles and Scandinavia (with the exception of Denmark and the southern tip of Sweden). In Germany, Austria and Switzerland there is an almost comprehensive distribution; There are larger gaps only in the extreme northwest of Germany (especially in East Frisia ) and in some middle and high mountain areas. Pond frogs are - in general much more common than their parent species - almost everywhere where there are sea frogs or small water frogs, but also in many other "pure" populations.

Pond frogs appear to be less threatened than most other amphibian species because of their adaptability and their relatively stationary way of life. Even in some fish ponds (which should at least have banks covered with reed beds) they can survive better than the other amphibians (with the exception of the common toad ). 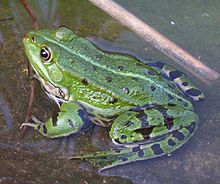 An old term for these animals railings . The dictionary of the Brothers Grimm shows:

"RELING, m. Toad species, marsh or pond frog: a kind of toad that is called railing or möhmlein, sitting and singing in the unclean puddles in spring and summer, is golden yellow or almost red-yellow and with black speckles on the belly, even uncomfortable to look at. Simpl. 1, 384 short. it is spelling for röhling, and the animal gets its name from its own tone, cf. bair. moaning, groaning, grunting, neighing, screaming like a donkey (see groaning); in northern Franconia in rühling swamp or pond frog SCHM.2 2, 85; hessisch roeling water frog and water lizard VILMAR 330. "

The name is completely unusual today, but has been retained in Georg Philipp Telemann's A major violin concerto Die Relinge (TWV 51 / a4).