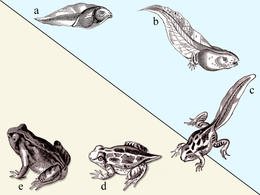 In the older larvae (tadpoles) of the frog the beginning of the metamorphosis is first visible externally with the appearance of the rear pair of legs (b). Then follow u. a. the front pair of legs, the reshaping of the mouth and eyes, the gradual resorption of the tail and the conversion to lung breathing.

Forms of metamorphosis in animals

Classic examples of animal groups with metamorphosis are the frogs (conversion of the aquatic tadpole to the terrestrial form) and the insects (e.g. the conversion of a caterpillar via an insect pupa to a butterfly ). It should be noted that the term metamorphosis does not stand for the entire ontogeny, including the embryonic phase, but generally only refers to the transformation of a larval stage into an adult stage.

Gradual metamorphosis ( hemimetabolism ) is also observed in many insects , with the types epimetabolism, prometabolism , heterometabolism and neometabolism. They do not have a pupal stage, but instead, for example, larvae-specific features of the wing and genital systems are gradually re-formed in the direction of the imaginal final stage, or the external systems develop late, so that wingless larvae and wing-bearing pronymph and nymph stages can be distinguished. The hemimetabolic insects do not go through a caterpillar stage, but the juvenile nymphs grow up and transform themselves into adult animals, whereby they moult several times .

In the case of complete metamorphosis ( holometabolism ), the types homometabolism, remetabolism, parametabolism and allometabolism are differentiated. This form also includes the example of the butterfly with its intermediate pupal stage and the complete reconstruction of the organs that takes place. In the case of holometabolic insects, only the caterpillars that shed their skin several times grow . The adults are fixed to their size by their chitin shell and cannot grow. Regarding the process of complete metamorphosis, it can be said that the creature emerging from the larva is usually a completely new creature. The original larva is initially almost completely dissolved by its own digestive juices and thus dies. This partial self- digestion is called histolysis . Only a few collections of special cells called histioblasts , which did not fulfill any function during the larval stage, are spared from this process and form the basis for the newly emerging organs. How much original tissue is preserved differs from species to species, but in butterflies , for example, it is only a few percent. 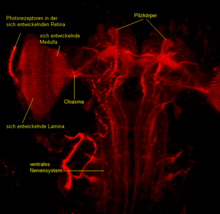 Also from parasitic worms , e.g. B. in liver fluke , complicated transformation processes with several intermediate stages are known. The extensive research on the fruit fly Drosophila melanogaster revealed interesting details about the metamorphosis of the insects.

The concept of metamorphosis in natural philosophy

The idea of ​​metamorphoses was widespread in the sciences of the 18th and 19th centuries, originally this idea came from Johann Wolfgang von Goethe , who was also a natural scientist and, among other things, examined the metamorphosis of plants in search of the original plant . The term was also used by Carl von Linné (1707–1778).