This article explains the adjective adult; for the American electronica band see ADULT. 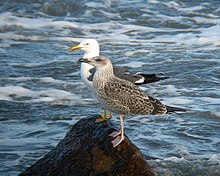 An adult lesser black- backed gull (back) and a non-adult bird of the same species (front). The term “adult” would not be applicable here, as the young bird in the foreground is already fully grown. So it is better to speak of "adult dress" and "youth dress".

The adjective adult (from the Latin adultus for "grown up") is a synonym for adult and describes in particular the phase of life after an organism has reached sexual maturity . Transitional stages are also referred to as subadult or pre-adult (“half-grown”) or immature (“immature”). The term is often used to describe invertebrates that develop through one or more larval stages and to describe birds.

An adult (plural: adult ) is accordingly an animal that has completed the juvenile (child, adolescent, growing) phase. As a rule, this is the last stage of individual development , as animals only rarely reach a comparably old age at which a person could be called "old man".

In the case of insects , the animal that has completed the larval and pupal stage is referred to as adult. The term imago is also often used for insects .

In birds , this term is used to describe individuals whose coloration remains unchanged during the breeding season in subsequent years. Birds with seasonal dimorphism then show in the spring and summer breeding plumage , the rest of year the plumage . Especially with larger birds, for example large birds of prey , the adult plumage is often only reached after several years. Most species of birds are physically mature by the time they leave the nest or fledge. In birds until they reach the adult stage, it is usually not a growth process, but a process of color change, and adult birds are therefore often referred to as "discolored". Sexual maturity is also often, but by no means always, associated with reaching the adult stage.