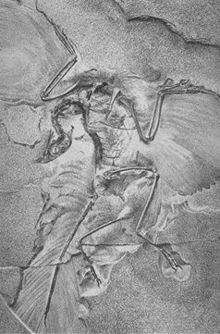 In evolutionary biology, organisms that have the characteristics of two taxa are called mosaic forms (also evolutionary link ) . They are not necessarily directly related to the two taxa, they can also be close relatives of them.

Mosaic forms are therefore also referred to as intermediate forms or transitional forms . However, these are organisms that combine characteristics of older biological groups and younger biological groups. From an evolutionary point of view, they stand between the two taxa.

“ Missing Link ” describes a hypothetical mosaic shape, ie a link between two taxa that has not yet been found. In English this designation is retained even after the find, in German it is then changed to "mosaic form" or in the sense of an interpretation to "transitional form". The terms "connecting link", bridge shape or bridging animal are also synonymous.

While the term “mosaic form” only describes that an organism has characteristics of different taxa, “transitional form” interprets the associated organism in its phylogenetic development .

Animal species living today that have the characteristics of an ancient taxon from which younger taxa developed are referred to as " living fossils ".

Meaning of the mosaic shapes

The mosaic forms discovered as fossils - the best-known example is the primeval bird Archeopteryx - are therefore important observations predicted by evolutionary theory with regard to the development of taxa, because they show that, for example, two taxa as different as crocodiles and birds are related to one another (both are archosaurs ). Mosaic forms were normal, functional living beings during their lifetime, their role as a link only arises from the fact that today's higher taxa, between which they stand, can be easily separated and no transitional form has survived to this day. The “mosaic” therefore only emerges from a retrospective examination of the fossil record from today's perspective.

Panderichthys lived about 360 to 370 million years ago and is described as a primeval coelacanth in which the bones of the anterior pectoral fins were largely converted into legs, while the posterior pelvic fins still looked largely fish-like. His greatly enlarged breathing holes are also interpreted in the sense of a transitional form, as a link between the gills of the fish and the auditory canals of the terrestrial vertebrates .

The discovery of the fossil Tiktaalik roseae has shed light on the order in which bony fish developed characteristics of terrestrial vertebrates (tetrapods). Panderichthys -like fish are considered ancestors of Tiktaalik .

The almost three-foot tall Ichthyostega , which lived about 400 million years ago, is also a link between fish and amphibians. Presumably, this animal - as the first tetrapod - made the transition from water to land, not like the typical coelacanth with only bone-reinforced fins equipped, but with proper limbs that made it possible for him to wander around the country. Remains of the approximately 1.5 meter long Ichthyostega have been found in Greenland.

Ichthyostega's legs were very splayed and still suitable as a paddle for swimming. They couldn't bear any heavier body weight.

Gerobatrachus hottoni lived in the early Permian around 290 million years ago. Its appearance suggests that this animal may have been a common ancestor of frog amphibians and tail amphibians. Above all, skulls, vertebrae and teeth have a mixture of frog and salamander properties.

Live reconstruction from Seymouria . The animal was about two feet long.

The genus Seymouria belonging to the reptiliomorpha from the early Permian of North America and Europe is considered a mosaic form with amphibian and reptile features and is thus at the transition to the fully terrestrial way of life of the amniotes .

The transition between " reptiles " and mammals has also been a mystery for a long time. This was partly because it was assumed that the mammals developed from the reptiles at the beginning of the Mesozoic Era , the end of the Triassic . Today we know that mammals are much older and have survived in their shadows alongside dinosaurs . The following groups belong to a number of mosaic forms that are between reptiles and mammals:

A particularly interesting phenomenon in mammalian development is the development of the inner ear through a complex transformation of some jawbones.

Cynognathus can be seen as the link between the primitive therapsids and the mammals . Cynognathus had a lizard-like body and tail, but the skull anatomy already shows some mammalian-like features. The Therapsids were therefore also called "mammalian-like reptiles".

Heteronectes chaneti occupies a mediating position between the bilaterally symmetrical fish and the flatfish : One eye of the animal is in the lateral position that is usual for fish, the other eye on the opposite side of the head is far above the usual position, immediately next to the middle of the back.

The platypus shows features of reptiles and mammals as well as individual bird-like features.

The males have poison glands that are similar in some features to those of (some) reptiles, but which have developed independently.

Platypuses (like all monotones ) not only share some external features with birds , but also resemble them in some features of the chromosome set. In contrast to these and all other mammals, their sex is determined by five X and five Y chromosomes (in males) or ten X chromosomes (in females). There are some indications that the X / Y sex differentiation in the monastery on the one hand and the sac and placenta on the other hand developed independently of each other. There is now consensus that monotremes are not ancestors of the other modern mammals, but an independent early sideline of mammals.

The link between reptiles and birds has long been a missing link. Today the Archeopteryx is probably the best-known form of mosaic. It shows features of birds and reptiles.

The modern birds gradually emerge from the dinosaurs through a long series of familiar mosaic shapes. Below (in ascending order):

So far, twelve specimens of Archeopteryx and a feather have been found in the limestone (the slab of limestone ) from quarries near Eichstätt and Solnhofen (Bavaria) since the end of the 19th century . Despite the partly very well-preserved finds, which allow a good insight into the evolution of birds, the experts argue about whether the magpie-sized Archeopteryx could fly properly or only glide down from trees because the shoulder girdle and sternum were not connected, which is because of the Exposure in birds is necessary. The horn ring around the eyes and the finger-like claws on the wings are striking; in today's birds, all limbs are included in the wings. The feathers developed from the scales of the ancestors.