Apomorphy (from ancient Greek από apo "from, away" and μορφή morphē "form, shape") is a fundamental concept of cladistics (method of biological systematics ). It contains a newly acquired (“progressive”, “derived” ) characteristic in the course of the phylogenesis of a taxon . The corresponding adjective for such a feature is apomorphic . In contrast, there is plesiomorphism , the original (“primitive”) feature. All of these concepts and names go back to the German entomologist and founder of cladistics Willi Hennig . 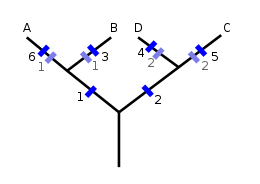 The concept of apomorphism is relative to a similar extent, because the autapomorphy at the base of a clade has the character of a (sym-) plesiomorphism within the less inclusive clades it contains, i.e. H. the hairs, which are autapomorphic at the base of the mammals, are (sym-) plesiomorphic in the subgroups of the Theria. This also means that symplesiomorphies are also homologous, although they do not go back to the most recent common ancestor.

*In cladistics, a distinction is sometimes made between species and monophyletic taxa on the basis of the concept of the (inevitably paraphyletic ) parent species.

Note that higher ranking taxa in particular are often named after their apomorphism or one of their most striking apomorphisms.