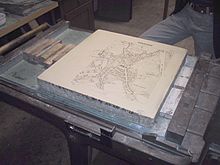 Application of the stone for lithography 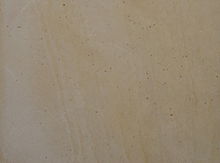 Floor covering in the Rosenspitz laying pattern made from Solnhofen limestone

Solnhofener Plattenkalk , also Solnhofen limestone or lithograph slate , is the name for a natural stone from the Altmühljura of the Franconian Alb in Bavaria, which is colloquially often inaccurately referred to as Solnhofer Platten and in trade for short as Solnhofen . The Solnhofen subformation , a lithostratigraphic sub-unit of the White Jurassic , is largely made up of Solnhofen limestone.

Solnhofen limestone occurs in the region around Solnhofen and Langenaltheim in the Weißenburg-Gunzenhausen district , in the west of Eichstätt as well as Mörnsheim , Blumenberg , Schernfeld , Rupertsbuch and Wintershof in the Eichstätt district in numerous quarries in Middle Franconia and Upper Bavaria . It was created by layers of deposits in lagoons that were periodically flooded with fresh water by the sea during the Upper Jurassic . In these lagoons, the salt content was significantly higher, which prevented animals and plants from decaying, and details were preserved as fossils.

As early as the 2nd century, the Romans used this limestone as floor slabs for a cold water basin in a villa in Theilenhofen , a town near Weißenburg in Bavaria . In the 9th century Solnhofen limestone slabs were laid in the Sola basilica in Solnhofen. In 1423 the limestone was mined in a quarry on Solaberg. In 1596 there was the first permit to mine Solnhofen slabs, and the first quarries were opened in the Eichstätt area. In 1674, Prince-Bishop Marquard Schenck von Castell issued the first quarry regulations, as quarrying increased steadily and required inspection. However, there is no evidence whatsoever for the frequently cited example that in the 15th century the floor of the Hagia Sophia church in Istanbul was covered with Solnhofer floor slabs.

Sales of Solnhofen limestone increased considerably in 1796 due to the invention of lithography by Alois Senefelder (since then the limestone has also been known as "lithograph slate " or "lithographic lime"), and in 1857, as a result of the economic boom, the " Solenhofer Aktien-Verein ”, which exported the lithography stones worldwide.

In 1828 the Eichstätt master glazier Johann Weitenhiller invented the so-called pinch pockets . These were roof tiles extracted from the quarry, which were broken into the approximate shape of the so-called beaver tails with the nippers developed by Weitenhiller . A hole was then drilled into the stone slabs, which were less than 2 cm thick, on the upper side, which was used to attach to the roof battens with a nail. With this invention, quarries became economical again at that time, in which only thin slabs could be extracted.

Sales of Solnhofen limestone slumped in 1909, and due to a cut in wages, there was a strike by 900 to 1200 workers in the stone industry who were organized in a Christian union. In 1913, the offset process prevailed over lithography, and sales fell, and the export business also came to a standstill in the later onset of the First World War .

After the end of the First World War , only a small number of lithographic stones were broken, but wall and floor panels were made instead. Nevertheless, it was not possible to build on the economic period before the First World War, and the Great Depression of 1929 was accompanied by a further decline in sales. When the National Socialists came to power in 1933, there was an improvement in the order and employment situation, because for nationalistic reasons they preferred the use of local rock deposits and thus also the Solnhofen slabs for representative buildings. But after the beginning of the Second World War , the use of natural stone came to a standstill. But as early as 1946, the Solnhofen limestone slabs were able to register an upswing in demand, which can be explained by the lack of raw materials and the considerable pent-up demand caused by the destruction of the Second World War. However, after ceramic tiles competed with Solnhofen limestone tiles in the 1950s, domestic sales declined. The Solnhof companies reacted from 1970 by intensifying their export business. In recent times, the collapse of the Eastern Bloc and the opening of the world market for Chinese natural stones have created strong competition for Solnhofen limestone.

In addition to the Solnhofen limestone, three other limestones are quarried along the Altmühl in the southern Franconian Jura, all of which have been used as stone in architecture for a long time : the Wachenzeller dolomite , the Jura marble and the Kelheim limestone .

It is a dense, cream-colored to ocher-yellow limestone, which has been separated in platy form and appears brownish, greyish and, more rarely, reddish in places. On the layer surfaces there are sometimes dendrites that are either made of iron or manganese oxides and can look like ferns or trees.

The Solnhofen limestone slabs are extracted in quarries . The way of working has remained unchanged for centuries due to the layered rock that does not allow the use of machines. The chopping masters break the stone out of the quarry with pickaxes and receive a package that contains several layered slabs. These are split with a hammer and chisel and transported to the factory on pallets. There they are either processed further or they are sold in the raw state as panels with a rough surface.

Solnhofen quarry in May 2004 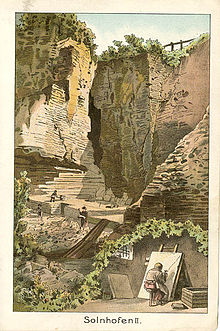 Preparation of the raw slabs in the quarry

Most of the Solnhofen slabs have been used for centuries and worldwide for floor and stair coverings, wall tiles or for historical tombs, especially epitaphs in historical buildings, as well as regionally and historically as the lime slab roof on the so-called Jura house .

In the 19th century in the Dachau region, the Dachau house plaques were both a house decoration and a symbol of protection. The Solnhof limestone panels show religious motifs that were carved and painted as a bas-relief in the stone slabs.

Although it is a soft stone with a hardness of 3 to 3.5 on the Mohs scale , it is one of the densest limestones on the market. It is well suited for interior work. It is often used with a cracked, finely sanded, matt polished as well as broken-rough sanded or brushed (satin) surface. A real polish can be created with the help of oxalic acid or clover salt . Calcium oxalates , which reflect the light, are formed on the surface of the natural stone .

In the past, hand-cut panels with a thickness of 12 to about 22 millimeters were used for wall and floor coverings; today the panels are either calibrated to a uniform thickness between 7 and 18 millimeters or offered in assortments of either 7–9 mm, 9–12 mm or 13–30 mm thickness. The maximum thickness of the panels available is 30 centimeters and the maximum length is 2 meters. Solnhofen limestone is particularly suitable for installation over underfloor heating.

Its weathering resistance is inadequate, because it tends to be partially dissolved, roughened up to flaking and chipping when it is built outside. It is therefore not suitable for use as an external facade.

The imperial grave of Heinrich II. And Kunigunde in Bamberg Cathedral and the tomb of Aloisius Senefelder consist of Solnhof limestone. In the 16th and 17th centuries, Solnhofen stone was a popular material for small-format reliefs among artists. 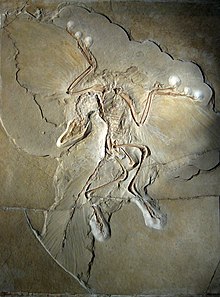 With a gap associated dendrites on a layer surface

The Solnhofen limestone limestone is one of the most important fossil deposits . All previously known specimens of the Archeopteryx , a feathered dinosaur known as the "primeval bird" , were found here. These fossils made the Solnhofen limestone internationally known, also because of the often preserved details (soft parts, plant parts, dragonfly wings, feathers, etc.). Important museums in Eichstätt are the Jura Museum on Willibaldsburg and the Bergér Museum in Eichstätt-Harthof, as well as the Mayor Müller Museum in Solnhofen and the Fossil and Stone Printing Museum in Gunzenhausen . Another collection is in the Museum of Mineralogy and Geology Dresden .

Even amateur paleontologists can, in specially designated quarries, participate in the fossil hunting. Fossils found yourself can usually be kept.

Dendrites , branched dark brown to black structures that are reminiscent of plants on the outside, are quite common in the slab of limestone . Such formations can be mistaken for fossils ( pseudofossils ), but it is iron and manganese compounds that are crystallized from solutions on layer surfaces . Dendrites therefore have a chemical-mineralogical origin and arise through diffusion processes .

The Solnhofener Plattenkalke fossil site has been designated by the Bavarian State Office for the Environment as geotope 577A008 and in 2002 was awarded the official seal of approval " Bavaria's most beautiful geotopes ". See also the list of geotopes in the Weißenburg-Gunzenhausen district .

In 2006 it was included in the list of 77 awarded national geotopes in Germany.

The installation is carried out in accordance with DIN 18352, DIN EN 1469, EN 12057 and EN 12058 via hot water and electric floor heating. Furthermore, the Industrievereinigung Altmühltaler Kalksteine ​​e. V. laying instructions.