A lime slab roof (also slate roof ) is a type of natural stone roof covering for so-called Jura houses in the region around the Altmühltal in Bavaria.

The slabs, which are usually found in the uppermost layer of the White Jura immediately after the humus layer has been removed, with a thickness of up to 50 meters, can be relatively easily broken out by hand using the leverage of the pick and splitting using "clipping tools" ( hammer and chisel ) win. The thickness of the yellowish-white to bluish-gray limestone plates is 5 to 15 millimeters. Only the so-called core plates are considered useful; they can be recognized by their bright sound and firmly closed fracture surface. The rubble or overburden in the quarry is at least 60 percent, which is piled up to form rubble heaps (“heaps drop”) and partly used to refill exploited quarries .

The core panels are weatherproof, waterproof and frost-proof . They were used without further processing in the irregular shape as they came out of the quarry, or they were trimmed with nippers to create stencil slate , also known as pinch pockets . These came in the form of flat bricks in five different sizes; In addition, more flat base plates, the so-called balleisen, were required for pinch- pocket roofs , which were manufactured in four sizes, ie tweaked.

Old limestone roof on the Hefelemühle in Solnhofen in the Altmühltal 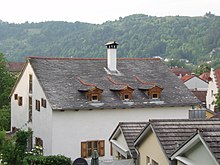 The geological occurrence of the slab of limestone in the Altmühltal region has been used to cover roofs for centuries, demonstrably since the Gothic period . Because of the heavy weight of the slabs, the use of leg slate was limited to the region where it was found, roughly the area between Kelheim in the southeast and Treuchtlingen in the northwest.

Since slabs placed on top of one another slide off at an angle of inclination of 36 to 39 degrees, the roof trusses had to have a lower inclination angle, usually 28 to 30 degrees. However, there are also examples of pitched roofs covered with slate. The layers were laid in four to six layers up to a total thickness of 8 to 10 centimeters. Because of the not inconsiderable weight of the roof, approx. 250 to 275 kilograms per square meter, stably constructed roof trusses, ie well connected but not necessarily thicker, and because of the lower roof pitch compared to tiled roofs, even shorter and therefore cheaper beams were required. The gable roof was used almost exclusively as the roof shape and the hipped roof only occasionally ; Dormer windows with flat or gable roofs to light the attic were possible and were also covered with lime slabs. (Half-timbered) knee sticks could be up to 80 centimeters high in order to provide enough statics for the limestone roof.

The roof was covered from the eaves on wooden gratings, the so-called Harnickel formwork, made of split wooden poles nailed to the rafters . The sparingly installed chimney penetrations were sealed with deflector plates. No further perforations in the roof cladding were made due to the difficulty of sealing. Hollow bricks or, later on, glazed earthenware pipes halved lengthways were used to cover the ridge , or the ridge layers with overhangs on the leeward sides were sealed with mortar . The roofs were mainly in the arid Alb plateau and the service water by rainwater wooden in a network of first, more recently sheet gutters and pipes cisterns was forwarded.

At the turn of the 19th and 20th centuries, the pinch pocket roof emerged as an alternative to steeper roofs . The covering by means of the irregular broken slabs is therefore the more original and more widespread type of slate roof. The pinch pockets , together with the necessary pliers, an invention of the Eichstätter glazier Joseph Weitenhiller (* 1786 in Klagenfurt, Carinthia; † January 7, 1862 in Eichstätt), which he had protected in 1828, were drilled about three centimeters from the edge in order to keep them with To be able to attach nails to roof battens. The holes were made with simple hand drills or foot-operated flywheel drills. Pinch pockets were used like roof tiles; the weight and the manufacturing costs of the pinch pocket roofs also roughly corresponded to those of the tile roofs. Further inventions of Joseph Weitenhiller are wire clips and a process for coloring bricks and bricks. (Main State Archives Stuttgart, inventions E 143 Bü 2684 running until 1858 and E 143 Bü 15576 running until 1847)

Both types of roofing - like the heaps - took on a gray to gray-black color over time; Lichen and moss gave the roofs a special patina after years . As a rule, no repairs have to be carried out on a limestone roof for at least 50 years; then the roof was covered or additional layers were laid on leaky spots, so that historical roofs have 15 to 20 layers in places and their basic structure can be several centuries old.

The longest slate Jura roof in the Altmühltal is said to be on Eggersberg Castle . Except for the roofs of buildings (houses, stables, barns, sacristies and other additions to churches, chapels and ossuary ), the limestone slabs were used to cover enclosures , fire walls , pillars and the like.

Aesthetics of the limestone roof

“In the good blending of the limestone roof with the sky and the peculiar geological structure of the Jura landscape , the particular beauty of the roof covering lies in the landscape; the individual buildings appear almost like a part of the multifaceted Jura formations, as the color, shape and even the layering of the roof has literally grown together with its surroundings and does not intrude anywhere. Even where the roofs join groups in the settlements, they animate the picture without disturbing it; Like the fields of the Jura, the little houses lie huddled together, safely protected under their protective roof covering [...] an atmospheric unity of nature and human work. ”Quoted from: Heinrich Ullmann, Das Legschieferdach im Altmühltal, page 4.

Despite the generally perceived beauty of a lime slab roof, new roofs are rarely covered with lime slabs today, because on the one hand the roof trusses have to be correspondingly more complex and on the other hand the time-consuming and therefore more costly type of roofing with slate is only managed by a few roofers . In addition, there are now concrete bricks with a "leg slate look". Since public funding programs for lime slab roofs have been launched, slate roofs are increasingly being used again , especially in the context of stylish restorations of Jura houses . The Jurahaus-Verein e. V. in Eichstätt, which also operates a housing exchange for Jura houses with slate roofs that are worthy of protection.