This article covers the pliers tool . For further terms with the name "pliers" see pliers (disambiguation)

Use of an electric side cutter

A pair of pliers (from the Old High German zanga : 'pliers', 'bitchess'; related to the Greek dáknein = 'bite') is a two-legged tool in which the active points ( gripping jaws , cutting edges , etc.) act in opposite directions on the workpiece, fixing or processing. In contrast to scissors, however, these do not slide past each other.

Pliers usually consist of three areas: handles, joints , technically referred to as trade and pliers head (with the points of action). Such joint pliers work according to the lever principle : Two bilateral levers are connected to one another by a joint. As a rule, the handles form the longer lever arms (= force arm), the shorter lever arms (= load arm) form the pliers head. According to the law of levers, the manual force applied to the handles is converted to shorten the path and transferred to a workpiece by means of the pliers head. The force in the jaws, which perform a grip-like movement when the legs are pressed together, increases with the transmission ratio. In the case of pliers with which large forces are to be generated, the distance from the center of the pivot pin to the handle must therefore be large and the distance from the center of the pivot pin to the gripping jaws or cutting edges must be as small as possible.

Different from the basic type of pliers, there are special shapes, some of which are also widely used, such as the grip pliers based on the toggle-lever principle .

The oldest pliers were probably used to grip and move hot objects (coal, crucibles , forgings, etc.) and, like the oldest (Egyptian) type of pliers, were probably constructed on the principle of tweezers . Joint pliers have been known since ancient Greece. The earliest known depictions include Greek vase paintings showing tongs as an attribute of the Greek god of smith and fire, Hephaestus . 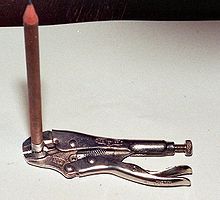 In contrast to other hand tools, pliers are not designed for a specific task (such as hammers , drills , screwdrivers , saws , etc.). Their variety is therefore almost unlimited.

According to ISO 5743, pliers with cutting edges should have a hardness of at least 55 HRC on the cutting edge , and at least 42 HRC on the gripping surface of the pliers head. In addition, they should bear the manufacturer's brand or the supplier's name.

Classification according to purpose

Basic types of pliers are:

Multi-function tools often have pliers as a central element

Depending on the application and quality of the pliers, a distinction is made between several types:

Push-through joints are difficult to manufacture, but guidance in the joint is still given if the joint pin has greater play due to wear. Thrust trades are therefore mostly for fine mechanical precision pliers, especially side cutters, but also z. B. used for water pump pliers and other adjustable pliers.

There are numerous types of handles that pliers are equipped with:

Eyelets on handles are used for fall protection, for example when working at great heights.

The most common types of pliers include:

Pliers for cutting through materials

A special type are forceps for medical purposes. They are also available in a wide variety of shapes. As a rule, they are made of low-corrosion steel (to reduce corrosion during sterilization ). Examples are swab forceps and umbilical cord forceps . Furthermore, there are so-called extraction forceps in dental surgery , which in their current form go back to John Tomes (1815–1895). There are different pliers for the different positions, types and sizes of teeth. In obstetrics serve forceps for vaginal surgical termination of birth .

Pliers for household use

Housekeeping pliers are mainly found in kitchen tools , cutlery and service cutlery . Examples of such pliers are:

Tong-like devices are certain forms of the nutcracker and the tea-egg spoon.

ISO standards for pliers for trade and industry