Areas on the lathe tool , which is also used as a reference in all standards. There is a cutting wedge between the main and secondary flank faces and the rake face. 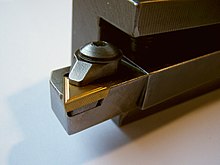 The cutting part is that part of a cutting tool that is effective during machining and on which the cutting wedges are located. The most important terms for its surfaces, cutting edges, reference systems and angles are standardized in DIN 6581.

These surfaces form different angles with one another and with the cutting and feed directions. In order to be able to describe them clearly, two important reference systems, which consist of several levels, have been defined and standardized. In the tool reference system, all planes are based on the vector of the cutting speed , whereas in the active reference system they are based on the active speed . It is the resultant of the cutting speed and the feed rate . The effective speed is actually important for the description of the machining processes, but its exact orientation in space and its amount are difficult to determine. However, since it differs only insignificantly in amount and direction from the easily determined cutting speed, the tool reference system based on it is usually selected.

Surfaces and cutting edges on the turning tool.

The rake face (index after the rake angle ) is the face over which the chip slides. Their position and orientation in space as well as their surface properties therefore essentially determine the chip formation and the power requirement. If it is chamfered , the part of the rake face that lies on the cutting edge is called the rake face. Its width has the formula symbol .

The free area is the area that faces the newly created workpiece area. It therefore depends on the kinematics (movement relative to the workpiece) with which a tool is used to decide which area is the free area. It is always inclined away from the workpiece to avoid friction. A distinction is made between two open spaces:

If the open spaces are chamfered, their width is denoted by and .

The rake face, main and secondary flank form a wedge, the so-called cutting wedge. Its tip is called the cutting corner. 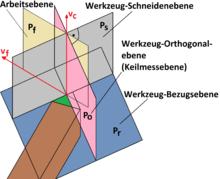 Reference planes on the cutting part.

To define the different angles, two different reference systems were defined and standardized, which consist of clearly defined planes. The tool reference system is important for tool manufacture and maintenance. Its reference plane is perpendicular to the cutting speed. The knitting reference system, on the other hand, is based on the knitting speed, which is important for chip formation . Both systems are thus rotated against each other by the angle of effective direction. Since it is very small in most processes, the angles in both systems are also very similar. Formula symbols in the effective reference system are given the index “e” (from “effective”), those in the tool reference system do not have a special index. Both systems consider an (arbitrary) point on the cutting edge. If a point is selected on the secondary cutting edge, all designations are given an apostrophe (') as an addition in analogy to the secondary clearance area .

Angle in the tool orthogonal plane.

Cutting geometry of a milling cutter.

The clearance angle , the wedge angle and the rake angle lie in the tool orthogonal plane . It applies . The rake angle can also be negative.

The clearance angle is measured between the cutting plane and the flank. Large clearance angles (between 6 ° and 15 °) reduce the friction between workpiece and tool and are mainly used for materials that tend to stick and for tools made of tough hard metals such as P40, M40 or K40. Large clearance angles also worsen the heat dissipation from the tool and, with otherwise the same conditions, result in larger wear mark widths . They also weaken the size of the wedge angle and therefore lead to greater wear .

Small clearance angles (2 ° to 5 °) enable a more stable cutting wedge and thus reduce tool wear and vibration . Vibrations can lead to rattling . However, small clearance angles also increase the friction between the tool and the workpiece. They are used for materials with a strength of over 700 N / mm 2 .

The wedge angle is measured between the flank face and the rake face. It should be large for hard and brittle materials and small for soft, tough materials. A rather large wedge angle is also chosen for roughing . It is usually set first. For tools made of high-speed steel (HSS) or carbide , it takes values ​​between 60 ° and 120 °.

The rake angle is measured between the rake face and the tool reference plane. It can also be negative. Large positive rake angles (+ 6 ° to + 25 °) reduce the cutting force, improve the chip flow, reduce the friction between chip and tool, reduce chip compression , improve the surface and reduce the drive power required for the machines. However, the chips tend to form continuous chips and thus to long chips that can get tangled in the machine. Negative rake angles are mainly used for machining hard, brittle materials, as well as for roughing and scraping .

Angle in the tool reference plane using the example of turning.

The tool setting angle ( Kappa ) and the corner angle are located in the tool reference plane .

The tool setting angle lies between the working plane and the tool cutting edge plane . It determines the position of the main cutting edge to the workpiece, and determines at a given depth of cut the cutting width . The smaller the setting angle, the larger the chip width and the longer the area of ​​the main cutting edge that is in contact with otherwise the same chip cross-section . Therefore, the cutting force is distributed over a greater length and the cutting edge is subject to a lower line load, which leads to less wear . In addition, a small setting angle reduces the required feed force and power. On the other hand, it increases the passive force , so that large setting angles are used, especially with unstable workpieces. With a value of the passive force disappears completely. Values ​​between 35 ° and 100 ° are used. Too small a setting angle can also have a negative effect on the cutting edge and cause severe chatter marks. For roughing it should be> 25 ° and <90 °; for finishing turning, an angle of 90 to 97 ° is preferable because of corner machining.

The corner angle lies between the main cutting edge and the secondary cutting edge . It determines the stability of the cutting edge and should be chosen as large as possible. Small corner angles (around 50 °) are used for finishing and copy turning, since the tool is only lightly stressed here. Usually it is 90 °. Particularly large corner angles of around 130 ° are used for heavy roughing. When turning, radii in common sizes between 0.2 mm and 2 mm are ground onto the turning tools, with high-speed steel (HSS) often individually by hand. The larger the radius, the higher the surface quality.