In manufacturing technology, chip formation is understood as the formation of chips during the machining of workpieces. The cutting wedge on the cutting tool initially upsets the material, which increases the compressive stresses . Elastic and plastic deformations occur , which also lead to shear stresses . After the shear strength has been exceeded, the material begins to detach itself from the workpiece and runs over the rake face of the tool. Due to the high temperatures of several hundred ° C and the multiaxial stress state , materials that are hard and brittle at room temperature are often ductile .

The shear plane model is a greatly simplified representation of the processes involved in chip formation. It is based on the so-called free orthogonal cut, in which the chip formation can be imagined as proceeding in one plane. The tool setting angle is 90 ° (orthogonal) and only the main cutting edge is engaged (free). These prerequisites are given, for example, when turning a pipe longitudinally , provided the tool is wider than the wall thickness of the pipe. The chip formation then takes place in a plane that is perpendicular to the cutting edge. In this model, the material is sheared off in the so-called shear plane, which forms the shear angle with the tool cutting edge plane . The structure in the material changes because it is stretched in one direction and compressed in another. This creates structure lines in the structure of the chip. The angle between these deformed lines and the shear plane is called the structure angle . The angle between the structure lines and the rake face as the flow angle . 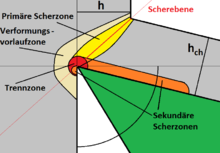 The actual conditions differ in part because of the simplifications of the shear plane model. The shear actually takes place in a spatially extensive area, the shear zone. Chip formation is usually a continuous process. In the case of brittle materials such as cast iron , however, the breaking stress can already be exceeded in the shear zone , so that the material is separated here and the chip formation process begins again. If the deformability of the material is sufficient, which is the case with steels and most metals , then it deforms plastically and changes into the chip. The material is then only cut directly in front of the cutting edge. There are high tensile and compressive stresses on the underside of the chip or on the top of the rake face. The underside of the chip is therefore subject to high deformations, which are noticeable in the secondary flow zone on the underside of the chip. The temperatures here are very high, which in the case of industrial machining of steel can be over 1000 ° C, as well as very high stresses, which are on average 250-350 N / mm². The shear strain in this area is between 0.8 and 4. In the tensile test to determine the strength values, however, they are only about 0.2. The shear strain rate during machining is around 10,000 1 / s, while in the tensile test it is around 0.001 1 / s.

At low and medium cutting speeds, a built- up edge can also develop . A part of the underside of the chip remains stuck to the cutting edge and now functions as a cutting edge until it is torn away by the material flowing in.

Chip formation during grinding differs from chip formation during turning, drilling or milling because of the much smaller chip thicknesses. When grinding, the individual grains that act as cutting edges are usually bound in grinding wheels or stones that are moved over the material. The exact shape of the grains is not known, but usually negative rake angles are effective. Because of the very small chip thicknesses, elastic deformations can no longer be neglected. After making contact, a single grain initially glides over the material without penetrating into it. The grain is then moved further and further in the direction of the workpiece, which, however, yields elastically. When the grain has finally penetrated the material, the chip removal does not take place immediately. First, the material is displaced laterally by the grain through plastic flow, which is known as plowing. If several neighboring or successive grains push the material further and further to the side and deform it further, this can also lead to the separation of material. If the individual grain has penetrated even deeper into the material, chip formation eventually occurs, which is accompanied by further elastic and plastic deformations. Shortly before the grain leaves the material again, the plastic deformations end, while the elastic deformations are retained until contact is lost.

The chip formation process is thus similar to machining with geometrically defined cutting edges. The most important differences are that during machining, the material is displaced laterally by the cutting edge and that the stress state is three-axis and not two-axis.

During lapping , the cutting edges are formed by loose grains that are located in a liquid between the workpiece surface and the lapping tool; the latter presses the grains onto the surface and moves over it. There are several possible removal mechanisms. Grains rolling off between the lapping disk and the workpiece penetrate the workpiece surface with their edges and tips and plastically displace the material, similar to grinding. The subsequent grains increase the degree of deformation of the surface, so that it solidifies until individual spots flake off. The lapping grains can also get caught and thereby penetrate the material and thus remove real chips. When machining hard, brittle materials, microcracks develop, which spread and enlarge until parts of the surface are separated.

Chip formation in high-speed machining has some special features. The cutting force decreases with increasing cutting speed for all ductile metallic materials such as steel and aluminum . The shear angle becomes larger, which leads to less chip upsetting. When dry machining steel (Ck45N) with a cutting width of 0.6 mm and a feed rate of 0.2 mm, the shear angle increases up to about 1000 m / min. Then it remains approximately constant. The chip itself has a clear segmentation. The plastic deformations are concentrated in certain areas; however, the details depend heavily on the material. The exact relationships and causes for this have not yet been conclusively clarified. Presumably, an adiabatic drop in yield strength caused by the high speeds is responsible for the larger shear angle. Changes in the coefficient of friction and the segmented chip are probably not the cause of other changes.

Segmented chips occur with sufficiently strong materials, with titanium already at relatively low cutting speeds. Steels of high strength only show the effect at higher speeds, with particularly soft steels there is no segment chip formation. It is created by alternating upsetting and shearing of the material, which happens in parallel with conventional machining. First, the material is upset. The further the cutting edge moves towards the workpiece, the higher the stresses generated. When the shear strength is exceeded, part of the material shears off laterally. This reduces the compression again so that the compression must be repeated.

From Hartzerspanen one speaks in the processing of materials with a hardness of at least 47  HRC if this method be used for the machining with geometrically defined cutting edge count. These materials are usually brittle under normal conditions (pressure, temperature). Nevertheless, ductile material behavior can be observed during hard machining. Already v. However, Karman noticed that even marble can be plastically deformed if the compressive stresses that occur are large enough. An explanation for this is provided by the theory of hydrostatic pressure. It must be taken into account that in practice only very small chip thicknesses occur during hard machining. The chip formation therefore takes place completely in the area of ​​the cutting edge rounding or the bevel. Thus, strongly negative rake angles act effectively, which lead to high compressive stresses acting on the material in a larger zone.

Several mechanisms and strength values ​​can be used for the failure of the material. If the material is charged in only two axes on train, it comes on exceeding the tensile strength to the brittle fracture . If, on the other hand, the material is subjected to pressure in two axes, plastic flow occurs when the shear flow limit is exceeded .

Several methods have been established for examining chip formation. When the cut is interrupted, the machining process is abruptly interrupted so that a chip root remains on the workpiece, which can be analyzed under the microscope. Micro- cinematography uses high-speed cameras to film chip formation. In addition, simulations can be created with the FEM method.

With micro-kinematography - in contrast to interrupted cutting - chip formation can also be observed over time. It is also suitable for very small chip thicknesses, which are typical in micro-cutting . On the other hand, the cutting speeds have to be relatively low in order to still be able to observe the process. They are of the order of one m / min. Another disadvantage is that only the chip formation on the surface of the sample is observed and not that in the center.

A sample to be machined is ground, polished and etched and the prepared side is pressed onto a quartz glass pane. This is inserted into the machine's chuck. On the other side of the pane is the camera and, if necessary, equipment for lighting and microscopes. Because of the etched surface, the structure of the workpiece and its deformation can be clearly seen. In addition, a grid can be applied to the surface, which is also distorted during the deformation and thus makes the deformation visible. This method is called visioplasticity .

The process goes back to the beginnings of machining research. Kurrein used this method as early as 1905. It was followed by H. Klopstock in 1923, Friedrich Schwerd in 1936 and ME Merchant in 1945, who improved the process. Further work comes from C. Spaans (1971) and G. Warnecke (1974).

When the cut is interrupted, the tool or workpiece is moved very quickly away from the effective point in order to abruptly interrupt the formation of chips. The resulting chip root can then be analyzed under the microscope. It then shows the condition of the material at a specific point in time during processing. The timing can therefore not be examined. The process is also suitable for high cutting speeds and by grinding the chip root, the conditions in the center of the chip can also be examined.

One possibility for generating chip roots is to mount a lathe tool so that it can rotate and to move it away by an explosion. Another option is to use springs. In addition, predetermined breaking points can be made in the workpiece, whereby the entire chip root and parts of the workpiece are severed. In addition, baffle plates are used to brake either the workpiece or the tool.

The (constant) acceleration required for braking results from the permitted braking distance , which is around 10% of the chip thickness , and the cutting speed . The following applies: