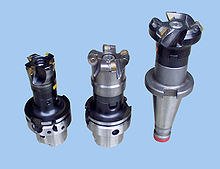 Milling cutter with indexable inserts. (The plates are golden yellow, at the top of the tools).

The tools for metal-cutting production processes , together with the tools for dividing and those for the abrasive production processes, count as cutting tools . The tools for machining consist of three parts: a shaft, a handle for manual tools or a machine interface for machine tools and the part that is effective during machining, the cutting part . It is wedge-shaped and penetrates the workpiece material during machining. For chip formation to occur at all , it has to be harder than the material. Its geometry can either be known as when machining with geometrically defined cutting edges ( turning , milling , drilling ...) or unknown as when cutting with geometrically undefined cutting edges ( grinding , honing ). In the case of the latter, the tool consists of numerous small, hard grains that have been joined with a binding agent to form grinding wheels or honing stones.

Tools for machining with a geometrically defined cutting edge

Two large groups of tools can be distinguished for machining with geometrically defined cutting edges. With solid tools, the tool consists entirely of a single material. In modern production, however, mainly tools are used in which the cutting part consists of a hard indexable insert that sits on a tougher and cheaper shank. These plates can either be soldered on or clamped, screwed or caulked, which enables the plates to be changed quickly. The solid tools and the tools with soldered indexable inserts must be reconditioned when they are worn by tool grinding . The materials from which the cutting parts or indexable inserts are made are known as cutting material.

Tools for grinding and honing consist of so-called abrasives . With the cheap corundum and silicon carbide , the tools consist entirely of the respective abrasive. With the expensive, so-called extremely hard abrasives, cubic boron nitride and diamond , the grinding wheel consists of an inexpensive base material that is coated on the outside with the actual abrasive. The reconditioning of worn tools is called conditioning . It can be divided into dressing and subsequent cleaning. The dressing itself can be divided into profiling and sharpening. Profiling is about giving the grinding wheel a certain external contour, while sharpening changes the microstructure of the tools so that they have better cutting abilities again.

Because of the high cutting speeds and the high cutting forces , tools used in machining are subject to considerable mechanical and thermal loads. Several wear mechanisms occur at the same time, the relative proportion of which is primarily influenced by the cutting speed. These include mechanical friction, oxidation and abrasion as well as diffusion and scaling , especially at high speeds . In the case of tools for machining with a geometrically defined cutting edge, a distinction is made between several signs of wear. The two most important are the flank wear and crater wear on the rake face . The same causes and mechanisms of wear occur in tools for grinding and honing. The wear is shown here on the one hand in blunted grains. However, these can also break and thus acquire a new sharp edge, which is known as self-sharpening. In addition, whole grains can break out of the tool, as a result of which, on the one hand, new sharp grains of the layer below are used, and on the other hand, the tool slowly loses its shape so that it has to be profiled again.

The service life is the time until a certain service life criterion is reached. Only the time is measured during which the tool is actually used. Workpiece change times, for example, are not included. Mostly serving as life criterion width of wear or scour depth . Both depend on whether the tool is to be used for roughing (rough machining) or finishing (fine machining). The tool life depends on numerous factors, such as the workpiece material, the forces and the cutting material. Frederick Winslow Taylor made the cutting speed a parameter that has a significant influence on the tool life and developed the Taylor straight line named after him . According to it, the cutting speed results from the two constants and from the tables.