The cutting force (old:) is the force that acts on the tool during cutting . It is broken down into several components: Of particular importance is the cutting force in the direction of the (English of cut = cut.) Cutting speed acts. Since it is the largest component in terms of amount, it is often limited in practice to just determining it. Further components are, for example, the feed force in the direction of the feed speed and the passive force that is perpendicular to the other two components.

The cutting force is created by the friction that occurs during machining and the cutting off of the chip. Their size is determined by numerous influences. The most important are the geometry of the cutting wedge , in particular the rake angle and the tool setting angle , the chip thickness , the feed rate and the material of the workpiece. The amount of the cutting force is required, among other things, in order to design machine tools for their drives. The required cutting power can be calculated from the cutting force and cutting speed , which roughly corresponds to the required total power:

However, the specific cutting force is not a constant. Like the cutting force, it depends on numerous influencing factors. The most important is the chip thickness . In addition, there are various analytical models from Ernst, Merchant and Hucks that are based on the shear plane model , which itself is based on plastomechanics . The central variable here is the shear angle , which indicates the inclination of the shear plane in relation to the tool orthogonal plane . In addition, the finite element method (FEM) can be used to simulate forces, powers and other variables. They are very complex and the results come very close to the actual relationships.

The amount and direction of the cutting force and its components are required for the construction of machine tools . This concerns the dimensioning of the drives, for which the effective power required for machining is required . It results from the sum of the cutting performance and the feed rate .

They are calculated as the product of the respective speeds and the associated cutting force components:

In addition, with knowledge of the cutting force, it is possible to determine the forces acting on the frames and guides of machine tools and thus ensure sufficient rigidity of the components. Modern CNC machines can measure the forces occurring during machining and compensate for expansion of the frame and the tool holder. Furthermore, the cutting force is required in the work preparation in order to determine the planned cutting parameters (feed rate and cutting depth) and other cutting conditions such as the cutting speed. The cutting force can also be used to explain the processes and wear mechanisms of the tools involved in chip formation . Finally, it is also a benchmark for the machinability of a material, as difficult-to-machine materials generally also cause higher cutting forces.

The cutting force arises from various resistances. This includes the friction between the rake face of the tool and the chip that runs off it and the friction between the workpiece and the flank, especially when tools are worn. Furthermore, the chip must be separated from the workpiece and sheared in the so-called shear zone. Therefore, the cutting force increases as the (shear) strength of the material increases.

Components of the cutting force

The cutting force is generally inclined in space. In order to be able to describe its location, it is broken down into several components:

In general, the vectors of the active force and the passive force add up to the cutting force:

Influences on the cutting force components 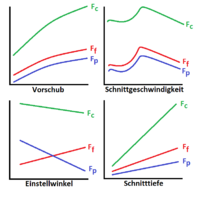 The cutting force and its components depend on numerous influencing factors. The most important are the workpiece material, the feed rate and the cutting depth. Further influences are the cooling lubricant , the ratio of cutting depth to feed, the tool setting angle , cutting speed, the rake angle , the cutting material (tool material) and wear.

The clearance angle and the corner radius have no significant influence. The tool wear can have various effects. In the case of main flank wear, the friction of the workpiece on the flank increases and the cutting force increases. If crater wear is mainly present, the rake angle increases with increasing wear, which leads to decreasing cutting forces.

Approaches to determining the cutting force

Various approaches have been established to determine the cutting force and its components. They can be divided into three groups:

In practice, mostly empirical models are used. They are well suited to determine the forces within a limited area of ​​validity. However, the limits of validity are not easy to determine. Analytical models usually offer less precise results for the specific individual case, but clarify the relationships between important variables. FEM models are very computationally intensive and can only be calculated with computers. In return, they deliver very precise results. However, the modeling effort is high.

The specific cutting and cutting forces are not constants. Like the cutting force, they are also dependent on many influencing factors. The most significant is the influence of the chip thickness. Although it looks similar to the general definition of mechanical stress , it is an energetic quantity. It can be shown mathematically that it is identical to the specific cutting energy. This is the work that is required to remove a certain volume .

The following applies to the cutting force:

In practice, the values ​​for and the increase value are usually taken from tables. Otherwise they can be determined by experiments. In the early 20th century, the values ​​for direct were often determined experimentally, for example by the Committee for Economic Manufacturing (AFW). After Kienzle's method became known in the middle of the century, the missing values ​​for were no longer determined, so the tables have remained incomplete. A rough calculation for is 4 times the tensile strength for h = 0.8 mm and 6 times for h = 0.2 mm. Another empirical formula results from the chip thickness compression and the tensile strength . The specific cutting force then corresponds approximately .