The mechanical stress (symbols σ (small sigma ) and τ (small tau ), English stress , French contrainte ) is a measure of the internal stress on a body as a result of its external stress . Since there is no risk of confusion with electrical voltage within mechanics , it is briefly referred to as voltage .

The mechanical normal stress σ on an imaginary sectional surface A ( area ) through a body is the related component F n of an external force F ( force ) acting perpendicularly on it :

The mechanical shear or shear stress τ in an imaginary sectional area A through a body is the related component F A (transverse force) of an external force F :

, (Approximation equation: shear stress is not constant over the surface and is always zero at the surface).

The mechanical tension has the same physical dimension as the pressure , namely force per unit area . In liquids and gases at rest, pressure is a normal stress that acts equally in all spatial directions.

With a uniform tensile or compressive load on a rod , the stress is evenly distributed over the cross-sectional area. The normal stress, i.e. H. the stress under normal force loading due to tension or compression results from

where the force is in the direction of the surface normal and the area of the rod cross-section. For the true stresses this is the area of ​​the deformed bar and for the nominal or engineering stresses the nominal value of the undeformed initial bar cross-section , see tensile test . The stress tensor always has 3 normal stress components (for all three spatial directions); if this is positive in one spatial direction, there is tension in this spatial direction, and in the case of compressive stresses, the normal stress component in this direction is negative.

With constant uniaxial bending in the main axis of inertia , the formula is simplified to:

wherein the bending moment around the y-axis, the area moment of inertia about the y-axis, the distance from the neutral fiber (with σ B = 0), the maximum or minimum occurring distance between the focal axis to extreme fiber and the moment of resistance is, see beam theory . The following sketch illustrates this using a cantilever : 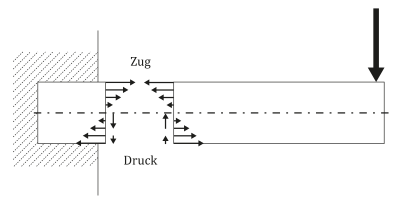 In the case of torsion of bars with a circular (ring) cross-section, the shear stress is:

The formulas for bending and torsional stress assume linear elasticity .

The tensor calculation allows the stress state to be described initially independently of a certain coordinate system and only after a derivation of the respective calculation method (such as the formulas above) to adapt the geometric properties of the body, for example in cylinder coordinates as in the case of torsion.

With regard to the standard basis , it corresponds to the stress tensor. The meaning of the indices is shown in the sketch of a volume element that has been cut out. In the double index , the first index indicates the direction in which the normal vector of the cutting surface points, and the second index indicates in which direction the stress acts. The stress tensor, multiplied by the normal unit vector of a section surface, gives the stress vector on this surface (force vector per unit area):

With the “current” or “true” Cauchy stresses, the matrix is symmetrical , so that, for example, τ xy = τ yx and therefore the transposition (·) T can be omitted in the above formula .

If the stress matrix is ​​set up in a different coordinate system, then its components change in a characteristic way, just as the components of a geometric vector change when the base system changes. However, the amount of the vector does not change and the stress tensor also has so-called invariants that do not change when the base is changed. The following invariants are particularly important for the stress tensor:

The diagonal elements σ xx , σ yy , σ zz in the stress matrix represent the normal stresses , i.e. the stresses that act perpendicular to the coordinate surface. In other words: the normal and effective directions are the same.

The off-diagonal elements τ ij are called shear stresses . They act tangentially to the surface, so they represent a shear load .

For every state of stress in equilibrium, three pairs of perpendicular directions can be found by transformation of the principal axes , in which no shear stresses occur during tension and compression, see pictures. The main stresses σ 1,2,3 act in these main stress directions .

The principal stresses can be calculated by solving the equation , where E is the 3 × 3 identity matrix . Multiplying the determinant det leads to an equation of the third degree in σ, the solutions of which represent the principal stresses sought. They are the eigenvalues ​​of the stress matrix S and are all real because the matrix is ​​symmetrical. A hydrostatic stress state exists when the three principal stresses are equal. (There are no shear stresses here.)

The respective main stress direction results from the equation , whereby the calculated main stress is used. The solutions are eigenvectors of the stress matrix S and indicate the direction of the principal stresses. In normalized form, they form an orthonormal basis of three-dimensional space or can be orthogonalized accordingly. In the main stress directions, the cutting stresses are extremal. The family of curves of the main stress lines are called stress trajectories .

The Mohr stress circle gives a graphic impression of the dependence of the normal and shear stress on the normal direction in the plane spanned by two main stress directions. The main shear stresses

are critical shear stresses and occur in cutting planes that are normal to the bisector between the main stress directions. Let σ 1 be the greatest and σ 3 be the smallest principal stress. Then is the maximum shear stress

The xy-plane will be spanned by the 1 and 2 main stress directions as in the pictures. Then the principal stresses and the principal shear stress for a given stress state are in this plane

Hooke's law establishes the relationship to deformation for elastic deformations . The most important material constants are the modulus of elasticity , shear modulus and Poisson's ratio .

The plastic deformation is described by the flow condition , the flow law and the hardening law. In the main stress space, in which the main stresses are plotted on the coordinate axes, a stress state represents a point or a vector that can be broken down into two components:

A solid body can also have internal stresses that occur without external forces acting on the body.

In general, the deformation behavior of a body depends on its shape and the properties of the materials from which it is made. The material properties are described mathematically in a material model by a relationship between stress and strain tensor as well as their rates and time courses. With the material models, the stresses in it can be calculated for a given body, its bearings and loads. The rheology , materials science and theory of materials dealing with the flow and deformation behavior of materials and make it possible tensions calculation to determine.

Newton's viscosity approach establishes the relationship to the rate of deformation in linear-viscous liquids and gases ( fluids ) . The most important material constant is the dynamic viscosity . The cause of the viscosity is the friction and the impulse transport between the fluid elements.

With laminar flow and a sufficiently large Reynolds number , the viscosity of the flowing fluid can be neglected in the majority of a flow field . Here the dominant stress in the fluid is pressure. The total pressure is divided into dynamic and static pressure . The dynamic pressure is fed from the kinetic energy of the fluid elements. The static pressure is the pressure felt by a fluid element moving with the flow. It is described in gases with equations of state and in the case of the ideal gas by gas laws .

When the boundary layer separates , the wall shear stress can disappear or even act against the external flow. Such detachments can have dramatic effects when they occur on airfoils or in jet engines .