A Newtonian fluid (according to Isaac Newton ) is a fluid (i.e. a liquid or a gas) with a linearly viscous flow behavior. With these fluids, the shear rate is proportional to the shear stress . Such fluids, such as water and air, are characterized by a load-independent viscosity . Their movement obeys the Navier-Stokes equations .

Behavior deviating from this is called non-Newtonian and is the subject of rheology . Examples of non-Newtonian fluids are blood , cement paste , quicksand, and ketchup . The deformation behavior of such materials can no longer be described simply by Newton's law (see below).

A Newtonian fluid is a liquid or a gas whose shear stress is proportional to the shear rate in a laminar flow process . For isotropic, incompressible Newtonian fluids, the simple equation applies (which is called Newton's law ):

Many materials do not behave in an ideally viscous manner and therefore cannot be correctly described using Newton's law. This applies, for example, to viscoelastic materials. These substances are called non-Newtonian fluids. The viscosity of non-Newtonian fluids changes in particular with the shear rate and / or the duration of loading.

Classification of the non-linear behavior 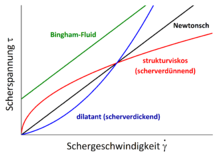 Shear thinning can manifest itself in many different ways. Many structurally viscous substances have a yield point, a shear stress, below which they behave elastically. The zero viscosity , i.e. the viscosity at a shear rate of zero, is infinitely high for these substances. The simplest representatives of this category are Bingham fluids , in which there is elastic behavior up to and above Newtonian behavior.

Many substances also show a change in viscosity over time with constant shear stress. If the viscosity decreases with the duration of exposure and increases again at rest, one speaks of thixotropy , in the opposite case of rheopexy . If the relaxation is incomplete, i.e. if the initial viscosity is not reached again, for example with yoghurt that was previously firm, then one speaks of partial or fake thixotropy or rheopexy.

A common example of a non-Newtonian fluid is created by mixing water and starch (also called "oobleck"). To do this, small portions of cornstarch are stirred into a cup of water. When the suspension approaches the critical concentration, the dilatance becomes apparent. The application of force, for example by poking your finger or turning the cup quickly, causes the mixture to behave more as a solid than a liquid. Slower and gentler exposure, for example gently inserting a spoon, will leave the substance in a liquid state. It is even possible to walk or hop on this liquid. Punches are completely absorbed and there is no splash at any point.

Blood miracles such as that of St. Januarius of Naples , where solid blood turns into liquid, are based, according to experts, on the physical properties of a non-Newtonian liquid. A recipe for the production of a blood-like liquid with non-Newtonian properties from iron (III) chloride hexahydrate and calcium carbonate in water was already known in the Middle Ages .