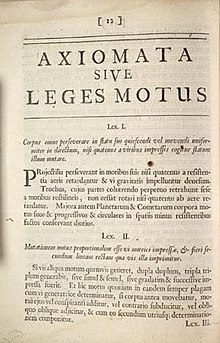 Newton's first and second laws, in Latin, from the original 1687 edition of Principia Mathematica .

These laws form the foundation of classical mechanics . Although they do not apply unreservedly in the context of modern physical theories such as quantum mechanics and relativity, they can be used to make reliable predictions within a wide range of validity .

Usually the following three laws are mentioned, which in a very simplified form read as follows:

Newton already assumed that two forces can be combined with a force parallelogram to form one resulting force. The axiom of the parallelogram of forces is also called Newton's fourth law. In modern literature, on the other hand, the superposition principle is usually mentioned as the fourth Newtonian law.

"A body remains in a state of rest or uniform, straight-line movement, unless it is forced to change its state by acting forces ."

The speed is therefore constant in amount and direction. A change in the state of motion can only be achieved by exerting an external force , for example through gravitational force or the force of friction .

In these forms the sentence is only valid when there is no force at all . The reverse, that no force acts when it moves at constant speed, does not follow from this. In this case, several forces can act on him that cancel each other out. In this case there is no resulting force .

For a mass point, Newton's first law corresponds to the equilibrium conditions . For extended bodies, the torque balance must also be checked.

Galileo Galilei was the first to recognize the principle of inertia at the beginning of the 17th century and already formulated that the force-free movement could continue in a straight line as far as desired. He used this for the first correct treatment of the movements of bodies on earth in free fall , inclined throw and on the inclined plane . René Descartes gave the first clear formulation as a general principle of force-free movements in 1644, but it was only Newton that applied the principle of inertia to the movements of extraterrestrial bodies. This is also his special achievement: in the works of antiquity, which were still regarded as correct up to the late Middle Ages, it was believed that the movements on earth and those in the sky obey different laws. Newton recognized them as two special cases of a general law. In addition, Newton declared the straight, unaccelerated movement to be the norm. Only when the movement of a body deviates from this, one has to explain this with the effect of forces. Shortly before Newton it was assumed that circular motion would be the normal case.

The above versions only apply if the movement is described in an inertial frame. Newton's first law is then only a special case of the second. In modern works on theoretical mechanics , the reference system is usually first defined and the first Newtonian axiom is then introduced in one of the following versions or similar versions.

It is then determined which properties must apply to inertial systems. (In particular, they must not rotate or be accelerated.) The first Newtonian axiom is thus used as a definition for the concept of the inertial system.

See also : Importance of inertia for important principles of mechanics

Newton's second law is also called the lex secunda or principle of action .

It is the basis for many equations of motion in mechanics :

"The change in movement is proportional to the effect of the moving force and happens in the direction of the straight line in which that force acts."

Formally, this relationship between force and change in motion is expressed as

The point above a letter is the notation introduced by Newton in another context for the temporal change of a physical quantity . The sign in between means proportional , i.e. standing in a fixed relationship.

In Newton's original work, expressed in modern terms, the generally applicable formulation (with the impulse ) was already described. Newton's writings work with geometric representations of the limit values ​​of distance and area relationships. The representation is also called the momentum set , especially in literature on technical mechanics and fluid mechanics . In words, it means that the change in momentum of a body over time corresponds to the resulting external force acting on this body. This representation is more general than the Euler form mentioned below, since it also applies to bodies with variable mass. The law of momentum is of great importance when calculating impacts from bodies that can no longer be regarded as point-shaped. It can also be represented in integral form with the impulses and at the time or :

The law was first formulated in this form by Leonhard Euler in 1750 . It is the acceleration , that is a measure of the change in speed.

This equation is often called the basic equation of mechanics - regardless of whether in Newton's or Euler's formulation .

“ Forces always appear in pairs. If a body A exerts a force on another body B ( actio ), an equally large but opposing force from body B acts on body A ( reaction ). "

The principle of interaction is also referred to as the principle of actio and reactio or, for short, " actio equals reactio " (lat. Actio est reactio ). Newton's third law presupposes an immediate action at a distance . Therefore it has no general validity in the special theory of relativity (and thus in electrodynamics ) and the general theory of relativity - here the momentum conservation of the entire system (particles plus radiation) applies . The principle of interaction can also be formulated in such a way that in a closed system the sum of the forces is zero, which is equivalent to conservation of momentum.

“ If several forces act on a point (or a rigid body ) , these add up vectorially to form a resulting force .