Philosophiae Naturalis Principia Mathematica, often also called Principia Mathematica or simply Principia , is Isaac Newton's main work . The Latin title translated means The Mathematical Foundations of Natural Philosophy. The work was first submitted as a manuscript to the Royal Society in 1686 , received permission to print from Samuel Pepys on July 5, 1686, and was published in Latin in 1687. Again and again encouraged by Edmund Halley , the initiator of the work and organizer of the first edition, Newton wrote one of the most influential books on physics and astronomy of all time. 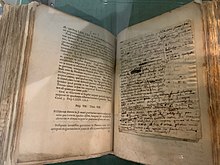 The real impetus for the book came when Edmund Halley visited Newton in Cambridge in August 1684 and mentioned a discussion between him, Christopher Wren, and Robert Hooke in January of that year in which Hooke claimed that the Kepler laws were derived from an inverse-square approach Distance to have derived decreasing gravitational force. Hooke had already made such a force law responsible for the planetary motion in (published) letters to Newton in 1674, as a balancing force for centrifugal force , and Halley had also come to this conclusion, but could not derive the Kepler laws from it. Newton replied to Halley in Cambridge in 1684 that he had already succeeded in doing this, but that he could not find the documents. In November 1685 he sent Halley the derivation in a treatise "De motu corporum in gyrum" (On the movement of bodies in an orbit). There he not only derived the Kepler laws (elliptical trajectory), but also trajectories on other conic sections (hyperbolas, parabolas) and treated the movement of a body in a medium with resistance. Halley reported this to the Royal Society in December 1685 and urged Newton to publish his results. During this time Newton also had contacts to the Royal Astronomer John Flamsteed , who provided him with observation data of the planets. In April 1686 the final manuscript of the Principia was presented to the Royal Society, which (after disputes over priority with Hooke) approved publication on June 30th. The cost of printing took Halley, as the Royal Society their budget for printing costs with the publication of of Francis Willughby originating and John Ray finished work De Historia Piscium, had a natural history of the fish consumed.

Beginning in 1709, Newton worked with substantial assistance from the Plumian Professor of Astronomy at Trinity College , Roger Cotes , on a second edition of the Principia, which was published in 1713, with an extensive and enlightening foreword by the editor Cotes, coordinated with Newton. At that time Newton was employed as head of the Royal Mint and otherwise involved in various priority disputes, especially with Leibniz . In a “General Scholium” at the end of Book 3 in this second edition, he criticizes Descartes and Leibniz. Here you can also find his famous sentence that he would not form hypotheses (“ Hypotheses non fingo ”). The third edition appeared on March 25, 1726 with the collaboration of Henry Pemberton (Newton mentioned in the foreword this time with praise).

From 1739 to 1742 an edition of the 3rd edition with detailed commentary (almost line by line) was published in Geneva , edited by the Franciscans Thomas Le Seur and François Jacquier (but other scientists also worked on it), in which they also used the more modern Leibniz calculus Calculus used. This so-called Jesuit edition was recommended in 1980 by the Newton biographer Richard Westfall as one of the best-commented editions of the Principia. Newton himself had avoided infinitesimal calculus and arithmetic equations in his Principia and presented his mathematical derivations as geometrical proportions. This was based on the classical form of the representation of mathematics since ancient Greece ( Euclid's elements ).

Between 1745 and 1749, Émilie du Châtelet , a friend of Voltaire , wrote a translation into French together with Alexis-Claude Clairaut . It was also Voltaire who circulated the famous tale of the discovery of gravity by an apple falling on Newton. In France, Newton's theories, which by no means met with approval from all contemporaries, only found acceptance in the form of translation and analytical commentary by du Châtelet. Gottfried Wilhelm Leibniz and Christiaan Huygens , two great contemporary scientists on the “continent”, were and remained skeptical until their deaths.

The first German-language complete edition was published in 1872 by Jakob Philipp Wolfers .

The main inner belt asteroid (2653) Principia was named after the plant.

Newton derived the law of gravity in the Principia . He combined Galileo Galileo's research on acceleration and Johannes Kepler's research on planetary motions ( Kepler's laws ) into a unified theory of gravitation and laid the foundations of classical mechanics by formulating the three basic laws of motion . He also introduced the concepts of absolute time , absolute space (based on his famous bucket experiment ), action at a distance and thus indirectly the concept of determinism , all of which have been used for the scientific worldview of many generations up to Albert Einstein's theory of relativity and quantum mechanics were formative.

The roughly 600-page work is divided into three books, the first of which mainly contains the mathematical derivations of Newton's famous laws of motion ( dynamics and gravitation ), while the second, also very mathematically oriented, deals with body movements in viscous liquids. The second book ends with the refutation of the hypothesis that the movements of the planets and their satellites are caused by eddy movements of an ethereal fluid that fills the whole universe . Thus Newton's Principia mathematica from 1687 represents, among other things, an answer to Descartes' Principia philosophiae from 1644, where Descartes tried to justify this in detail in the third section From the visible world in a fluid-mechanical way . With the theory of an infinitely extensive etheric fluid, Descartes had convinced most of the scholars of the time. ( Newton later criticized the ether fluid again in his very influential book Opticks from 1704.)

The third book, entitled About the World System, concerns the application of the knowledge gained in the first two books to the actual movements of celestial bodies, whereby Newton compares his calculations with a large number of measurement data from other naturalists and in this way proves the correctness of his theoretical derivations. With this in mind, Newton introduces the third book with the following words:

“In the previous books I presented principles for physics, but not physical, but only mathematical, namely so that physical things can be treated on the basis of these principles. ... It now remains for us to explain the structure of the world system on the basis of these principles. On this subject I have written the third book in a generally understandable form so that it can be read by quite a few ... "

Newer editions of the Latin original