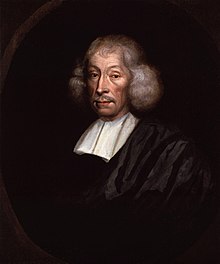 John Ray (born November 29, 1627 in Black Notley , Braintree , Essex , † January 17, 1705 ibid) was a British theologian , classical philologist and naturalist and is also known as the father of English botany . Before 1670 he wrote himself "John Wray". Its official botanical author abbreviation is " Ray ".

John Ray has published important works on the natural history of animals and plants and natural theology .

In his three-volume work Historia generalis plantarum (1686–1704), John Ray summarized the botanical results of his trip through Western Europe from 1663 to 1666 with around 18,000 descriptions of around 6,000 species. His work as an animal and plant systematist provided a basis for the Linnaeus system . In particular, his method of systematising according to morphological characteristics created a new system of botany and established a natural classification. In naming the organisms, he already approached the binary nomenclature . His definition of the species as a reproductive community (1686) was already close to the definition that is valid today.

In 1682 he also differentiated between monocotyledon and dicotyledonous plants and introduced the terms monocotyledons and dicotyledons for them . In zoology he delimited the fish in De Historia Piscium (1686) from the other aquatic animals and thus distanced himself further from the Aristotelian order of habitats. In 1671, Ray was the first researcher to isolate formic acid by distilling large numbers of ants . In an English garden in 1696 John Ray discovered the particularly medicinal peppermint ( Mentha x piperita ).

Charles Plumier named a genus Ian-raia of the yam family of plants (Dioscoreaceae) in his honor . Carl von Linné later changed this name to Rajania . The Ray Society , which publishes books on biology in the UK, was named after him.