This article deals with the term worldview in the sense of the product of a worldview; for other uses, see Weltbild (disambiguation) .

The world view (Latin imago mundi ) is the idea of ​​the tangible reality as a whole, which is more than the sum of its parts. In a narrower sense, it describes a model of the visible world. A more objective and theoretical accent can prevail over a subjective and practically understood " world view ".

The first evidence of the German expression is the translation by Martianus Capella , De nuptiis Philologiae et Mercurii by Notker . There the Latin forma ideaque mundi is translated as uuerlt-pilde and thus refers in a platonic sense to a carved image that stands for the ideas whose realizations the finite world depicts.

Worldviews in the sense of cosmological ideas 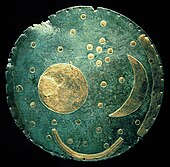 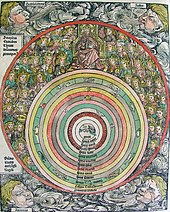 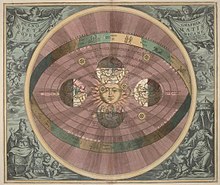 The question of how the world as a whole is structured already preoccupied people in prehistoric times. The Nebra Sky Disc from the Bronze Age is the oldest representation of the sky .

The Babylonian worldview shaped the conception of the world in antiquity. Among other things, it was taken over into the Jewish tradition and is therefore handed down to us in the first account of creation in the Old Testament . The earth is therefore a flat disk , which is surmounted by a heavenly vault (the firmament ). The heavenly bodies are "lights" that are firmly attached to the firmament. The land masses of the earth are surrounded by an ocean. Outside the sky dome is also water.

However, this worldview was refuted in antiquity and the spherical shape of the earth was recognized. Aristotle reasoned conclusively in his work On Heaven why the earth must be a sphere. Eratosthenes was the first to succeed in calculating the circumference of the earth from astronomical observations. However, in ancient Greece and based on it until the end of the Middle Ages, it was believed that the earth was in the center of the world. This geocentric view of the world , founded by Claudius Ptolemy , described the orbits of the sun, moon and stars as epicycles . It agreed well with the observations but was very complicated.

Nicolaus Copernicus recognized that the orbital calculations are considerably simplified if one assumes that the focus is not on the earth but on the sun. However, since this heliocentric view of the world was in contradiction to the teaching of the Catholic Church at the time, it was rejected by it. Tycho Brahe developed a world view (see tychonic world model ) in which the earth was the center. The planets did not circle around the earth, but around the sun, which in turn moved around the earth. Johannes Kepler was able to use Brahe's observational data to prove that the heliocentric worldview was correct. However, he also recognized that the planetary orbits were not circles - as Copernicus assumed - but ellipses. Galileo Galilei supported Kepler's laws with his observations and defended the heliocentric worldview very aggressively, which brought him into conflict with the church. He explained the obvious discrepancy between the words of the Bible and scientific knowledge by saying, “The purpose of the Holy Spirit is to teach us how to get to heaven, not how heaven moves.” Since then, this has become emancipated scientific worldview ever further from biblical ideas.

Isaac Newton was able to give a physical explanation for the shape of the planetary orbits with his theory of gravity . At that time, the stars were still considered unchangeable (hence the name fixed stars ). Until the 20th century, nothing changed in the idea of ​​a never-ending infinite universe . Even Albert Einstein added a cosmological constant to his general theory of relativity in order to save the worldview that had prevailed until then. He later described this trick as “the greatest donkey”, because astronomical observations by Edwin Hubble and theoretical considerations by Alexander Friedmann made it clear that the cosmos is not static, but is actually expanding . This immediately led to the realization that the world did not exist for infinite times, but rather emerged from a singularity about 13.7 billion years ago , the Big Bang .

While in ancient times the earth was still in the center of the worldview, according to today's ideas it is only a very small planet of an ordinary star in a perfectly average spiral galaxy . The fact that the conditions here seem so perfectly set up for the development of life is explained by the anthropic principle : “Only because the conditions were favorable for the development of intelligent life can we think about our development today, otherwise we would not be here . "

Giordano Bruno's (1548–1600) postulate that there is no center of the world, that the world is neither geocentric nor heliocentric, but that all stars are distant suns, had an impact on the medieval social order. The previous world view of a hierarchically ordered world (nobility (kings) and clergy (popes) at the top / center of the hierarchy, simple people (peasants, craftsmen) at the bottom of the hierarchy) began to falter and was finally replaced by the idea that all people are equal ( Enlightenment , 17th / 18th century).

Pierre Teilhard de Chardin (1881–1955), French Jesuit, who considers biological evolution to be compatible with religious ideas, advocated in The Multiplicity of Inhabited Worlds (1953) that there must be millions of humanities scattered through the heavens. Teilhard said literally: “Based on what we know today about the number of worlds and their inner evolution, the idea of ​​a single hominated planet within the universe has in fact already become almost as unthinkable as one without genetic relationships to the other living beings The anthropomorphic centrism often assumed by Teilhard is a misinterpretation of his point-omega theory, which never referred to humans, but always to life in the entire cosmos. Whether this type of (anthropomorphic) centrism is valid - it is called into question by various quarters ( Konrad Lorenz (1903–1989), The Eight Deadly Sins of Civilized Humanity (1973)) - is controversial. In any case, the Seti project is currently looking for extraterrestrial intelligent life.

Worldviews in connection with religious ideas

The oldest worldview that has come down to us in this way is that of religion in the Paleolithic , as it is presented in cave and rock paintings , burials and idols . Already in the Neolithic there was a massive change due to the new agrarian and nomadic shepherd economy. The city-states that are now emerging then develop these worldviews further up to the Bronze Age and the territorial states that then emerged for the first time. In doing so, they are based on the now increasingly expanding knowledge of astronomy and other developing natural sciences and become part of the increasingly systematized and politically established religions and the priesthood developing in them , while also developing philosophical systems (e.g. in ancient Greece). The development over antiquity, the Middle Ages and the modern age as well as in the corresponding cultural phases in the non-European area is from now on mainly determined by religion and power politics. This is true until very recently with the worldviews on which the ideologies are based, which are now often dominated by philosophical elements ( Marxism , capitalism , materialism , etc.), after the religious representatives exercised their authority of interpretation after the end of the Middle Ages parallel to the development of the modern Science and technology have gradually lost. The often backward-looking worldviews of modern sects or esotericism , but also of orthodox Islam and Judaism, represent a counter-development .