This article deals with the relationship between two sizes. For the technical term proportions, see the ratio equation .

There is proportionality between two variable quantities if they are always in the same relationship to one another.

Occasionally one speaks of direct proportionality as opposed to indirect, inverse, inverse or reciprocal proportionality , in which one quantity is proportional to the reciprocal of the other; instead of the ratio, the product of the two quantities is constant. The graph is a hyperbola and does not go through the zero point.

The calculus of the rule of three assumes a proportional function.

"And the sizes with this ratio should be called in proportion."

A proportional function is a homogeneous linear assignment between arguments and their function values :

with a constant proportionality factor . The factor does not make sense here.

Since it is in proportionality equivalent whether the size of the size by multiplying apparent with an ever same factor, or vice versa from further applies

the factor is not allowed.

Accordingly, proportionality is present precisely when this ratio is constant; if it is real, it can be positive or negative . 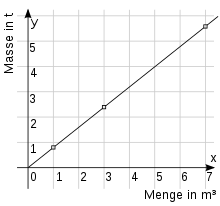 Function graph for a proportional relationship

The table indicates the mass of different volumes of oil:

The three value pairs are marked as points in the picture (right). If you calculate the quotient , mass / volume, you always get the same value 0.8 t / m 3 . In general, the quotient indicates the gradient of the straight line and is also the proportionality factor of the assignment, here with the meaning of the density of the oil. The reverse quotient is also a constant of proportionality, in this case with the meaning of the specific volume . In the example you get

and with the constant of proportionality for these changes , see barometric height formula .

The minus sign means: When climbing a staircase (positive ) the pressure decreases (negative ).

For "a proportional to b" use the tilde symbol "~":

The spelling is also standardized:

The sign is derived from the medieval »æ« for Latin aequalis , the predecessor of the equal sign .