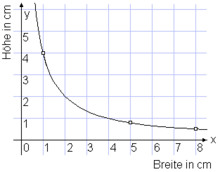 Function graph of a reciprocal proportional relationship: height and width of rectangles with area = 4 cm 2

The constant product of two quantities and is known from a value pair ( , ). Then one size can be specified as a function of the other:

The diagram opposite shows the two pairs of values ​​as marked points. At the hyperbola you can read off other rectangles of equal area, e.g. B. 1 cm wide, 4 cm high.

Further reciprocal relationships may be mentioned:

Processes of chemical kinetics of the first order , whose rate constant depends on the temperature according to the Arrhenius equation, should serve as an example

The equation can be rewritten as

If a process actually proceeds in accordance with the Arrhenius equation as a first order reaction, it can be seen that, in a representation in the above is coated with linear partitions, a straight line is formed, see Arrhenius plot . The activation energy for this straight line results from its rise .

For "a is inversely proportional to b" one writes briefly with one of the two proportionality symbols: