The title of this article is ambiguous. A use of the term in mathematics is described in the article Rigid Bodies (Algebra) .

In classical mechanics , the rigid body is an idealized model based on a non- deformable body . The body can have a continuous mass distribution or it can be a system of discrete mass points (e.g. atoms , molecules ). Non-deformability means that any two points on the body always have the same distance from one another, regardless of external forces. Deformations such as deflection , compression , elongation or internal vibrations are thus excluded.

In reality there are no rigid bodies, as every body deforms under the action of forces. However, the deformations are often so small that they can be neglected for calculations and this idealization is effective.

The model of the rigid body is used in many ways, especially in the sub-areas of statics and kinematics of technical mechanics , as well as in robotics , the design of chassis and motors , see multi-body system and multi-body simulation . The gyro theory is the science of the rotation of rigid bodies.

In technical mechanics there are numerous variants of the rigid body, which differ in their expansion and their loads. There are also composite rigid bodies.

Almost one-dimensional bodies are beams and rods. With them, the length is significantly greater than the width or depth.

If individual rigid bodies are connected to one another by joints or force elements, one speaks of a system of rigid bodies.

Pure rotation of a rigid body

Derivation: At constant rotational speed, the point runs through a circle with the circumference in time , i.e. it has the speed . This is equal to the amount of the vector ( cross product ) (cross product), which also indicates the direction of correctly. This consideration also applies to every other vector rotated along with it, e.g. B. for the basis vectors of a body-fixed coordinate system. Their rate of change is

Likewise, a certain axis and a certain angle of rotation belong to every finite rotation. Several finite rotations performed one after the other are equivalent to a single finite rotation, the axis of which, however, cannot be determined with the vector sum of the individual axes of rotation. In the case of successive rotations about different axes, the final state also depends on the sequence. However, this does not apply to infinitesimal rotations, see the entry on the commutativity of the addition of angular velocities . Therefore the angular velocity has the vector character, which is essential for the simple mathematical description. In addition, all particles of an extended rigid body have the same angular velocity, see there.

Instead of the axis of rotation and the angle of rotation, a finite rotation is often parameterized using the three Euler angles . They are the angles of rotation of three rotations around defined coordinate axes, which are executed in a defined order and thus result in the rotation under consideration. This representation is often better suited for concrete calculations. It can be converted into the representation with a vectorial axis of rotation and angle of rotation, but the formulas have little practical meaning. Further parameterization options for rotations can be found in the entries Quaternion , Rodrigues Formula , Euler-Rodrigues Formula and Orthogonal Tensor . 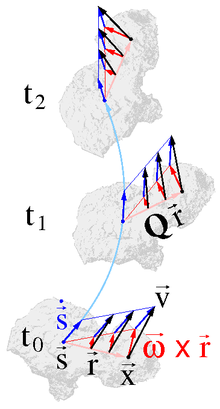 The movement of the body can be broken down into a uniform translation of all particles of the body (and thus also the body's center of gravity) and a rotation, see picture. The translation is described by the movement of a reference point (blue in the picture) around which the rigid body rotates.

In the three-dimensional calculation of the speed leads one at the time t at the location contained particle of the rigid body to the Euler rate equation :

The acceleration results from:

Let be the function that gives the point in space at which a particle P of the rigid body is at time t . For a captured particle P describes its trajectory through space. Let S be the reference point whose path line is given. The line connecting the particle P to the reference point S executes a rotation that can be described with an orthogonal mapping ( rotation matrix in coordinate space or actually orthogonal tensor in Euclidean vector space ):

The vector ( referred to for short in the figure ) points from the reference point S to the particle P at a certain point in time . The time is chosen arbitrarily but fixed. Correspondingly, the identity matrix is 1 and for each rotation matrix it also applies where the transposition is marked. The motion function of the particle P is thus:

The speed of the paricle is derived from the time derivative , which is noted in Newton notation with an over- point :

The angular velocity matrix is due to

skew-symmetric and has a dual vector in three-dimensional space for which applies:

With this dual vector, which here represents the angular velocity , the velocity field results in a Lagrangian representation:

The velocity of the paricle P at the location is what, in Euler's representation, leads to Euler's velocity equation :

The time derivative of the velocity field in Lagrangian representation gives:

or in three dimensions with the dual vector:

The acceleration of the paricle P at the location is what can be written in the Eulerian representation as already stated above:

The above statement becomes clear here: The argument of the velocity and acceleration field is a point in space and not the particle P that is there.

Degrees of freedom and configuration space 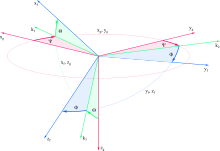 The degrees of freedom of an n -particle system form a so-called configuration space . In the case of rigid bodies, this is composed of three degrees of freedom with regard to the position and three more with regard to the orientation. In addition to various stationary coordinate systems that allow a description of the position, the Euler's angles offer a way of describing the orientation, which is particularly important in the aerospace industry .

Obviously, every restriction of the possibility of movement now reduces the number of degrees of freedom. If, for example, a mass point of the rigid body is spatially fixed, the origin of the reference system can be placed in this. This eliminates the three degrees of freedom of translation. This reduces the movement to a simple change in orientation and only three degrees of freedom remain. If another point is held, the body can only rotate around a fixed axis of rotation and thus has only one degree of freedom, namely the rotation around this axis. If you finally define a third point of the body that is not on the axis of the first two points, it also loses the last degree of freedom and is therefore motionless. Any further spatial fixation of points now leads to a so-called static overdetermination , which plays an important role in statics .

Approaches to determining the equation of motion

According to the model assumption, constant distances between the particles apply. A few conclusions can be drawn from the principle of emphasis :

Often, the model is also based on other idealizations, which allow the introduction of so-called conservation laws to determine the equation of motion:

If a closed system is assumed, it follows from the law of conservation of momentum that the vectorial momentum of the system is constant with respect to its center of gravity:

Designate in the two formulas

In non-closed systems, the change in momentum corresponds to the resulting force acting from outside, and Newton's second law applies :

Furthermore, according to the principle of swirl, the change in angular momentum is equal to the resulting external moment. With regard to the center of gravity of the body or an unaccelerated reference point, Euler's equation applies :

If a conservative force field is used, it follows from the law of conservation of energy that the total mechanical energy is constant:

A deformation energy , which would still have to be added in the case of non-rigid, elastic bodies, is omitted here by definition .

Uniqueness of the angular velocity

The angular velocity is independent of which point is chosen as the reference point for the rigid body movement. So if two different formulations

exist for the same movement, then is - at least in non-one-dimensional bodies. Because the speed of the first reference point can be expressed with the second speed field:

Comparison of the speed fields shows:

The concept of the rigid body is inconsistent with the predictions of the theory of relativity , since according to it the entire body always reacts to forces and torques at the same time, which implies that their effects spread within the body at infinite speed, in particular faster than the vacuum speed of light c . In the case of real bodies, on the other hand, effects usually propagate at the specific speed of sound for the body , which is far below c.