Rotation of a body as a sequence of three individual rotations around its body axes z, x ', z ".
Own coordinate system: red
Fixed reference system: blue

The Euler angles (or Euler angles ), named after the Swiss mathematician Leonhard Euler , are a set of three angles that can be used to describe the orientation (rotational position) of a solid body in three-dimensional Euclidean space . They are usually referred to with or with . The body can be, for example, a top (in theoretical physics) or a vehicle, a ship or an airplane. In astronomy, the "body" can also be the orbit ellipse of a celestial body.

The rotational position is produced by the body from its original position out successively by the three Euler angles to coordinate axes rotated is. There are various conventions for choosing the axes:

The rotation made up of the three individual rotations can be described by a matrix that can be represented as the product of three elementary rotation matrices . Depending on the application, different matrices are considered:

Rotations have been described by three angles since around 1600 at the latest. Thus, certain Johannes Kepler in the Astronomia Nova the Mars orientation of the web with respect to the ecliptic by three angles. An algebraic description with which the rotational position of any point could be calculated was only formulated in increasing depth by Leonhard Euler from 1775 . In the first work he showed that the nine coefficients corresponding to the elements of the mapping matrix are not independent of each other because of the length accuracy of a movement , but are determined by only three independent angles. However, these are not the Euler angles dealt with here, but pure arithmetic variables without geometric significance. This work is particularly well-known today because in an addition he proved the rotation theorem named after him , according to which every movement with a fixed point is a rotation around an axis. The mapping equations resulting from this result, in which a rotation is parameterized by the direction cosine of the axis of rotation and the angle of rotation, he found in a second work shortly thereafter.

Angle , , from the work of Euler

In a third, posthumously published work, he finally introduced three angles , and , with which he described the transformation from body-fixed to spatial coordinates and which, except for signs and additive constants, correspond to the angles named after him today. His approach differed significantly from the method used today, in which one coordinate system is converted into the other coordinate system by three successive rotations around the coordinate axes. Euler argues similarly to the first paper, but comes to a more favorable approach with the three angles , and because here - in modern parlance - he used not only the orthonormality of the rows but also that of the columns of the transformation matrix. In order to clarify their geometrical meaning he looked at the intersection points , , the spatially-fixed coordinate system with the unit sphere and the corresponding intersection points , , of the body-fixed system, and showed that the cosines of the sheets , , ..., just the coefficients of the transformation equations. So it is the angle between the - and the - axis. In addition, spherical trigonometry shows that the angle at is in the spherical triangle and the angle at is in the spherical triangle . Today the corresponding angles are not measured from the plane, but from the nodal line perpendicular to it ; the relationship with the Euler angles most commonly used today for the rotation sequence xyx is given by , and .

Lagrange brought two derivatives of the transformation equations in the Mécanique Analytique published in 1788 . The first is essentially identical to that of Euler, except for the names of the angles (he calls them , and ). The second is in line with the modern, treated in detail below representation for the zxz-rotation sequence - again with different angle names ( , , ).

The - -plane and the - -plane intersect in a straight line (node ​​line). This is perpendicular to the -axis and on the -axis.

In physics, the standard x convention is mostly used. Instead here , and the angles are usually with , and referred.

The rotation that turns the system into the system can be split into three rotations. With the standard x convention these are:

With these rotations, new coordinate systems are created one after the other:

Such a breakdown into rotations, each of which is rotated around the co-rotated coordinate axes, is called intrinsic rotation sequence.

Euler angle at extrinsic singles twist in the order - - with the angles , , . blue : starting position of the coordinate system, red : target position, green : intersection of the two xy planes.

The mapping matrices for rotations around the coordinate axes (elementary rotation matrices) are:

The rotation matrix of the composite rotation is obtained by matrix multiplication from the matrices of the individual rotations. Since the elementary rotation matrices describe the rotations around the original coordinate axes, the extrinsic rotation sequence is used

and receives the mapping matrix

There are six different ways to choose the axes for actual Euler angles. The first and third axes are the same for all of them. The six options are:

With the cardan angles (after Gerolamo Cardano ) or also Tait Bryan angles (named after Peter Guthrie Tait and George Hartley Bryan ), the three rotations take place around three different axes. As with the actual Euler angles, there are six possible rotation sequences: 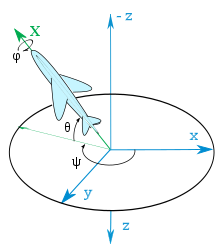 Yaw, pitch and roll angles as the attitude angle of an aircraft

Extrinsically, this corresponds to the sequence - - (roll-pitch-yaw angle).

described. The reverse transformation from the spatially fixed to the body fixed coordinate system is described by the transpose of this matrix. (Actually the inverse, but with rotating matrices the inverse is the same as the transposed matrix.)

In the earth-fixed coordinate system, the weight vector has only one component (in the direction of the center of the earth):

In a physically correct manner, the weight force also acts backwards (in the negative direction) if the pitch angle is present in the aircraft .

Matrix derivation in the general case

For any choice of the rotation axis sequence, the resulting rotation matrix can easily be derived using the following relationship (active rotations):

The turning matrices around the global axes are known. If it is now to be rotated again around an axis that has already been rotated, then this corresponds to the rotation matrix around the corresponding global axis, but in a transformed vector base . The transformation matrix ( base change matrix ) is the previous rotation.

In three active rotations (A is executed first, then B, then C) results in the total rotation matrix using , .

This representation shows that the rotation matrix for any rotation sequence in consecutively rotated axes results from the simple multiplication of rotation matrices around global coordinate axes - but in the reverse order.

The coordinate system obtained with the axes , and is the so-called body-fixed system. The angles and indicate the position of the axis in relation to the system fixed to the body (“rotation” and “tilting”); the angle describes the rotation of the body around it. The following naming conventions correspond to this:

The mapping that assigns the associated rotation matrix to the Euler angles has critical points at which this assignment cannot be locally reversed and one speaks of a gimbal lock . In the case of the above With the x or y convention, this always occurs when the second rotation angle equals zero and the rotation vector of the first rotation is the same as the rotation vector of the second rotation. But this means that there are any number of Euler angles for a rotation around the -axis .

The critical points are included in the definition of the position angle according to the aviation standard .

According to Kurt Magnus , gyro problems that are possible cannot be described with Euler angles (x-convention) and cardan angles are used instead.

Texture pole figures made of gamma-TiAl in an alpha2-gamma two-phase alloy.

In theoretical physics , Euler's angles are used to describe the rigid body . The known cardanic suspension of the technical mechanics is a practical application .

In vehicles, the Euler angles of the main positions are called roll-pitch-yaw angles .

In astronomy , Euler's angles are known under other terms as an orbital element of an object .

In computer graphics , Euler's angles are used to describe the orientation of an object.

In solid-state NMR , the Euler angles are used for the theoretical description and for the simulation of spectra.

Wikibooks: The Mechanics of Rigid Bodies , The Euler Angles  - Learning and Teaching Materials