The crystallography (alternative spelling crystallography ) or crystal science is the science of the crystals , their structure, formation or production and their properties and possible applications.

The first approaches to a systematic recording of minerals can be found in Theophrastus of Eresos (371–287 BC) and especially the crystals in the work Naturalis historia by Pliny the Elder (26–79 AD), which, for example, has the octahedral crystal habit and describes the extreme hardness of diamonds . In his book De natura fossilium , published in 1546, Georgius Agricola classifies minerals according to their physical properties and comments on their geometric shapes. Johannes Kepler arrived at his analysis of the structure of the hexagonal snowflakes in his work Strena seu de nive sexangula1611 on the so-called Kepler's conjecture , which contains the best possible packing of spheres.

The first scientific investigations on crystals concerned their external shape and their geometric properties. So discovered Nicolaus Steno in 1669 the law of the angle Konstanz , alleging that angle between crystallographic same areas of the same Minerals are always the same size. In 1801 René-Just Haüy formulated the “ Law of Decrescence ” and the “Law of Symmetry”; he was the first to introduce the concept of symmetry in a formal definition into crystallography.

Max von Laue was able to prove that crystals have a three-dimensional periodic structure with the help of X-ray diffraction in 1912. The determination of the structures of simple inorganic crystals such as sodium chloride (NaCl) was soon carried out by William Henry Bragg and William Lawrence Bragg . In the following decades, this method enabled the clarification of the crystal structure of deoxyribonucleic acid by Rosalind Franklin , James Watson and Francis Crick (1953) and that of insulin by Dorothy Crowfoot Hodgkin (1969) as well as the discovery of five-fold axes of symmetry ( quasicrystal ) in a rapidly cooled aluminum -Manganese alloy by Dan Shechtman and coworkers (1984).

The year 2014 has been declared the International Year of Crystallography by the UN . The importance of crystallography is also demonstrated by the fact that 29 Nobel Prizes have been awarded to date for groundbreaking advances in crystallographic techniques and the results resulting from them.

Crystallography is a materials science that determines physical and chemical parameters of crystals and studies the physicochemical processes that occur in them. The crystals examined can be of natural ( minerals ) or synthetic ( e.g. ceramics , metals ) origin. It can not only be inorganic but also organic substances, in particular biological macromolecules such as proteins . Although most of the crystals known today belong to the latter group, historically crystallography is a branch of mineralogy from which it arose. However, it has expanded into other areas of science as an important method, e.g. B. as a branch of structural biology . 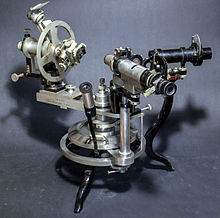 A two-circle goniometer for measuring crystal angles . The reading accuracy on the partial circles is better than a minute of arc

Methods of geometric optics such as reflection goniometry are used to investigate the shape of crystals , in which the angle of reflection of the light is used to determine the position of a crystal surface in space. A standard method for determining the optical properties of crystals ( light refraction , birefringence , pleochroism , bireflectance , anisotropy effects ) is polarization microscopy , which makes use of the findings of wave optics . With the help of the universal turntable , also known as the Fyodorow table , which is an addition to the polarizing microscope, the orientation of the crystals contained in it can be determined by freely rotating the sample in all directions.

Today, X-ray diffraction is the standard method for determining crystal structures, although other methods such as neutron diffraction are now also available. While diffraction methods provide information about the structure of the crystal as a whole, spectroscopy enables the closer environment of individual atoms to be explored. With methods such as IR spectroscopy , Raman spectroscopy , electron spin resonance and nuclear magnetic resonance , the coordination number of individual atoms can be determined and the incorporation of foreign atoms can be detected. 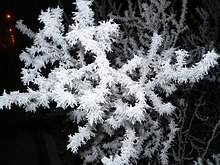 In Germany , crystallography could be studied as an independent subject and as a subject in the mineralogy course . After it has been merged with geology and geophysics , crystallographic teaching content will be imparted in the new joint Bachelor and Master courses “ Geosciences ”. In Switzerland there is a separate course crystallography; there was also this in the GDR . Graduates of these courses lead the academic degree "Diplom-Kristalllograph". Lectures on crystallography are also part of the courses in physics , chemistry , materials science and materials engineering .