A mapping or representation matrix is a matrix (i.e. a rectangular arrangement of numbers) that is used in linear algebra to describe a linear mapping between two finite-dimensional vector spaces .

The affine mappings , affinities and projectivities derived from these can also be represented by mapping matrices.

In order to be able to describe a linear mapping of vector spaces by a matrix, a base (with the sequence of the base vectors) must first be firmly selected in both the original image space and in the target space . When changing the bases in one of the affected rooms, the matrix must be transformed, otherwise it describes a different linear mapping.

If a basis has been selected in the definition set and the target set , then a linear mapping can be clearly described by a mapping matrix. However, it must be determined whether the coordinates of vectors are notated in column or line notation. The more common notation is in columns.

To do this, you have to write the vector that is to be mapped as a column vector (with regard to the selected base).

After choosing a base from the definition set and the target set , the columns of the mapping matrix contain the coordinates of the images of the base vectors of the mapped vector space with respect to the base of the target space: Each column of the matrix is ​​the image of a vector of the original image base. A mapping matrix that describes a mapping from a 4-dimensional vector space into a 6-dimensional vector space must therefore always have 6 rows (for the six image coordinates of the basic vectors) and 4 columns (one for each basic vector of the original image space).

Here, the image vector, the vector is imaged, in each of the members of the selected base their space coordinates.

Use of line vectors

Be a linear map and

an ordered base of .

As a basis for the target amount that is the standard basis chosen:

The standard basis is chosen both in the original image space and in the target space :

With that, the mapping matrix is with respect to the chosen bases and

Alternatively, the following formula results for an element of the mapping matrix

Example: Based on the example above, the elements of the matrix are calculated as follows using the formula

If the elements of the target space are not coordinate tuples, or if another basis is chosen instead of the standard basis for other reasons , the images must be represented as linear combinations of the basis vectors in order to determine the entries in the mapping matrix:

The mapping matrix is ​​then obtained by entering the coefficients of the linear combinations column by column in the matrix:

Example: The linear mapping of the above example will be considered again. This time, however, the orderly basis will be in the target area

This gives for the mapping matrix of with respect to the bases and :

The image vector of a vector under the linear image can be calculated with the aid of the mapping matrix .

or expressed with the help of the mapping matrix :

Execution of linear images one after the other 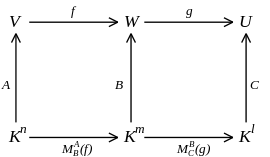 Commutative diagram for an overview

The sequential execution of linear images corresponds to the matrix product of the associated image matrices :

Let , and vector spaces over the body and and linear mappings. In the orderly basis is given in the base and the base in . Then the mapping matrix of the concatenated linear mapping is obtained

Note that the same basis must be chosen for both mapping matrices.

Reason: It is , and . The -th column of contains the coordinates of the image of the -th basis vector from with respect to the base :

If one calculates the right side with the help of the mapping matrices of and , one obtains:

By comparison of coefficients it follows

for everyone and , well

→ Main article : Change of base

Commutative diagram of the figures involved

A linear self-mapping (an endomorphism ) of a vector space is usually based on a fixed basis of the vector space as a definition set and a target set . Then the mapping matrix describes the change that the coordinates of any vector undergo with respect to this base during mapping. The mapping matrix is ​​always square for endomorphisms, i.e. H. the number of rows corresponds to the number of columns.

Description of affine maps and affinities

After choosing an affine point base in both affine spaces , which are mapped to one another by an affine mapping, this mapping can be described by a mapping matrix and an additional shift or - in homogeneous coordinates by an expanded (also: "homogeneous") mapping matrix alone.

In three-dimensional space (with the canonical basis) the orthogonal projection of a vector onto a straight line through the origin can be described by the following mapping matrix:

If a reflection is carried out instead of a projection , this can also be represented with the aid of the above projection matrix. The following applies to the reflection matrix on a straight line through the origin with a normalized direction vector :

where represents the identity matrix. The same applies to the reflection on the plane:

For the reflection at a plane (which goes through the origin) with the normalized normal vector applies:

If you rotate around a straight line through the origin with a normalized direction vector in three-dimensional space , the rotation matrix required for this can be represented as follows:

where again denotes the identity matrix and the angle of rotation.