Halving the link; Half turn

It is an image that is given by a point Z (mirror point, center). The reflection at point Z assigns an image point P 'to each point P of the plane of the drawing or of space, which is determined by the fact that the connecting line [PP'] from point Z is bisected.

Sometimes the point reflection is also referred to as spatial reflection or inversion ; Note, however, that the term inversion is often used for another mapping, the reflection on a circle .

In the plane , the point reflection at the center Z is equivalent to a rotation by 180 ° around the center of rotation Z.

Every spatial point reflection can be replaced by three plane reflections executed one behind the other, the three mirror planes going through the center Z and being perpendicular to one another. The order of these reflections is therefore arbitrary.

In crystallography , a point reflection is called inversion or the point of inversion center and the axes are also called rotational inversion axes and are identified with the Hermann Mauguin symbol 1 .

An axis reflection (also straight line reflection) is given by a straight line a ( mirror axis or axis for short ). It assigns to each point P an image point P ', which is determined by the fact that the connecting line [PP'] is bisected at right angles by the axis a.

The axis mirroring is also a congruence mapping .

If there are two congruent objects in the plane, they can in any case be converted into one another by composition (chaining, sequential execution) of a maximum of three axis reflections. The axis mirroring can therefore be used as a basic concept of the metric geometry of the plane.

In the plane, it should be noted that an axis mirroring changes the orientation ( the direction of rotation) of a triangle. So here it is not an actual “movement”, that is, it cannot be realized by a physical movement without the object leaving the plane.

In three-dimensional space, the axis mirroring corresponds to a rotation of 180 ° around the mirror axis. An object that lies in one plane with the mirror axis is "flipped over" into the same plane; this is the movement that was not possible when constrained to one plane.

For the definition of a perpendicular axis reflection in a pre-Euclidean plane.

In synthetic geometry , a (perpendicular) axis reflection is defined somewhat more generally for more general affine planes , the pre-Euclidean planes . Here we mean by the reflection on the straight line (the axis ) that mapping of the plane on to which each point that point assigns that on the perpendicular straight line to by is, and is determined by the fact that the intersection of these perpendicular straight line with the center of is . Compare the figure on the right: The angle is a right-hand angle , the marked vectors and are inverse to each other, that is, is the center of the line . As a result, the image is clearly defined from below the axis reflection .

The following applies to these vertical axis reflections: 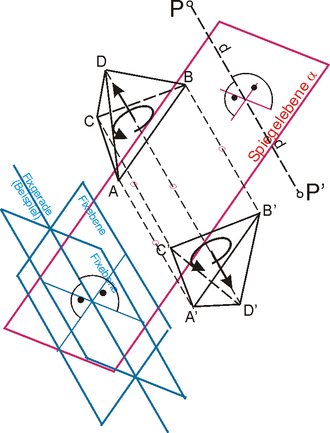 This further type of reflection only occurs in spatial geometry . It is given by a plane  α, the mirror plane . The image point of P is determined by the fact that the connecting path between it and its image point P 'is bisected at right angles by the mirror plane.

The plane mirroring changes the orientation of a simplex ′ . So it is not an “actual” movement either: a tetrahedron cannot be physically converted into its mirror image.

In crystallography , the reflection is denoted by the Hermann Mauguin symbol m.

Reflections in rooms of any dimension

In an n-dimensional Euclidean space there are n types of reflections, namely reflections on 0, 1, ... (n-1) -dimensional subspaces ( mirror elements ).

Fixed points are always the points of the mirror element. Higher-dimensional fixed elements are its subspaces and the subspaces that are orthogonal to it.

This means, among other things, that in the one-dimensional case (i.e. on a straight line) the point reflection is the only possible reflection, and that this, since it reverses the order of the points, cannot be understood as a movement without leaving the straight line.