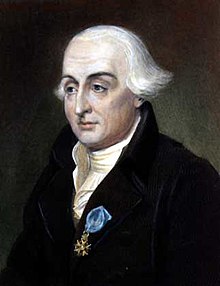 Joseph-Louis de Lagrange (born January 25, 1736 in Turin as Giuseppe Lodovico Lagrangia , † April 10, 1813 in Paris ) was an Italian mathematician and astronomer .

Lagrange founded the analytical mechanics ( Lagrange formalism with the Lagrange function), which he presented in 1788 in his famous textbook Mécanique analytique . Further areas of work were the three-body problem of celestial mechanics ( Lagrange points ), the calculus of variations and the theory of complex functions . He made contributions to group theory (before it existed as a separate branch of research) and to the theory of quadratic forms in number theory . In analysis the Lagrangian representation of the remainder of the Taylor formula and in the theory of differential equations the Lagrange multiplier rule is known.

Lagrange was born as Giuseppe Ludovico Lagrangia. His father was a well-to-do civil servant of French descent, but speculation caused the family to suffer significant financial losses. Lagrange attended the Turin college, where he showed his first interest in mathematics at the age of seventeen, after stumbling across a publication by Edmund Halley . His father wanted him to be a lawyer, but at school Lagrange ended up becoming more interested in math , especially geometry . Within a year he acquired all the knowledge of a fully trained mathematician of his time.

At the age of 19 he received a chair in mathematics at the Royal Artillery School in Turin . Here he published his first scientific work on differential equations and the calculus of variations . In 1757 he was one of the founders of the Turin Academy .

Following the call of Frederick II of Prussia , Lagrange went to Berlin in 1766 as the successor to Leonhard Euler as director of the Royal Prussian Academy of Sciences , of which he had been a member since 1756 . Here he dealt with problems of astronomy , but also with partial differential equations and questions from geometry and algebra .

After the death of Frederick II in 1786, he went to Paris in 1787 as a pensioner of the Académie des Sciences , of which he had been a member since 1772. After a phase of depression, his well-known work on theoretical physics Mécanique analytique appeared here in 1788 ; another publication deals with the three-body problem of celestial mechanics.

Under Napoleon I he was appointed Count and Senator of France. Thereby he met the father of Augustin-Louis Cauchy and became a supporter of Cauchy.

Lagrange is laid out in the Panthéon . It is especially at the Eiffel Tower immortalized .

The lunar crater Lagrange and the asteroid (1006) Lagrangea are named after him.