On April 12th, the Westphalian Theodor von Neuhoff landed with a British ship in the port of Aléria to support the Corsicans in their fight for freedom against the rule of the Republic of Genoa . On March 15th, they proclaimed him as Theodor I, the first and only king of Corsica . According to the constitution passed by Theodor, the hereditary king is dependent on the consent of 24 freely elected Corsicans in the government. He resides in the former bishop's palace in Cervione . In order to secure his power, Theodor I expanded the infrastructure, had coins minted and ensured regular salaries. He returns the goods confiscated from Genoa , re-occupies the uppermost clergy with Corsicans and allows previously forbidden activities such as salt mining and coral collecting. He pushed the Genoese back to their fortified coastal cities and had them besieged there by his generals. However, the Corsicans soon fell out with one another because family honor had absolute priority for them. Among other things, Theodor's most capable general Fabiani is shot from ambush due to a vendetta. Therefore, Theodor left the island on November 11th to gain new supporters. Since the Genoese have put a bounty on him and everywhere are demanding his arrest, he must move with extreme caution. Assassinations are carried out on him in Rome and Paris.

The surrender of Azov 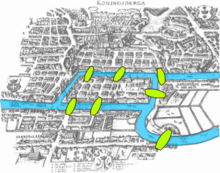 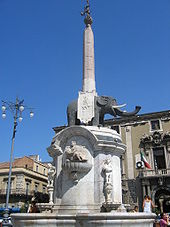 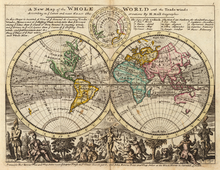 A new map of the whole world with the trade winds , Herman Moll

Prince Eugene's final resting place in the Chapel of the Cross in St. Stephen's Cathedral in Vienna