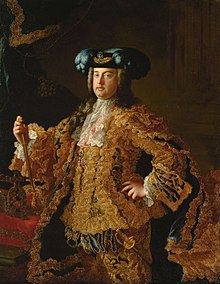 Franz I, Emperor of the Holy Roman Empire, painting by Martin van Meytens (1745)

Signature of Franz I:

Franz Stephan married Archduchess Maria Theresa of Austria in 1736 , the only heiress of Emperor Charles VI. , and with her founded the House of Habsburg-Lothringen . From 1740 he was their co-regent in the Habsburg hereditary lands , but was hardly involved in government affairs. Therefore, he devoted himself to successful financial transactions and the promotion of the natural sciences.

Franz Stephan was the fourth son of Duke Leopold Joseph of Lorraine and his wife Elisabeth Charlotte of Orléans . Through his grandmother Eleanor , he was a great-grandson of Emperor Ferdinand III. and through his mother a great-grandson of Louis XIII. of France . His maternal grandmother was Liselotte von der Pfalz , who was married to the brother of Louis XIV of France , Philip of Orléans . He had Habsburg and Bourbon as well as Palatinate-Wittelsbach ancestors. Together with his brother Leopold , he was prepared early for a military career with the imperial ally. In 1716 Franz Stephan became the owner of the "Young Lorraine Regiment on foot" .

After Leopold died shortly before, Franz became the new Hereditary Prince and traveled on the occasion of the coronation of Emperor Charles VI. to the King of Bohemia in Prague. A first meeting took place on August 10, 1723. Since then, Prince Franz (Anton Stephan) of Lorraine has been referred to as Franz Stephan in the ceremonial protocols, and he himself only ever signed with “François” or “Frantz”. In Prague there was also a meeting with the Empress and her very young daughters. In the end, the marriage to Maria Theresa was agreed among the fathers without being made public.

At the age of fifteen he came to the Austrian court in 1724, where he was to receive the final educational and social polish. Charles VI raised him like a son. Franz Stephan felt very much at home in his second home and, to the chagrin of his tutors, became the emperor's constant hunting companion, took part in festivals, celebrations and balls. The further training and increase of his little knowledge was neglected, which his father registered in distant Nancy with displeasure. After almost six years his stay was interrupted by the death of his father in 1729 and he had to return to his homeland.

Change from Lorraine to Tuscany 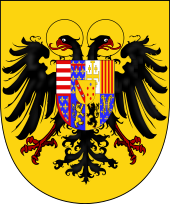 In 1729 he succeeded his father as Duke Franz III. von Lorraine and Bar. On behalf of his later father-in-law Charles VI. In 1731 he made a trip to Holland , England and Prussia . At the beginning of June 1731 in The Hague he was accepted into Freemasonry by John Theophilus Desaguliers , who was specially dispatched by the Grand Lodge of London and Westminster . Franz Stephan traveled to England and received his master's degree at the Maid's Head Lodge in statesman Robert Walpole 's country house in Norfolk. He left England again on December 9th.

As a result of the War of the Polish Succession , which broke out in 1733 after the death of Augustus the Strong , Franz Stephan exchanged his inherited duchy for Tuscany a few years later. In the war, King Louis XV. of France intervened in favor of his father-in-law Stanislaus I. Leszczyński , while Emperor Charles the son of the late king, August III. supported. This finally prevailed, but France demanded compensation for Leszczyński in the peace negotiations. It also wanted to prevent the planned marriage of Franz Stephen with Maria Theresa from uniting a large territory on its eastern border with the Habsburg country complex. At the same time, the extinction of the rulers of Tuscany was foreseeable, as the last Grand Duke, Gian Gastone de 'Medici , had remained childless. The Spanish Bourbons , who were closely related to the French ruling house, claimed his inheritance .

France and Austria therefore agreed in the Peace of Vienna in 1738 to resign Franz Stephan with Tuscany and Leszczyński with Lorraine, which after his death would in turn fall to France. Franz Stephan initially refused to swap countries, but the emperor gave him to understand that in this case he would be refused the hand of his daughter Maria Theresa. His advisor Johann Christof Bartenstein was quoted as saying: "No assignment, no archduchess". The young duke finally agreed and was counted as Francis II in his new territory.

On February 12, 1736, Franz Stephans married Maria Theresa of Austria . In contrast to the usual dynastic connections of that time, it was a real love marriage. The couple stayed in Tuscany for three months and then returned to Vienna.

The emperor granted Franz Stephan a seat in the secret conference , but this could not prevail there. He was also unsuccessful as a soldier. In 1738 he went to the Russo-Austrian Turkish War , but soon returned due to a nervous breakdown .

Franz I., engraving by Martin Engelbrecht

Charles VI died in 1740. Since he had no male successor, his daughter Maria Theresa inherited the Habsburg lands in accordance with the pragmatic sanction issued in 1713 . However, this did not apply to the imperial crown, which is why Franz Stephan was intended for it. Which provided the occasion for the Austrian War of Succession , which with the invasion of the Great Frederick in Silesia began. As the successor of Charles VI. In 1742 the Bavarian Elector Karl Albrecht, who also denied Maria Theresa's claims to Austria and the other hereditary lands and who ultimately claimed them for himself in the War of Succession after initial successes, was crowned Emperor Karl VII . It was the first emperor in more than 300 years who did not come from the House of Habsburg.

Franz Stephan was co-regent in the Habsburg hereditary lands from 1740. Maria Theresa, who declared him to be so, led the government of the Habsburg monarchy mostly herself; The function of co-regent was primarily intended to preserve his dignity before the imperial coronation (which was not yet foreseeable at the time), since otherwise he would have been a prince consort with no function in state affairs.

As a result, Franz Stephan dealt intensively and successfully with the consolidation of the finances of the new House of Habsburg-Lothringen , which he founded together with Maria Theresa and which was to provide the rulers of the Danube monarchy until 1918.

After the death of Charles VII in 1745, his son Maximilian Joseph declared his consent to the election of Franz Stephan as emperor. This took place on September 13, 1745 in Frankfurt am Main . Franz Stephan received the votes of seven of the nine electors and was then crowned on October 4th in the Imperial Cathedral of St. Bartholomew . He had not received the voting votes of Brandenburg and the Electoral Palatinate. As Emperor of the Holy Roman Empire, he called himself Franz I.

Since he was neither busy as Emperor of the Holy Roman Empire nor as formal co-regent of the Habsburg hereditary lands, Franz Stephan found enough time to devote himself to his actual inclinations, namely the natural sciences and his coin and mineral collection. With his Lorraine district he was an important stimulus for natural sciences in Austria. He was also able to bring Gerard van Swieten , the founder of the First Vienna School of Medicine , to Vienna. He also designed the Schönbrunn zoo .

Through clever financial transactions, he managed to amass a huge fortune, with which his son and successor Joseph II was able to restore the state budget. Franz Stephan set up model farms on his estates in Holics on the Hungarian - Moravian (now Slovak-Moravian) border and Sassin in the Hungarian Neutra county (now western Slovakia). He had these managed according to the most modern principles and founded a majolica factory and a weaving mill. He was fond of financial business and became a multi-millionaire.

He used his personal charisma and masculine attraction for various so-called “gallant adventures”, organized secret suppers with his favorites, including Countess Colloredo, the vice-chancellor's wife, and Countess Palffy, a lady-in-waiting of his wife. Their jealousy forced him to limit himself, but he allegedly maintained a permanent extramarital relationship with Princess Maria Wilhelmina von Auersperg , a daughter of his tutor and friend Count Wilhelm Reinhard Neipperg . Known as la belle Princesse because of her beauty , he bought a country house near Laxenburg Castle , where, according to rumors, he spent many evenings with her. However, there is no evidence of the relationship with Auersperg, who is 30 years his junior.

Grave of Emperor Franz I in the Capuchin Crypt

Franz Stephan died on August 18, 1765 shortly after the wedding of his son Leopold II in Innsbruck, suddenly of a stroke or heart attack . His eldest son Joseph had already been crowned Roman King the previous year and was thus designated as his successor as emperor. He succeeded Maria Theresa as co-regent and as Emperor of the Holy Roman Empire.

The funeral ceremony for Franz Stephan was modeled on the funeral services for his father-in-law, Emperor Karl VI. († 1740), determined. After the internal organs had been removed, the body was laid out in public from August 21 to 23 in the giant hall (ballroom) of the Innsbruck Hofburg. The room was lined with black fabric, and the catafalque was surrounded by four altars, at which masses were celebrated. Franz Stephan lay under a black canopy on the catafalk, dressed in a black silk coat with a hat and an allonge wig . He was holding a rosary and the Habsburg death cross in his hands. On the sides were six cushions made of gold brocade with the crowns, medals and decorations he was entitled to. Two urns covered with cloths for the heart and entrails of the deceased were exhibited at the foot of the building. After being laid out in public in the giant hall of the Innsbruck Hofburg, the body was transferred by ship to Vienna, where the second laying in the knights' hall of the Vienna Hofburg only took place with the coffin locked. The burial of the body in the Vienna Capuchin Crypt took place on the evening of August 31, 1765. His heart is in the heart crypt of the Habsburgs in the Loreto Chapel of the Vienna Augustinian Church , the entrails were placed in the ducal crypt of Vienna's St. Stephen's Cathedral. He is one of those 41 people who received a “ separate burial ” with the body being divided between all three traditional Viennese burial sites of the Habsburgs (Imperial Crypt, Heart Crypt, Ducal Crypt). His widow had the death room in the Innsbruck Hofburg converted into a chapel and founded the aristocratic women's monastery in Innsbruck as a prayer community.

Before 1864 in Vienna Inner City (1st district) after the demolition of the city wall beside the Vienna River on the northern edge of today's Charles Square newly created road to the emperor Lothringerstraße named in 1904 in the neighboring districts Highway (3rd) and Wieden (4 . District). The street name is common today in Vienna as the address of the Wiener Konzerthaus and the Vienna Ice Skating Club (see also two lines ).

Franz I and Maria Theresa with their family

Franz Stephan and Maria Theresia had a total of 16 children, eleven girls and five boys: