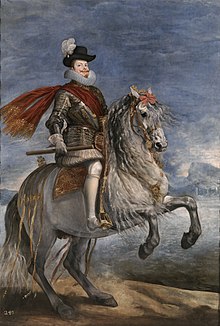 Philip III was born as the fifth son of Philip II of Spain and his fourth wife Anna of Austria . His paternal grandfather (or maternal great-grandfather, see pedigree) was Emperor Charles V.

What had already been announced in 1588 with the defeat of the Spanish Armada , now, ten years later, took shape: the decline of the Spanish Empire began. Philip III, the son of King Philip II, who had led Spain to its zenith, was only like his father in his piety. Politically ignorant, he placed the government in the hands of favorites, above all in the hands of the Duke of Lerma , who led him in 1609 to drive the Moriscos (Moors converted to Catholicism; approx. 275,000) from Spain, which had catastrophic effects on the The kingdom's economy . After all, Philip III. In 1604 a peace was made with England , thus ending the costly war . He signed the Oñate treaty with the Austrian branch of the Habsburg family . He renounced his claims to the successor to Emperor Matthias and received territorial promises in return. He intervened in the beginning of the Thirty Years War by sending Emperor Ferdinand II troops. Philip III died in 1621. 42-year-old after 23 years in government, after having been in poor health for a long time. He was buried in the Pantheon of the Kings of the Monastery of El Escorial .

Philip III, whose parents were closely related (uncle and niece), also married a princess from the German line of the House of Habsburg. The trend towards marriages between members of the German and Spanish line of the House of Habsburg continued in the following generation under Philip IV. This had fatal consequences, especially for the Spanish line of the house. To Charles II. , A grandson of Philip III., Showed a result of centuries of inbreeding between the two Habsburg lines marked degeneration. While a person in the fifth generation normally has 32 different ancestors, there were only ten due to intra-family marriages, and seven of his eight great-grandparents were descended directly from Joan the Mad (see article on Philip IV. ) With the severely disabled Charles II. should die out in the year 1700 the Spanish line of the Habsburgs. Philip III was also involved in this development. complicit in his family marriage.

On April 18, 1599, Philip married his second cousin Margaret of Austria , a daughter of Archduke Charles II of Austria and Maria Anna of Bavaria, in Valencia .

A total of eight descendants resulted from the marriage with Margarete: