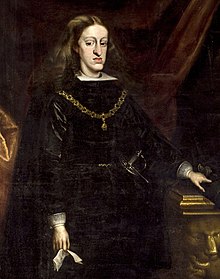 Charles II of Spain (painting from 1685)

Triumph of Charles II on the Grand-Place of Brussels .

From 1665 until his death in 1700 he was king of Spain along with the world empire . As Carlo V he was king of Naples and Sicily , as Carlos II king of Sardinia . Due to clear signs of physical and mental degeneration , he was de facto incapable of governing and was nicknamed "El Hechizado" ( "The Hexed" ).

Karl died without any descendants entitled to succession, which triggered the outbreak of the War of the Spanish Succession (1701–1714) and the beginning of the rule of the Bourbons in Spain .

Infant Charles of Spain was born in Madrid on November 6, 1661 . As crown prince, he carried the title of Prince of Asturias .

He was the fifth descendant and only surviving son from the marriage of the Spanish King Philip IV with his second wife Maria Anna of Austria . This connection was a reaction of the monarch to the death of his heir to the throne Baltasar Carlos , who had died in October 1646, just a short time after the agreement with Emperor Ferdinand III. that he should marry his daughter Maria Anna. As a result, the 42-year-old Philipp decided to marry the bride of his deceased son himself, even though she was his biological niece and only 13 years old. Maria Anna arrived in Madrid in the autumn of 1649, so that she was 15 years old at the time of the marriage. With his mistresses Philip IV had fathered a number of healthy children, whereas the offspring from his marriage to Maria Anna either died shortly after birth or were born dead. After nine years of marriage, only the daughter had Margarita Theresa survived, later similar to her mother with her uncle, Emperor Leopold I was married. The birth of Charles was therefore of enormous importance from a dynastic point of view, as he was the only legitimate male descendant of the king to secure the rule of the House of Habsburg over the Spanish crown. Rumors persisted that Karl was a daughter who had been passed off as a boy for fear of the dynasty's dying out.

From birth Karl was a weak, sick child, in whom the classic Habsburg physiognomy - the characteristic lower lip ( progeny ) and elongated skull shape - were particularly pronounced. He didn't learn to speak until he was four and could not walk until he was eight. Physically impaired in this way, his condition was interpreted in the superstition of the time as bewitched, which is why he was nicknamed "el Hechizado" ( the bewitched ). In addition to the unsuccessful attempts at medical healing, there were also mystical practices and church exorcisms . Karl's condition showed clear signs of degeneration and inbreeding , which could be traced back to the centuries-long marriage policy between relatives of the royal houses: Due to the loss of ancestors , the fifth generation of Karl's ancestors counted only ten people instead of the possible 32 and all of his six great-grandparents came directly from Johanna von Castile ( "the madwoman" ) from.

Considering his poor health, Karl was overly spared as a child. His upbringing was under the Jesuit Juan de Mariana, but the behavior of the Infante was marked by infantilism and mental weakness, which is why he was excluded from higher education.

When Philip IV died on September 17, 1665, Charles inherited his lands and crowns, but since he was only three years old, his mother stepped in as regent and guardian of her underage son. Supported by a government commission ( Junta de gobierno ), she ran government affairs until Charles came of age in 1676 and was under the influence of the Austrian Jesuit Johann Eberhard Neidhardt . The ongoing power struggle between Maria Anna and Juan José de Austria , an illegitimate son of Philip IV, who enjoyed great popularity among the population, led to a political standstill and a lack of decisions. Under pressure from the Spanish grandees, the increasingly unpopular Neidhardt had to leave the country in 1669 and Don Juan José was entrusted with the office of Viceroy of Aragon .

According to the testamentary provisions of Philip IV, Charles should be declared of age when he reached his 14th birthday on November 6, 1675 and take over the government himself. Karl then called his half-brother from Saragossa to Madrid and wanted to appoint him as a leading minister, but was meanwhile changed by his mother and extended her reign for a further two years.

The ongoing conflicts between Maria Anna and representatives of the Spanish nobility led to a manifesto in which on December 15, 1676, the removal of the regent from the king's surroundings, the arrest of the minister Fernando de Valenzuela and the appointment of Don Juan José as advisor to the king demanded. In January 1677 Maria Anna and Valenzuela left the court; Don Juan José was appointed chief minister. He tried to reorganize the monarchy structurally until 1679, but attempts to reorganize the state budget failed due to a plague epidemic . Juan José encouraged the development of the weak half-brother and an improvement seemed to be coming. As a result of the policy of rapprochement with France, Don Juan José mediated the marriage of Charles with the French princess Marie Louise d'Orléans .

After Juan José's death on September 17, 1679, the Duke of Medinaceli became the first minister, who succeeded in stabilizing state finances through drastic currency devaluation and a reorganization of the tax system. This course was continued under the Conde de Oropesa, so that at the end of the 17th century it was possible to overcome the phase of economic depression that had lasted for about eighty years. Various groups at court were interested in a weak king and tried to instrumentalize the monarch for their own purposes, which is why Karl was under the varying influence of competing parties throughout his life. Karl was easy to influence and always followed the whisperings of the environment, which he became dependent on. After Juan José's death, he came back under the influence of his mother. But Karl's second wife, the politically ambitious Maria Anna von Pfalz-Neuburg , also influenced the king in her favor, who was thus degraded to a minor figure in a power dispute between mother and wife. After his mother's death in 1696, Charles's second wife gained a dominant position at the court, but was rejected as a stranger by large parts of the Spanish nobility.

In order to deepen the balance between Spain and France, the marriage of Charles II to Princess Marie Louise d'Orléans was agreed in the Peace of Nijmegen (1678) . She was a niece of the French King Louis XIV , who hoped that this arranged marriage would bring Spain closer to France. One day after the marriage contract was signed, Marie Louise was married by procurationem to Karl on August 31, 1679 at Fontainebleau Castle , whom she first met personally on November 19, 1679. On that day a simple wedding ceremony was held in Quintanapalla near Burgos . On the occasion of this marital union, a public car dairy took place in Madrid , in which 22 people were burned and 60 other corporal punishments were subjected. The marriage of the Spanish royal couple went relatively well despite the difficult circumstances, but remained childless and was probably never consummated. The years of marriage are still considered to be the happiest times in Karl's life; his wife had a positive influence on the king. Otherwise, however, the young wife acted ignorantly and without political ambition and gambled away the sympathies of the people as well as the court through her extravagances. Marie Louise died on February 12, 1689.

Due to the urgent demand for an heir to the throne, Karl's mother, with the Wittelsbachess Maria Anna von Pfalz-Neuburg, got a bride who belonged to the Habsburg party in the Holy Roman Empire . She was a daughter of the Palatine Elector Philipp Wilhelm and his second wife Elisabeth Amalie von Hessen-Darmstadt . The marriage was concluded on May 4, 1690 in the San Diego Convent near Valladolid and also remained childless. Karl's second wife was politically very ambitious and soon won an important position at court, often in opposition to her mother-in-law.

End of life and succession to the throne

Tomb of the Spanish monarchs in the Pantheon of Kings

Due to the lack of male descendants, the rule of the Habsburgs over the lands of the Spanish crown was drawing to a close at the end of the 17th century and the Spanish succession became the subject of general attention in European diplomacy. Charles II no longer seemed to fully understand the political process and was repeatedly forced to sign contradicting contracts and wills. On the initiative of the Netherlands and England , a compromise was reached with France and Austria in 1698 , according to the content of which the Prince-Elector of Wittelsbach, Joseph Ferdinand of Bavaria , a great-nephew of Charles, should receive the Spanish crown. However, the laboriously achieved contract became obsolete due to the sudden death of the six-year-old prince in 1699.

Due to the rapidly deteriorating state of health of the king, who suffered from fainting attacks and impaired consciousness, he was exposed to attempts to influence him by his second wife, courtiers and diplomats. Already seriously ill and hardly capable of his own will, Karl bequeathed the Spanish kingdoms to the Bourbon Philip of Anjou , a grandson of Louis XIV, in his will of October 2, 1700 .

Charles II died on November 1, 1700 in Madrid and was buried in the Pantheon of Kings within the palace complex of El Escorial .

Despite the succession to the throne of Philip of Anjou, who ascended the throne as Philip V ( Felipe V ), the succession was not recognized by all European powers and the War of the Spanish Succession (1701-1714) broke out . The Hague Grand Alliance around Emperor Leopold I, Great Britain and the Netherlands fought France with its allies ( Kurköln , Savoyen , Electorate of Bavaria ). Ultimately, France succeeded in enforcing Philip V as King of Spain, thereby establishing the Bourbon-Anjou dynasty.