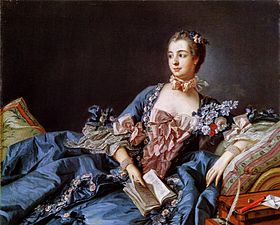 Mistress (from French maîtresse, mistress ), as a historical term in Europe maîtresse en titre, titular mistress, maîtresse régnante, ruling mistress or official mistress, was the most powerful female favorite at the absolutist court.

Shift in meaning and state of research

The meaning of the term mistress changed over the centuries from the outstanding lover in the Renaissance to a political career woman in absolutism and, as a result of the bourgeois revolutions, declined in the 19th century to a term for a prostitution-related permanent relationship of a powerful man. These historical shifts in meaning have resulted in a confusion of meaning, especially since some princes, e. B. Ludwig XIV., August II. Elector of Saxony and King of Poland (Augustus the Strong), Louis XV., In addition to their wife and official mistress, also had changing lovers.

Mistresses have long been considered an unworthy "subject" for research. There are numerous books on them, but only a few scientific studies. In 1982 Helga Möbius called the "strange" institution of the official mistress "something like a court office", in 1991 Gabriele Hoffmann worked on the institution of the mistress as a career position at the absolutist royal court as well as the profile of a successful mistress, in 2001 Thomas Kuster's work on mistresses was published 18th century. From now on, scientific papers on concubines and favorites in the late Middle Ages, favorites in Renaissance France, and the maîtresses en titre in absolutism followed at shorter intervals . The relevant publications agree that the institution of the mistress was only fully developed in absolutism.

The career of the female favorite

Maîtresse en titre only became a king's real or alleged mistress when she was officially presented to the queen at court. She got an apartment and annual payments from the court treasury. Ideally, as a beautiful, educated, witty hostess, she should make the court the center of attention in the country. Mistresses were social climbers . The full career of a successful mistress ranges from the status of a woman in an unsettled position between the bourgeoisie and the lower nobility to marriage to a king: Louis XIV married the Marquise de Maintenon for the second time , Frederick IV of Denmark married Anna Sophie von Reventlow , Tsar Peter the Great married Martha Skawronskaja, who ruled Russia as Tsarina Catherine I after his death . Almost all mistresses were adult women at the beginning of their careers, rarely under 25 years of age and often already married to a man from the lower nobility who might have brought them to court. The trigger for a career was usually a love story that took place in public and was played out. But love alone was only sufficient in exceptional cases to become an official mistress. Anyone who wanted to advance at court needed a party that worked for them. Husbands repeatedly ensured that their wives rose to be the most powerful female favorites, after which they themselves, as prime ministers of the country, became the most powerful male favorites at court. But there are also famous counterexamples of official mistresses who were unmarried or widowed, such as Mademoiselle de La Vallière or Madame de Maintenon ; or in cases where a separation from the husband was effected after the beginning of a relationship with the king, as in the case of Madame de Montespan or the later Madame de Pompadour .

In the 17th and 18th centuries, numerous European princes tried to push the aristocracy and the state parliaments away from traditional co-government and to build up absolutist structures of rule. They relied on people who owed their position at court only to them, on favorites who fell into nothing if they lost royal grace: the ministers, the mistresses and their sons. “The Royal Natural Children” were in the first rank in the hierarchy that Christian V issued for the court in Copenhagen in 1680. This gave them precedence over all the nobles in the country. The king's children with his mistress were an elite group at court who kept the old high nobility in check, who in turn made sure that the bastard sons and the new favorites in general did not become overwhelming. This balance of tension prevented the old and new nobility from uniting against the king. Kings also deliberately took mistresses of a selected nationality in order to underpin their claim to power over an area. After he became King of Poland in 1697 , Augustus the Strong of Saxony took a Polish noblewoman, the Princess of Teschen, as his mistress.

Butterfly thalers from the time of Countess Cosel , mistress of Augustus the Strong . The butterfly is known as the Red Apollo and, despite all open questions, is associated with the Countess.

Absolute kings built their courts into an instrument of rule over the nobility. Nobles were not allowed to exercise civil professions and the employment opportunities for second and third sons largely depended on the favor of the king and his confidants, above all his mistress: one could try to gain access to the king and obtain office and income in the new administration, a command in the army or a paid honorary position at the court.

King and mistress made courtiers out of knights. The Thirty Years' War had brutalized morals. The ladies, above all the mistress, the mistress of the court, set the new tone. They demanded kindness, courtesy, consideration - courtesy. The courtyard became a world of its own, a prominent location to which contemporaries orientated themselves. Louis XIV in particular refined the system of court service. Service to the king became the worship of a god.

At a state festival in 1709 August the Strong of Saxony gave information about how he saw himself, the mistress and the queen: He appeared at a "gods' procession" in the streets of Dresden as Apollo , the god of light, loved by all, as the Savior, protector of poetry and music. He wore a golden sun mask. The mistress Constantia von Cosel was Diana , Apollo's twin sister. Apollo was the sun god, Diana the moon goddess - the most demanding woman in the heavenly heaven, the goddess of the hunt, who handles weapons and fatally punishes a violation of decency by a man. During this parade of the gods, the Electress Christiane Eberhardine of Brandenburg-Bayreuth sat in the chariot of the priestesses of Vesta , the goddess of the hearth fire, of the family and the state, for whom Apollo had freed.

On important official occasions, the mistress appeared together with the king and queen. A mistress should always do the queen the honor she deserves. A queen linked the king with the ruling princes of Europe. Princely marriages were agreed for political reasons. The descent of the queen, her relatives and her inheritance claims increased the prestige and power of a king. Only their children could run his house. Although the spouses often only met the day before the wedding, some brides had hoped for a family life with many children, as was the case at numerous courts. The story of this time is full of unhappy queens who fought alongside a brilliant mistress for their rank at the court and for the love of their husbands.

Open adultery was not a matter of course in many courts, despite the sexual permissiveness. In civil life, adultery between married persons was often punishable by death. In some countries, for example, the question arose whether the adultery of a married prince with a mistress might not be punishable after all. The law faculty of the University of Halle prepared an expert opinion. Reviewers were Christian Thomasius , Nikolaus Hieronymus Gundling and Johann Peter von Ludewig . Their result: The contempt that an extramarital sex community deserves does not apply to great princes and lords, since they are not subject to penal laws, but only have to give an account of their actions to God, and the ruler's resemblance to God also seems to have something to do with his mistresses transfer.

The political influence of the mistresses

The political influence of a mistress was not institutionalized. It could be important in one court and irrelevant in another. Often a mistress was accused of exerting influence by her opponents, who wanted to remove her from the court and make her own candidate maîtresse en titre . In-depth comparative studies on the political influence of European titular mistresses are still pending, so here are three examples:

The political influence of the mistress Maintenon at the court of Louis XIV was probably significant, even if it cannot be precisely defined. Rumors of their power alone increased it. She does not seem to have relied on a political party at court, but was closely linked to the natural children of the king, whose mother was Maitresse Montespan and who had brought up Maintenon. It seems certain that when it came to an award or a post at court, she asked the minister responsible for a meeting before he submitted a proposal to the king. She pushed people forward and established a livelihood, fended off others, and participated in marriages of the royal family.

A political clique at the Dresden court of Augustus the Strong, the Elector of Saxony and King of Poland, pushed the mistress Cosel to him in order to strengthen Saxon influences on his politics. Conversely, August had previously tried to connect with the high aristocracy in Poland through a Polish mistress, but they had become apostate. Cosel now tried to dissuade the king from re-conquering Poland, and she interfered in the prime minister's plans for cabinet reform, both unsuccessfully. When August became King of Poland again, the Prime Minister reproached him for needing a Polish mistress again, and a political clique in Poland pushed Countess Dönhoff towards him. Cosel did not want to tolerate an official mistress in Warsaw and had to leave.

Madame de Pompadour was probably the most glamorous of all mistresses. Louis XV struggled with people he didn't know well, and Pompadour was his private secretary. She promoted scientists and writers, built castles and summer houses, promoted painters, sculptors, cabinet makers , had the porcelain factory built in Sèvres and was a tireless festival master at Versailles. She created a theater and staged 61 plays, operas and ballets. The political cooperation between the king and his mistress was not very successful. In Paris, Pompadour was blamed for all the French defeats in the Seven Years' War. Diabetic pamphlets appeared about her, and when she drove into town, her carriage was pelted with dirt and stones.

The end of an institution

The kings had needed the help of the mistresses in their power struggle against the nobility, but at the end of the 18th century, in the struggle of the citizens against the courts, kings and nobility moved together: the kings no longer needed the official mistresses. With the emancipation of the bourgeoisie and its way of life, Puritanism also gained influence in the 19th century . The courtly ideal of the perfect woman, who trained body, mind and soul, was no longer valid. In retrospect, the titular mistresses became whores.