Norbert Leo Elias (born June 22, 1897 in Breslau ; † August 1, 1990 in Amsterdam ) was a German-British sociologist who lived mainly in England and the Netherlands since his emigration in 1933 . He became a naturalized British citizen in 1952. Long ignored, his work has been widely received since the 1970s. The terms " figuration " and "process and figuration sociology" are associated with his name, denoting a methodological re-shaping of sociology in connection with Karl Mannheim . His work On the Process of Civilization from 1939 (new edition: 1969/1976) is one of the most important sociological works of the 20th century.

Norbert Elias grew up in a middle-class Jewish family in Breslau. He was the only child of the married couple Hermann and Sophie Elias (née Galevski). The wealthy father owned a textile factory that produced suits for wholesale. The successful self-made man retired from professional life before the First World War and became a reindeer . The mother was a housewife and lived a sociable life. Elias said in an interview with Carmen Thomas that the parents were not particularly devout Jews, but the mother kept the household kosher so that his grandparents could eat with them.

Elias, a frail child who was often ill, was raised by governesses and tutored by a tutor during the three years of preschool . His school attendance only began with the sixth of the Johannesgymnasium . In his notes on his curriculum vitae , he emphasized that the time at the Breslau grammar school was a time of great importance for the orientation of his intellectual interests. In addition, for reasons unknown to him, the Johannesgymnasium in Breslau belonged to the minority of the city's high schools, "at which Jewish students hardly felt the pressure of hidden or open anti-Semitic hostility on the part of teachers and classmates." Bourgeoisie determined. The focus was on the classics of Greco-Roman antiquity and those of the Schiller and Goethe times. That is why thirteen-year-old Elias wanted German classics for his bar mitzvah in the edition of the Bibliographical Institute .

On June 8, 1915, he passed the school leaving examination, on June 22, he enrolled at the University of Breslau for the subjects of philosophy and German . On July 1st, like all of his classmates, he volunteered as a war volunteer. He became a telegraph operator , first came to the Eastern Front and then took part in the Battle of the Somme . There he suffered a collapse, was sent back home and no longer fit for field service as a medical soldier in a convalescent battery. At the same time as the medical service, he started studying medicine. On February 4, 1919, he was released from military service. Most of his classmates had died.

Since the beginning of the winter semester 1915/16 he was also a member of the Hasmonaea Breslau in the “ Cartel of Jewish Connections ” (KJV). Even from those days he knew many Jewish German intellectuals of the same age, such as Erich Fromm , Leo Strauss and Leo Löwenthal .

From 1922 Elias worked in a factory for the production of small iron parts as head of the export department in order to finance his studies. In 1924 he received his doctorate as Dr. phil. at the University of Wroclaw. The title of his dissertation is Idea and Individual - A Contribution to the Philosophy of History ; his doctoral supervisor was Richard Hönigswald .

In 1924 Elias moved to Heidelberg and continued his studies in sociology there. He was accepted for a habilitation by Alfred Weber . The work on The Importance of Florentine Society and Culture for the Development of Science was concerned with the development of modern natural sciences . In 1930 Elias broke off his habilitation project and followed Karl Mannheim to Frankfurt am Main . He worked as his assistant at the university there and began his habilitation with the work Der Höfische Mensch .

The habilitation thesis had already been submitted and Mannheim was designated as the reviewer when the Institute of Sociology was closed in March 1933 at the beginning of the National Socialist regime , and Elias' habilitation process was also canceled. The text did not appear until 1969 in a modified form under the title Die Höfische Gesellschaft . Elias went into exile in 1933, first to Paris , then to Great Britain in 1935 . During his eight-month internment as a German on the Isle of Man in the Central Camp ( Douglas ) and in the Hutchinson Internment Camp , Elias performed a self-written drama The Ballade of Poor Jacob in the internment camp in 1940 . Elias was supported during this time by Morris Ginsberg and his friends Evelyn Anderson, who also lived in exile in England, and her sister Ilse Seglow , who had completed her doctorate with Elias, who now tried to get him released and supplied him with groceries and books.

From 1954 to 1962 Elias held a teaching position at the newly established Department of Sociology at the University of Leicester (students were among others Martin Albrow and Anthony Giddens ). It was during this time that his first extensive empirical study of the established and the outsider took place . Before that, he worked for a long time in adult education and dealt with group therapy. 1962 to 1964 he was professor of sociology at the University of Ghana in Accra (student was Willie B. Lamousé-Smith ), then he returned to England, where he lived as a private scholar.

Netherlands and visiting professorships in Germany

The 90-year-old Norbert Elias is honored by the Dutch Minister of Science (1987).

Since 1978 he had his permanent residence in Amsterdam and was visiting professor at various German universities (Aachen, Münster, Bielefeld). Only now - and especially with the success of the paperback edition of On the Process of Civilization (1976) - was Elias' work received and recognized in Germany.

Norbert Elias worked for many years at the Center for Interdisciplinary Research (ZiF) in Bielefeld. Among other things, he worked in the ZiF research group “Philosophy and History” under the direction of Reinhart Koselleck .

Norbert Elias developed an independent sociological theory, the principles of which are expressed in the terms figuration sociology and process sociology .

In order to be able to depict social processes in realistic theories, theories that think “society” in terms of the individual are insufficient, but so are those theories that disregard the individual and proceed from the “whole”. Rather, all sociological research must focus on people and the dynamic social interrelationships that they form with one another: “ The 'circumstances' that change are not something that comes to people from 'outside', as it were; the 'circumstances' that change are the relationships between people themselves ”(Elias in: On the Process of Civilization , 2nd vol.). Elias understands figuration to be an image of human societies that avoids the one-sidedness of “part” or “whole” by depicting society as a connection between individuals ; H. mutual dependencies. In the course of their development, societies can become more complex and have nested levels. So the same people can form different figurations. For example, on the basis of the mutual dependence between the established and the outsider , he explains a figuration that can be further differentiated into the relationship between natives and foreigners.

According to Elias, sociological theories in which social processes are thought statically, i.e. reduced to states and social change is viewed as a sequence of apparently stable states between which there are phases of change, cannot be realistic. He criticized this, for example, at the school of the sociologist Talcott Parsons . Instead, a realistic basic assumption is that reality (and thus societies) knows no states but is constantly in motion. It is therefore necessary to always describe processes in order to be able to form sociological theories. One of its implications is that no single social phenomenon can be understood or explained without a theory of long-term change. He calls for the development of an empirically founded theory of socio-cultural evolution and sees himself only as a pioneer for this.

A distinction between the two terms is only possible to a limited extent, because figurations are also processes and are characterized by their process character. They are therefore basically designed as "social process models". Shortly before his death, Elias had the impression that the concept of figuration developed too close to the concept of system in use and therefore preferred the term process sociology .

With his theory, Elias breaks with the long tradition of thought, in which “society” was contrasted with “the individual thought of as an independent”. His thoughts on the relationship between “society” and “individual”, which can be found in almost all of his works, ultimately lead to a redefinition of terms such as “ identity ” and “ self-worth ”, which are relatively new in the history of sociology View of people as actors with a certain freedom within the framework of the figurations that they form with one another in social processes. In addition, Elias overcomes the traditional scientific division between psychology , sociology and history .

In his studies, Elias opened up new perspectives in particular in historical studies: the development from feudalism to territorialization in Germany, the development of the royal mechanism , the exploration of mentalities that the French school of history around Georges Duby and the journal Annales have developed, and many other findings thanks to him.

Elias expressly values ​​an understandable scientific language , which he increasingly developed even after completing his doctoral thesis (which he later viewed with skepticism in this regard). His concern was also the creation of terms that can serve the new point of view represented by him as appropriate, i.e. precise, "language tools".

Elias is often referred to as the founder of the theory of civilization. However, this title does not do justice to the achievements of the social scientist. He took a position on very different questions of sociological theory formation and on questions of contemporary societies:

To further promote the broad process and relationship-based understanding of social science research, Elias founded the Norbert Elias Foundation in 1983 , which became his sole heir after his death.

The inventory of the Norbert Elias Archive is available in the German Literature Archive. It consists of three parts:

One of the most important online catalogs is the HyperElias © World Catalog. It was created by Ingo Mörth and Gerhard Fröhlich (University of Linz), but does not contain a detailed list of Elias' correspondence.

The Norbert Elias Archive contains, among other things, the previously neglected correspondence between Norbert Elias and Pierre Bourdieu (1976 to 1990). 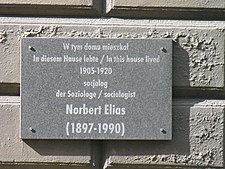 Writings and editions of works

The chronological list of German and English publications with the year of the first publication and other translations can be viewed on the website of the Norbert Elias Foundation.