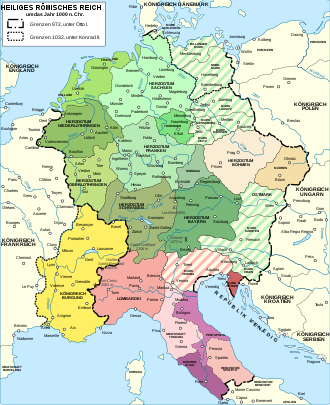 The Holy Roman Empire around 1000 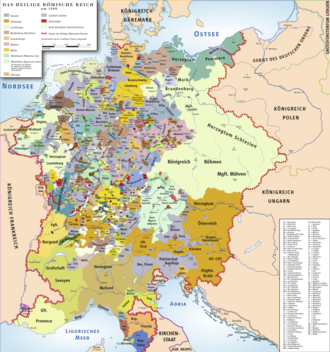 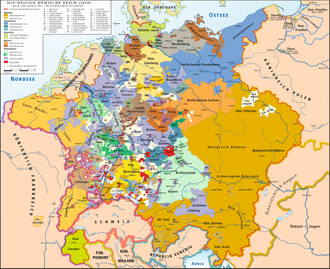 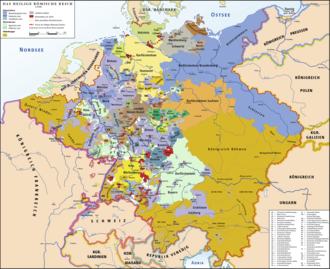 The Holy Roman Empire on the eve of the French Revolution in 1789 (in purple spiritual territories, in red the imperial cities)

Territorialization (of territory , Latin for domination or state) describes in Germany the development and establishment of both secular and spiritual sovereignty from around the 11th to the 14th century and parallel to this the long-term loss of power of the king.

Long-term developments and conflicts of interest

According to Otto Brunner (Land und Herrschaft, 1948), a territory arises when it becomes a politically homogeneous unit, i.e. when all the aristocrats who own the land come to the meetings with the sovereign . The boundaries of a territory thus depend on whether the respective landlords go to the assembly of one or the other sovereign and feel they belong to it. Since disputes were also decided at these meetings, a generally applicable law arose.

The medieval society of feudalism was based on personal relationships of dependency (association of persons ). The feudal lord (king) enfeoffed his followers ( vassals ) with duchies, which ideally should revert to the liege after the death of the vassal. At the same time, however, the vassals were usually anxious to establish themselves in their territory and to pass their rule on to their own descendants. Territorialization means the formation of administered territorial states instead of the previous associations of persons, lords and manors. In the early and high Middle Ages, kings and emperors had no permanent residence ( travel kingship ), were often absent for a long time due to the Italian campaigns and weakened by conflicts with the pope , so that they were often only able to secure the allegiance of their vassals through extensive concessions.

Beginning and development of territorialization

In the 10th century, Emperor Otto I attempted to convert the German tribal duchies into dependent dominions of his empire and to renew the official duchies of the Carolingian era . He had no long-term success with it. Until the middle of the 11th century , the former tribal duchies were more or less dependent on the royal central authority and served the competing nobility as a power base in the struggle for kingship. The rise of the sovereign rulers begins in the second half of the 11th century at the latest, when the power of the king as a liege lord seems to be waning and he has to rely primarily on a large domestic power and on the flourishing cities.

Already the first Salier emperors Konrad II. (1024-1039) and Heinrich III. (1039-1056) tried to counterbalance the powerful dukes by attracting ministerials and promoting the lower nobility and, above all, the prosperous cities. Heinrich IV tried to expand his power in the Rheinpfalz and Rheinhessen as well as in the Harz and expanded the administration with the help of ministerials, which brought him into conflict with the Saxon nobility, especially in the Harz region. With far-reaching privileges for the cities (e.g. Speyer , Worms , Halberstadt , Quedlinburg , Goslar ) he tried to win them over, which he also largely succeeded in doing.

Since the beginning of the 11th century, and intensified in the 12th century, urbanism in Germany took off rapidly. The flourishing cities developed their own administrative and legal forms and developed a self-confident bourgeoisie, became centers of trade and commerce and the engine of economic development and modernization. With their rise came the transition to the money economy. Partly from the 11th century, then increasingly from the 13th century, some cities achieved freedom from their spiritual or secular lord and in some cases exerted considerable influence on imperial politics.

The dispute with Pope Gregory VII in the investiture dispute was used by a considerable part of the high nobility to revolt, which in March 1077 led to the deposition of Heinrich IV and the election of an opposing king ( Rudolf von Rheinfelden ). Rudolf was indeed supported by the Pope, as Henry IV. But by the Canossa had been liberated from the excommunication and he lactated sent, he could end the revolt in October 1080. Rudolf von Rheinfelden found his death. The fact that Rudolf's right hand - the hand of the oath - had been cut off was interpreted by Heinrich's party supporters as a “judgment of God” for propaganda purposes, which additionally discredited and weakened the opposition to Heinrich. In the years that followed, Henry IV significantly expanded his position of power over princes and the Pope.

In the 12th century, Emperor Friedrich I Barbarossa began to establish new, sometimes spatially separated territorial duchies. The dispute with the Guelphs ( Heinrich the Lion ) was also an expression of the basic medieval conflict between central power and "centrifugal forces" ( Norbert Elias ). Friedrich I. Barbarossa gave the Welf Duchy of Bavaria to Otto von Wittelsbach in 1180 : The Wittelsbach rulers ruled Bavaria until 1918. Welfs, Wittelsbachers and other princes further dismembered their territories through real division .

It was not until Emperor Frederick II , who spent most of the time in Sicily and southern Italy, and his son, with royal bulls from the years 1220 ( Confoederatio cum principibus ecclesiasticis ) and 1231 ( Statutum in favorem principum ), the imperial princes the disposal of some of the king Reserved rights ( regalia ) that had previously been granted exclusively to the King, at least pro forma; higher jurisdiction , mint money and geleitrecht by a territory and duties were transferred to the respective ruler. In the second bull, the secular territorial lords were addressed for the first time with the title dominus terræ , which documents the increased legal position of the sovereigns.

At the time of the double election in 1257, two foreign rulers were elected kings of Germany by the electors . Both rulers had obtained kingship through concessions and payments to the territorial princes. Of Richard of Cornwall is said to have tipped "money like water before the feet of the prince". However, he could hardly pursue imperial politics because he had to face domestic political disputes in England. King Alfonso of Castile never entered his imperial territory and let the princes push for territorialization. During this time up to the coronation of Rudolf von Habsburg in 1273, the princes were given the opportunity to rule without a king present.

The high nobility converted their previous rule over people into a rule over land and resources by building castles . In the early Middle Ages, castles were primarily built to protect against external threats, for example from the Hungarians or the Normans . From the 11th to the 14th century a real 'castle building boom' began. Castles were also built - illegally according to today's understanding - on land that did not belong to the owner of the castle, e.g. B. on royal property (by the Reichsministeriale administration ) or on monastery property ( by the secular monastery bailiffs ). "Right-free" spaces that were not defended by others by force of arms were occupied. City citizens and magistrates often endeavored to force the territorial ruler out of the city in order to achieve the coveted status of a Free Imperial City .

The Golden Bull as a milestone in territorialization 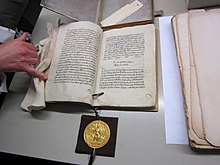 Trier copy of the Golden Bull

The Golden Bull was issued on January 10, 1356 in Nuremberg by Emperor Charles IV and regulates the exercise of territorial power within the territory of the German Empire and determines the circle of imperial / electors who elect the king. The electors are given privileges . Other imperial princes already exercise regalia (royal rights) in some cases , initially without having been confirmed in writing by the king.

The Golden Bull of 1356, which was named after the golden seal attached to it as an imperial or royal document , stipulated:

The Golden Bull documents and formalizes a practice and development that has evolved over centuries towards territorialization, the tradition of which extends into Germany's current federal state structure . 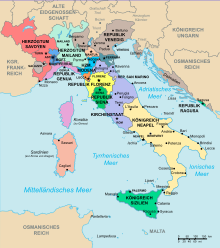 After the invasion of the Goths and the Lombards (488/93 and 568 respectively) the country split up into a number of domains. In the 8th and 9th centuries, especially under Pippin and Charlemagne, the Franks dominated , but under the successors of Charlemagne, a separate kingdom of Italy developed. Since Otto the Great , Italy belonged predominantly to the Holy Roman Empire ( Imperial Italy ), the south remained Byzantine for a long time . However, from 827 onwards, Arabs conquered Sicily and parts of southern Italy. In the early 11th century, Normans (from Normandy) began conquering southern Italy by the end of the 11th century.

Due to the boom in trade and transport, the cities of northern Italy in particular gained increasing independence in the 11th century. The Normans and numerous cities in Northern Italy supported the Pope during the investiture dispute . With the fall of their dynasty in 1268, the attempts of the Hohenstaufen to renew the dwindling imperial power in Italy failed , although Henry VI. the Lower Italian Norman Empire had won through marriage. The south was ruled by the French Anjou dynasty from 1268 and then - like Sicily - dynasties originating from Spain, the north divided into a number of cities formally belonging to the Holy Roman Empire, but almost independent cities with their surroundings.

In the 14th and 15th centuries, during the Renaissance, Central Powers emerged with enormous economic and cultural advantages. Five powers, the southern Italian dual kingdom of Naples and Sicily , the Papal States , Florence , Milan and Venice shared the political power and resources of the peninsula in alternating coalitions.

The territorialization of the Holy Roman Empire continued in the centuries following the Golden Bull of Charles IV, the central power continued to lose its competencies, until the peace of Westphalia in 1648 sealed the division of Germany into independent territories and in 1806 with the abdication of Emperor Franz II. The Holy Roman Empire of the German Nation was formally dissolved, whereby its imperial estates finally achieved full sovereignty .

Due to the increasing sovereignty of the German territories over the centuries, no central state such as B. England or France , which were ruled by a powerful monarchical court, a capital that attracted all resources and thus a political and cultural center. There was no linguistic uniformity and standardization, but the respective territories retained their regiolect and developed largely independently of one another. The territorialization, already ridiculed in the age of enlightened absolutism as " duodec majorities " and branded as " small states " in the age of emerging nationalism , had positive effects in addition to the loss of weight in terms of power politics: the territories built their own universities that taught independently of each other and one played an important role in attracting state officials and scholars, and the many courts vied for prestige by building castles, churches, libraries, state theaters , museums, parks, boulevards and plazas. Although this led to high consumption of financial resources at the time, it was also due to the comparatively (and still existing) cultural richness of the German provinces - similar to Italy .

To this day, Germany is a federal state in which the federal states claim and enforce considerable political influence not only in domestic politics, but also in the European Union and sometimes even in foreign policy .