A year level , also class level , in Austria and Switzerland school level , denotes the totality of classes or courses that started school in the same year or belong to the same learning section.

In Germany, there are up to 13 grades in schools , depending on the respective federal state . The first to fourth grades - in Berlin and Brandenburg the first to sixth grades - are called primary school .

This in turn is followed by the upper secondary level , which comprises grades 11-12 or 13 and which can be attended at a grammar school, vocational grammar school , a technical college or occasionally at a comprehensive school .

The division of school classes according to the age of the students established itself in the course of the 17th and 18th centuries, while the level of education of the student was of decisive importance before that. In the 19th century, for example, the nine-year grammar school was introduced in Prussia , which required pre-school ; from 1925, under the Reich Primary School Act , a comparable basic education had to be provided by the elementary school .

The different age groups used to be designated above the four primary school classes with Latin numerals in the nominative singular feminine. The next class was the sixth (= year 5), then the quinta (= year 6), quarta (= year 7), lower tertia (= year 8), upper tertia (= year 9), lower secondary (= year 10), upper secondary (= Year 11), lower prima (= year 12) up to the upper prima (= year 13). The grades of the originally six-stage grammar schools were counted down from the top, starting with the upper prima as the final class. As is the case today after secondary level I, as a one-year- old you could graduate from the lower secondary school (often abbreviated to UII or U2) or with the Abitur after the upper prima (OI or O1).

In the course of the standardization of the German school system through the so-called Hamburg Agreement in 1964, the Prime Ministers of the federal states decided to abolish the previously customary counting of the classes of a grammar school, starting with the first grade and ending with the ninth grade. The full implementation of the resolution then took until the end of the 1970s. Since then, the counting of the grade level has generally been continued away from primary school.

System of the GDR

The school system of the German Democratic Republic was, like most of the current school system in Germany, divided into twelve grades, whereby a qualification could be obtained either after the tenth or after the twelfth grade. These were grouped under certain general terms, the names of which were changed four times from 1946 to 1971, until this principle was abolished in 1982. 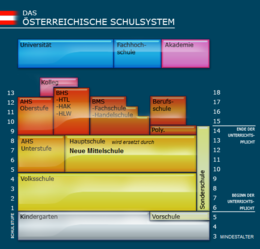 The numbering of the school levels in Austria is continuously from one to twelve (general) or thirteen (vocational schools and special forms). The numbering of the vintages and classes, however, is dependent on the visited school and starts over again from one. A pupil goes back to first class when transitioning to the next type of school, for example from fourth grade elementary school to a general secondary school (AHS) , as well as later in their own upper school or technical schools. If there is ambiguity, the school type is added, such as "eighth grade middle school / AHS" (12th grade, year of Matura).

The lower grades 5–8 of the AHS (1st – 4th grade). This lower secondary level also includes the other middle level schools - Hauptschule and Neue Mittelschule , and some special forms for special educational needs.

In addition, in the curriculum of the AHS, the lesson table 1./2. Grade (5th / 6th grade), 3rd / 4th grade Grade (7th / 8th grade), and 5th- 8th grade Class (upper level) differentiated. You have defined educational goals that can be covered with subjects within the framework of school autonomy , and still make it easier to change schools at the age of 12 or 14.

At the normal age of 16 (10th / 11th grade) there is no significant break in the education system in Austria, at 15 (end of 9th grade) only the end of compulsory education , in which the general compulsory schools end with the polytechnic and special schools .

The historical Latin year names of the middle and higher schools ran in the same direction, i.e. opposite to the German or Swiss classification. They started in today's 5th level (around 10 years of age) with the Prima and continued with the Seconda, Tertia, Quarta, Quinta, Sexta, Septima up to the Octava with the Matura There was no subdivision into "Upper ~" and "Under ~".