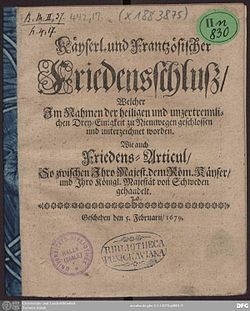 Title page of a print with the peace of Nijmegen between France and Sweden and the empire.

The Peace of Nijmegen includes several peace treaties that were concluded in Nijmegen (Nijmegen) in 1678/1679 and ended the Franco-Dutch war and the wars connected with it.

First, France and the United Netherlands signed a peace treaty. Because the Netherlands withdrew from the coalition against France, Spain and the Holy Roman Empire came under pressure and had to follow suit with their peace agreements. This is how a series of contracts came about:

The contracts provided for:

The peace treaty documents the power of the Sun King , but was partially revised by the Peace of Rijswijk after the War of the Palatinate Succession in 1697 . Due to the peace between the empire and Sweden, the Scandinavian War turned at the expense of Denmark and Brandenburg-Prussia .